Reality: The largest component of gas prices, by far, is the price of crude oil. The United States has very limited control over oil prices.  The best way to pay less for gasoline is to use less of it.

According to the Energy Information Administration (EIA), 68% of the price U.S. consumers paid at the pump in 2011 can be directly attributed to the price of crude oil. The price of crude is set in a global market not by the tax (or subsidy) regime in the United States.

There are several prices for crude.  The front page of PriceOfOil.org tracks the price of Brent crude, as it is used to price roughly two thirds of the world’s internationally traded crude oil supplies.  West Texas Intermediate is the benchmark crude price for the United States and has been recently priced significantly less than Brent because of a surplus of crude available in Cushing, Oklahoma.

It is worth noting that if the Keystone XL pipeline is built it is likely to raise, not lower gasoline prices in the U.S.

More broadly, a Congressional Budget Office (CBO) report in June 2012 showed that the price consumers paid at the pump followed the same pattern in the United States, Canada and Japan. These three countries were important for the comparison because each country has a completely different oil supply and demand dynamic. Canada exports more oil than it consumes, Japan imports all its oil and the United States produces less than half its oil consumption. Yet gas prices in each of these countries followed the same pattern since 1999. 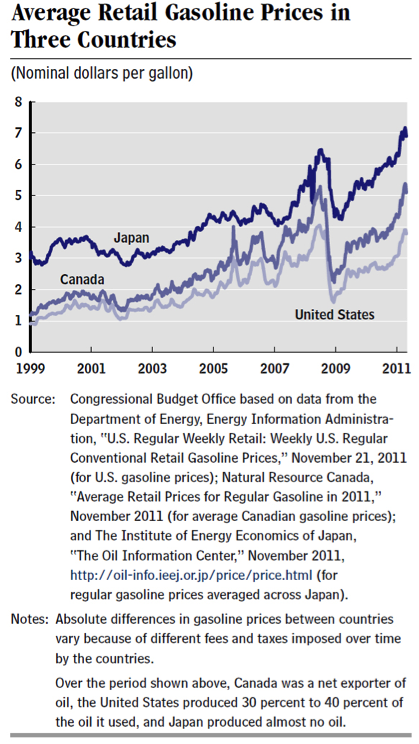 The United States cannot significantly control the global price of oil by taxing its oil industry less or producing more oil.  OPEC, led by Saudi Arabia, applies significant pressure on oil prices by operating a quota system that aims to maintain the highest price the market will withstand. The regimes in place in many OPEC countries rely on lavish social programs paid for by abundant oil revenues for the political stability that keeps them in power. Currently, Saudi Arabia wants oil prices to stay around $100 in order to maintain revenues. If the United States wants to relieve the pressure its consumers feel from $100 oil, it would do better to pursue efficiency over going up against OPEC.