Texas is oil country, and has been for a long time. With headquarters of numerous major oil companies, countless refineries polluting communities all along the Gulf Coast, and oil fields and pipelines criss-crossing the state, the oil industry is truly entrenched in the state of Texas. And the dirty energy money flowing to members of the State Legislature, unfortunately, is in a league of its own.

A Flood of Industry Money

Since 2006, fossil fuel interests have provided $11.86 million in campaign contributions to members of the State Legislature. The Speaker of the House, Joe Straus, has accepted over $1.11 million in dirty energy money alone.

The oil and gas contributions in the state have risen over 80% from already high levels in 2006 to where they are today. Meanwhile, production and reserves of crude oil and natural gas in the state increased significantly over the same time period: 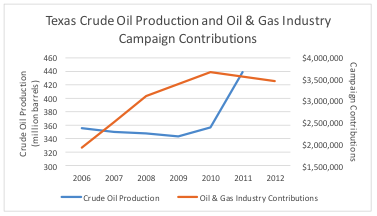 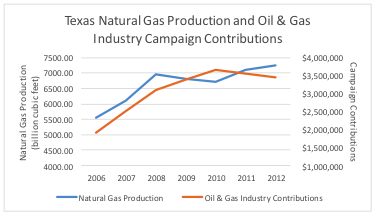 Some topline stats from the dirty energy money database:

House Bill 788, Amendment 2, was a failed to beat back a bill that was essentially promoting denial of climate change by stripping the Texas Commission on Environmental Quality’s references to greenhouse gas pollution as a problem needing attention.

The amendment lost in a vote of 50-91. Representatives voting against the scientific fact of climate change had accepted $5,989,543 in total from the fossil fuel industry. On average, these Representatives receive 3 times more per person from dirty energy interests, than those who voted in favor of respecting climate science.