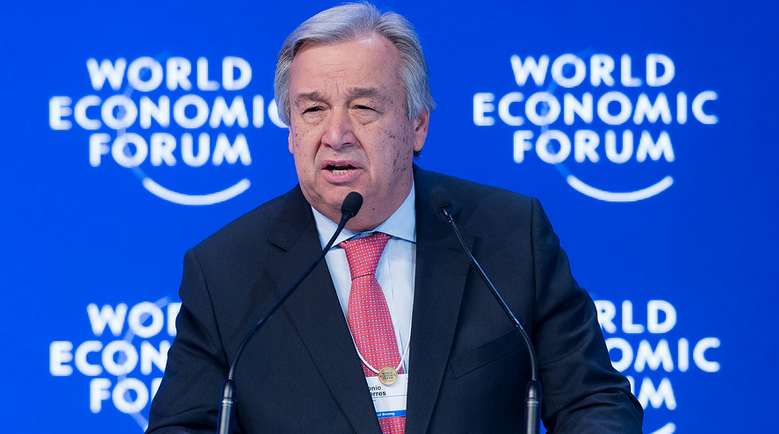 In a blistering attack at the World Economic Forum this morning, the UN Secretary-General, António Guterres, accused the fossil fuel industry of having a “business model” that “is inconsistent with human survival”.

With many oil executives in the audience at the exclusive ski resort at Davos, Guterres launched a stinging and sustained attack on Big Oil and its enablers in a keynote speech.

“The commitment to limit global temperature rise to 1.5C is nearly going up in smoke”, he said, adding that the world was “flirting with climate disasters” every week. Without further action, we will hit a staggering 2.8 degrees of heating, which for many “will be a death sentence.”

The reason for this is that “fossil fuel producers and their enablers are still racing to expand production, knowing full well that their business model is inconsistent with human survival”, he said.

Senior public figures rarely make such a powerful critique of the industry, but Guterres did not stop there. He also brought up the peer-reviewed academic paper published last week in Science, entitled “Assessing ExxonMobil’s global warming projections”.

This groundbreaking research revealed that Exxon had privately “predicted global warming correctly and skillfully” projecting “warming trajectories consistent with those forecast by the independent academic and government models.”

But rather than act on the warnings from their own scientists, the oil giant spent decades publicly rubbishing the science spending tens of millions on right-wing lobby groups to help spread doubt and climate denial and death.

Guterres added: “We learned last week that certain fossil fuel producers were fully aware in the 70s that their core product was baking the planet” but then “Big oil peddled the big lie”. Like many others before him, Guterres likens the oil industry’s tactics to the public relations tactics employed by Big Tobacco to deadly and lethal effect.

He also criticised the rush to “net zero” and companies making net zero commitments. “Benchmarks and criteria are often dubious or murky,” said Guterres. “This misleads consumers, investors and regulators with false narratives. It feeds a culture of climate misinformation and confusion. And it leaves the door wide open to greenwashing.” Reliance on controversial carbon credits was not the equivalent of “real” emission cuts, he said.

He finished by saying that “The battle to keep the 1.5-degree limit alive will be won or lost in this decade. On our watch. My friends, right now, it is being lost.”

Scientists and colleagues responded to the speech. My colleague Romain Ioualalen tweeted:

Amazing speech by @antonioguterres clinically dissecting the responsibility of fossil fuel companies and their enablers in the climate crisis.

'Their business model is inconsistent with human survival" ? https://t.co/bCXGOZ8XUp

Clear words from UN General Secretary Guterres just now in Davos. You can check out the science behind his statement here: https://t.co/TgU85KTT3O @GeoffreySupran @NaomiOreskes pic.twitter.com/B1S7Ga37Lo