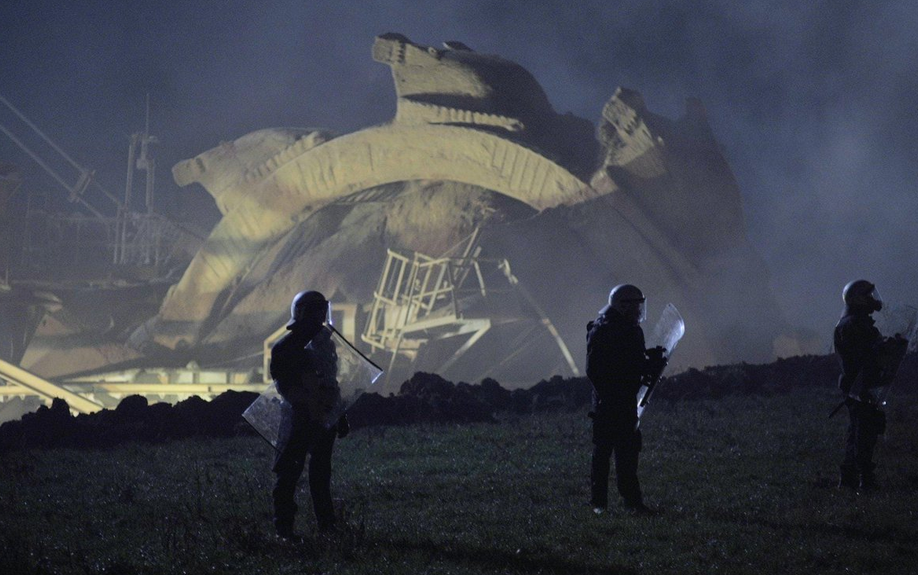 We have been here before. When the state uses overwhelming force and brutality to defend fossil fuel interests from those defending the climate. And we are here again.

The history of grassroots activism against fossil fuels being met with force is long and painful. Think Ogoni in Nigeria, think Standing Rock Sioux and the fight to prevent the Dakota Access Pipeline or the Wet’suwet’en First Nation defending their land against the Coastal Link pipeline in Canada. To name just a few examples.

And we are here again. In 2023. The years may change, but injustice stays the same. Over the weekend, some 35,000 climate activists and land defenders came together to protest against the expansion of the Garzweiler coal mine, Europe’s largest and dirtiest brown coal plant. RWE, which owns the mine, is Europe’s emitter of CO2.

The mine already spans a whopping 35 square kilometers, this vast industrial scar on the landscape reminiscent of the destruction and desecration of the tar sands in Canada.

The latest flash-point is around the village of Lützerath, which is twenty miles west of Dusseldorf. This small German hamlet is the latest community to be lost to our fossil fuel addiction, gobbled up by the ever-expanding coal mine. Lützerath is not alone, some thirteen villages have already been destroyed by the toxic mine.

Activists have been trying to defend the village for years, arguing that coal expansion is not compatible with Germany’s climate commitments. Not only is the lignite in the mine the dirtiest form of coal, but coal itself is the dirtiest fossil fuel. The mine makes no climate sense. It is indefensible.

But still, the German state defends the indefensible. And last week, and over the weekend, it used brute force to do so. The police used overwhelming force and violence against the protesters, with about 20 being injured and taken to hospital.

On Sunday, 350 Deutschland tweeted how:

There has been a shocking amount of police violence against people protesting for climate justice in #Luetzerath, Germany. #RWE’s profits and political deals obviously matter more to those in power than a liveable future on this planet ?. pic.twitter.com/hUse8kfz4u

One of these being violently assaulted by the police was Swedish activist Greta Thunberg, who had joined colleagues from across Europe. Thunberg called the expansion of the coal mine a “betrayal of present and future generations. Germany is one of the biggest polluters in the world.”

Thunberg also criticized the overwhelming force used by the one thousand-or-so riot police to clear a long-standing climate camp in the village, calling it “outrageous.”

The mine is owned by German giant energy company RWE, and its latest expansion was controversially and somewhat surprisingly allowed by the Greens, who are currently sharing power in Germany.

The deal that allowed the mine to expand was a trade-off between RWE agreeing to bring forward its coal phase-out from 2038 to 2030 and saving five more villages from destruction. But now RWE and others say the expansion of the mine is necessary due to the war in Ukraine.

This argument does not wash with climate campaigners. Fabian Huebner, from Europe Beyond Coal, told CNN: “I think the Greens, faced by very difficult decisions, took the wrong turn and de-prioritized climate policy.” He added: “You can’t solve the crisis with the energy source that basically created this crisis.”

The mine’s expansion has thrown up other contentious issues too. Firstly, the new coal may never be needed by Germany. Last August, a report by Coal Transitions found concluded that even if coal plants in the country operated at near capacity until 2030, they already had more than enough coal available from existing supplies.

HSBC is also in the spotlight too. A great investigation by the UK-based Bureau of Investigative Journalism has found that the bank “made a secretive multimillion-dollar loan” to RWE, just three months after the bank pledged to stop funding coal.

HSBC, which claims it is “helping to lead the transition to a more sustainable world”, approved the $340m deal with the energy giant after internal discussions in “which senior figures at the bank recommended that its involvement should not be publicised.”

Climate and social justice activists have understandably expressed solidarity and outrage on Twitter too:

Solidarity to all at #LUETZERATH preventing climate criminals opening a coal mine. & a reminder that people in the global South have faced centuries of extractivism of minerals & metals to fuel the economies of rich countries & are murdered for resisting pic.twitter.com/tvhpkx1i88

Climate justice does not mean destroying nature – our life support system, peoples' livelihoods, or forcefully evicting defenders of #Luetzerath to allow the expansion of a coal mine. Expanding the Garzweiler coal mine means more harm to our planet and people at the frontline. pic.twitter.com/aBiJ6HezVP

Standing in solidarity with #Lützerath, a German village threatened to be demolished for an expansion of a coal mine.

The eviction of #LÜTZERATH is a total symbol of failure of the german and European leaders in the fight for climate Justice, We demand immediate coal exit,lutzerath must stay. #PeopleNotProfit pic.twitter.com/IqvESH7dTs

The Ecocide campaign, which is working to make the destruction of nature a crime, is circulating an image of the mine, asking people to sign the petition.

It states; “We call on all governments to declare support for making ecocide an international crime, in the knowledge that many countries must stand together to put this law in place for the long-term protection of all life on Earth. You can sign it here.” The mine is the perfect example of why Governments should be held to account for ecocide and the violence that so often is entwined with it.

We are working to make the widespread destruction of nature (#ecocide) an international crime.