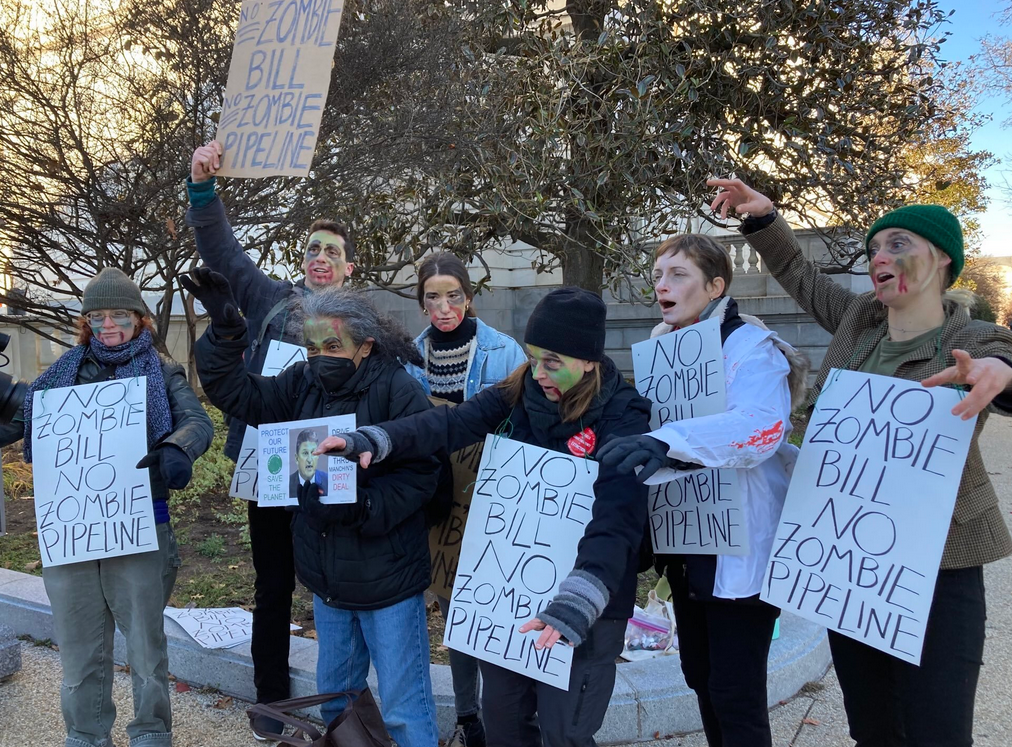 Manchin, who has so often stalled progressive climate legislation on Capitol Hill, tried in vain to attach provisions to the defense bill that would have undermined environmental protections, weakened legal avenues to challenge polluting projects, and fast-tracked fossil fuel infrastructure including the dangerous Mountain Valley Pipeline.

He has been trying — and failing — for over four months now. His original “dirty deal” proposal was withdrawn in September after it failed to secure the needed votes to pass with a continuing resolution.

That defeat didn’t stop Manchin — who receives more fossil fuel money than any other politician — from trying again last week to force through this terrible legislation. But as before, his proposal was met with staunch opposition from progressive politicians and grassroots organisations.

Last Monday, over 750 climate, environmental justice, public health, youth, and progressive organizations sent a letter to House Speaker Nancy Pelosi and other Congressional leaders supporting the bill. In the letter, the groups set out their opposition to Manchin’s “cruel and direct attack on environmental justice communities.”

Other civil society voices urged caution too. Juan Jhong-Chung, Climate Justice Director at the Michigan Environmental Justice Coalition, said, “We will continue to monitor and hold our elected officials accountable and remind them that this dirty deal is no deal for environmental justice communities. We need to follow frontline communities’ solutions to fast track a Just Transition, not a dirty one.”

It seems the fossil fuel industry and Manchin are not giving up and may try and pass some secretive bill. Late last week, E&E News reported that “Sen. Joe Manchin isn’t giving up on trying to pass his overhaul of federal environmental rules,” and this week we are already hearing rumours it could come up for a yet another vote in the Senate.

My colleague Collin Rees has been monitoring Manchin’s antics for months. He has studied Manchin’s new text, and confirms that while this newest version has been altered to make it even worse for clean energy and even better for fossil fuels, Manchin’s two key components remain in the bill: the approval of the Mountain Valley fracked gas pipeline and the fast-tracking of fossil fuel projects across the government. We must not allow this bill to pass.

The fight against the “Dirty Deal” is fierce, but time is on our side. E&E News noted that Manchin’s wily actions had alienated Democrats and failed to win over skeptical Republicans, meaning there was only a “slim chance” of getting the bill over the finish line before the end of this year.

Due to Sen. Raphael Warnock’s victory in Georgia, from early next year, the Democrats will control the Senate 51-49. However, it’s a safe bet that Manchin won’t be going away quietly, and that he will continue working hard for his fossil fuel financiers in the next Congress.

The fight continues, and our Oil Change team will continue watching Manchin’s actions like a hawk and standing alongside frontline and environmental justice communities to defeat this dirty deal and stop the Mountain Valley Pipeline.