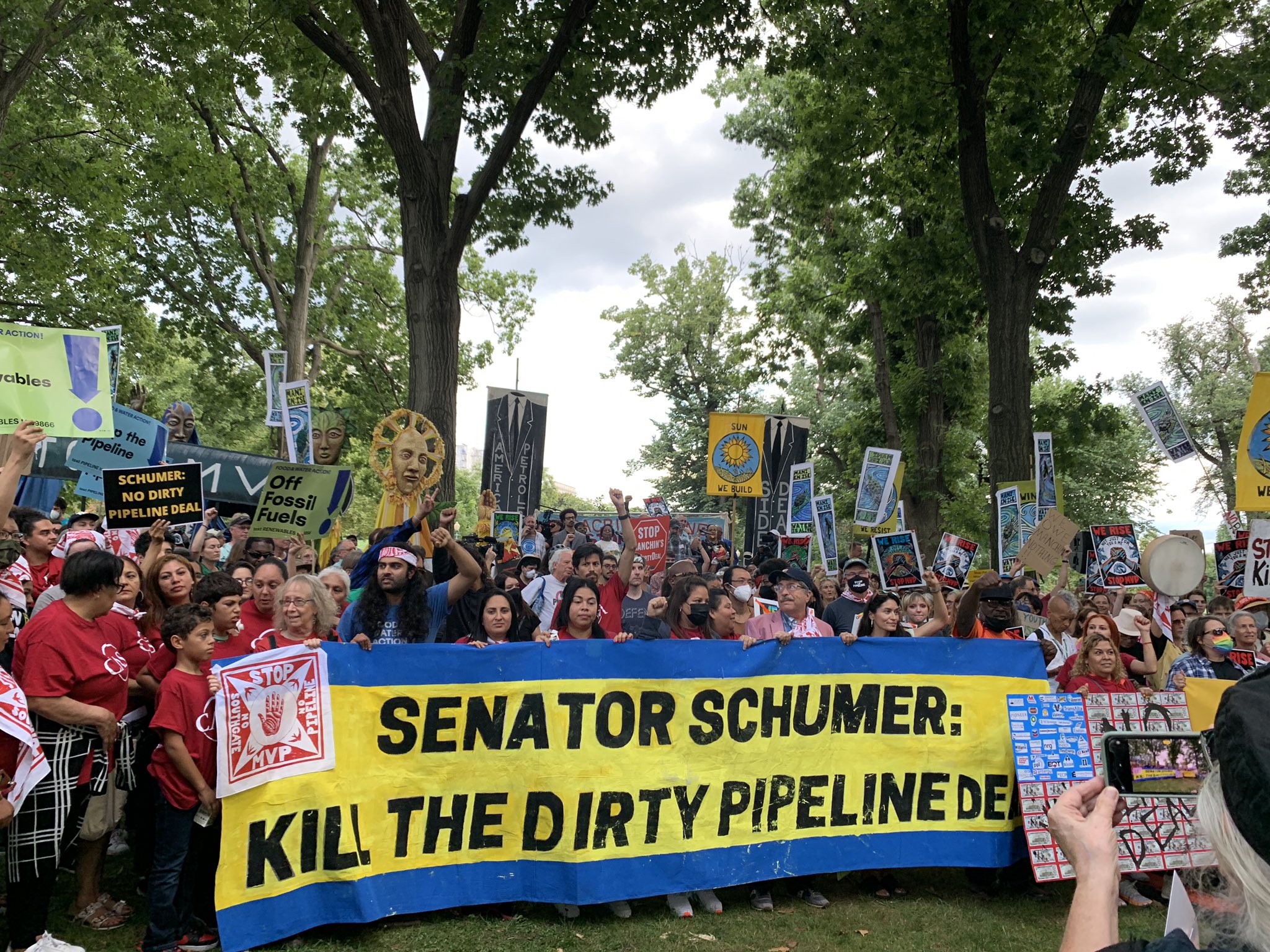 Despite the failure by Senate leaders to pass this proposal as part of the September continuing resolution, Manchin has been floating plans to once again attach it to another piece of must-pass legislation, particularly the National Defense Authorization Act. Text of the defense bill is expected to be released as soon as Monday.

If Speaker Pelosi permits the attachment of the dirty deal to the National Defense Authorization Act, it will be one of her final acts as Speaker and threatens her credibility on climate. It would also come in stark contrast to Pelosi’s recent comments on the death of Rep. Donald McEachin, who devoted many of his final months in a long career of fighting environmental justice to opposing Manchin’s dirty deal.

“This fossil fuel wish list associated with the Inflation Reduction Act side deal, the so-called Energy Independence and Security Act (EISA), is a cruel and direct attack on environmental justice communities and the climate writ large,” the letter reads. “This legislation would truncate and hollow out the environmental review process, weaken Tribal consultations, and make it far harder for frontline communities to have their voices heard… Moreover, we oppose tethering this legislation to any must-pass legislation. It is unacceptable to sacrifice the health, self determination, and prosperity of communities in Appalachia, the Gulf Coast, Alaska, the Midwest, the Southwest, and other frontline communities around the country.”

The massive opposition to the Manchin scheme is a reminder that attempts to spin it as ‘permitting reform’ have been a failure. Last week, Sen. Pat Toomey and Rep. Mike Kelly introduced a pipeline permitting bill that permits the Mountain Valley Pipeline and truncates environmental review under the National Environmental Policy Act (NEPA), Clean Water Act, and Endangered Species Act.

“Manchin’s dirty deal was a disaster when it was proposed this summer, and it’s a disaster now. This bill would be an egregious attack on environmental justice communities and would make a mockery of our commitments to confront the climate crisis. Environmental justice means letting communities who most impacted lead the solutions — and communities fighting the Mountain Valley Pipeline and other projects this reckless legislation would fast-track are united in opposition,” said Collin Rees, United States Program Manager at Oil Change International.

“Once again, the health and dignity of tribal communities across the country are being threatened by the greed of the fossil fuel industry and the elected officials on their payroll. We’re sick of having to fight to defend the basic bedrock environmental laws that allow our voices to be heard, while the climate crisis proliferates. Every lawmaker who is accountable to their constituents, especially those facing the most severe environmental injustices, must do all in their power to block this bill and all future attempts to risk our lives for a profit,” said Dr. Crystal Cavalier-Keck, co-founder of 7 Directions of Service.

“Appalachia is not for the federal government to sacrifice while the United States is applauded for ambitious climate commitments at the COP27 climate talks. For years, the fossil fuel industry and greedy politicians like Senator Manchin have destroyed our communities and homes. We will not allow them to continue to do so with this dirty deal. We stand against this bill and in solidarity with our frontline partners nationwide,” said Russell Chisholm, Mountain Valley Watch Coordinator and frontline Mountain Valley Pipeline organizer.

“Manchin’s dirty deal is just as toxic and dangerous as before. This obvious fossil fuel giveaway would devastate communities and set back efforts to avoid a climate catastrophe. Especially after the administration’s support of phasing down fossil fuels at the global climate conference, President Biden and Congress have to stop pandering to one senator’s climate-killing agenda and reject any attempts to tack this poison pill to must-pass legislation,” said Gaby Sarri-Tobar, Energy Justice Campaigner at the Center for Biological Diversity.

“Senator Manchin failed the first time he tried to sneak through his dirty pipeline deal, and climate and environmental justice leaders are united in opposing any efforts to resurrect this awful deal. Senator Manchin’s proposal serves the interests of the dirty energy companies that have supported his political career. We will continue to oppose any schemes that incentivize fossil fuel expansion, undercut environmental and democratic protections, and sacrifice communities to the interests of corporate polluters,” said Jim Walsh, Policy Director at Food & Water Watch.