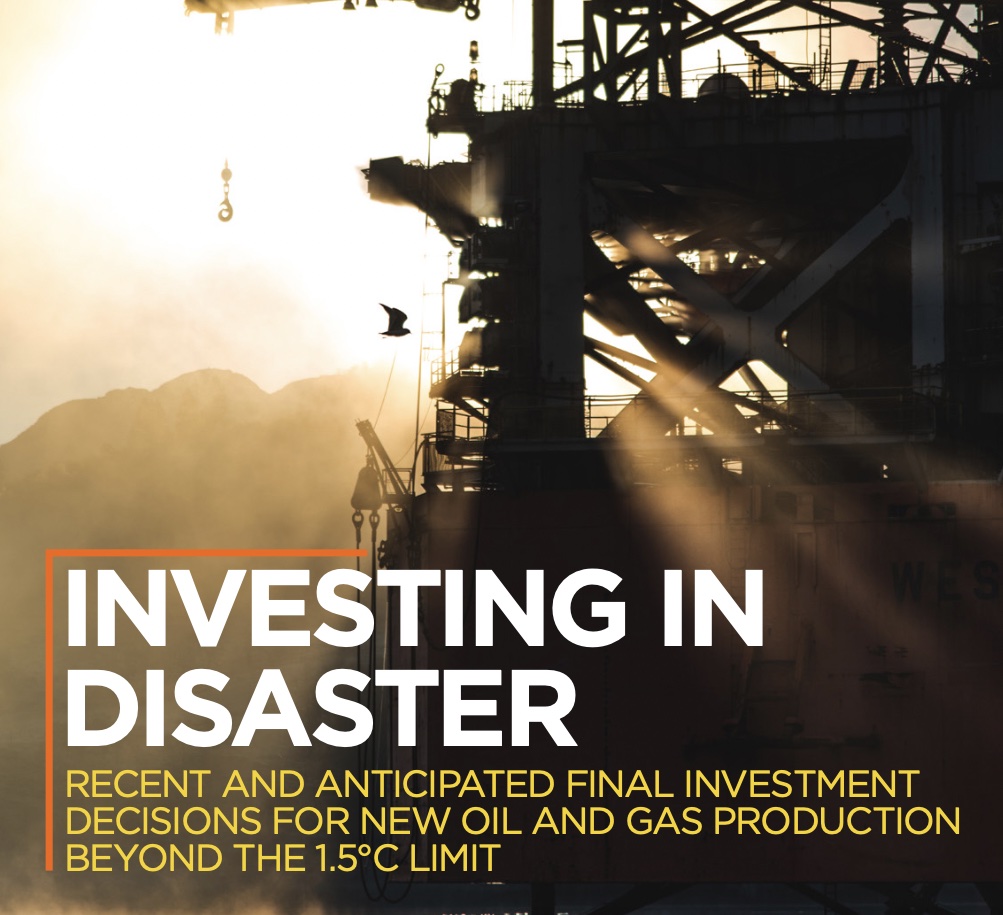 This briefing, “Investing in Disaster: Recent and Anticipated Final Investment Decisions for New Oil And Gas Production Beyond the 1.5°C Limit,” reveals the countries and companies responsible for approving the most new oil and gas extraction in 2022 despite the clear evidence that fossil fuel expansion is incompatible with holding global warming to 1.5°C. It also warns that the oil and gas industry is poised for a disastrous surge of new expansion over the next three years – unless governments and communities put a stop to it.

The briefing reveals that new oil and gas production approved to date in 2022 and at risk of approval over the next three years could cumulatively lock in 70 billion tonnes (Gt) of new carbon pollution. This is equivalent to almost two years’ worth of global carbon emissions from energy at current levels, 17 percent of the world’s remaining 1.5°C carbon budget, or the lifecycle emissions of 468 coal power plants.

Among countries with the most oil and gas expansion approved in 2022, the United States and Saudi Arabia are by themselves responsible for more than 50 percent of the carbon pollution locked in by new oil and gas development approved this year. The U.S. tops the list due to the continued drilling of new fracking wells, particularly in the Permian Basin, while Saudi Arabia ranks second due to Saudi Aramco’s approval of a major expansion of its offshore Zuluf field, the largest conventional oil and gas project approved this year.

Among international oil companies, TotalEnergies is the oil and gas supermajor responsible for approving the most new extraction in 2022, followed by Chevron and Shell. TotalEnergies is in the lead due to its sanctioning of the Tilenga and Kingfisher projects in Uganda, which would feed the controversial East African Crude Oil Pipeline being fought by communities in Uganda and Tanzania.

Governments must step in to stop further expansion and adopt policies that ensure a managed phase-out of fossil fuels alongside a rapid scale-up of just transition support and clean-energy solutions. Specifically, we recommend: