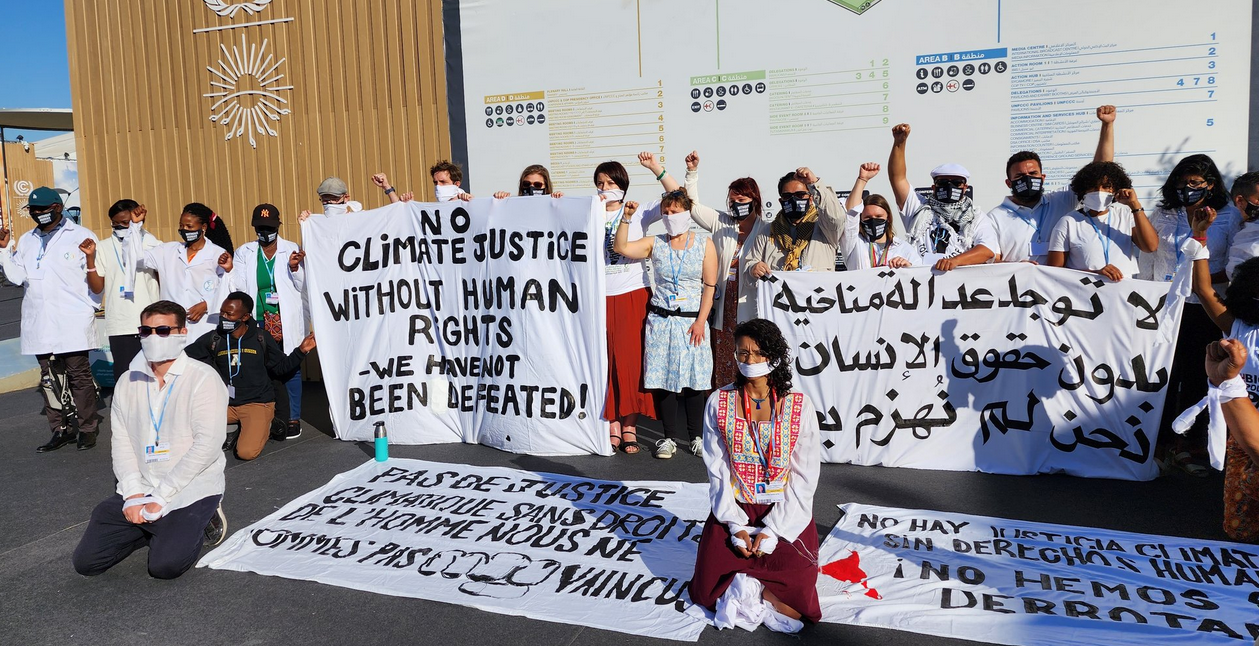 Today marks the twenty seventh anniversary of the murder of Ken Saro-Wiwa and the other members of the Ogoni 9.

They were murdered in 1995 by the Nigerian junta for their peaceful campaign to highlight the ecological destruction and environmental racism of Shell’s operations in Nigeria.

The somber anniversary will be marked by commemorative events in both Nigeria and at the COP27 climate talks in Egypt, happening in Sharm El Sheikh.

Thousands gather tonight at the office of the slain writer and environmentalist Ken Saro-Wiwa in Port Harcourt to keep vigil in his memory. Ken and 8 of his Ogoni kinsmen were killed 27 years ago on Nov. 10, 1995 by the Nigerian government. #RememberSaroWiwa #Ogoni9 pic.twitter.com/m8Z0TtwcAW

Today at the COP, a panel of African experts including my colleague Thuli Makama, and Nigerian activist Nnimmo Bassey will speak at a panel on “Remembering Ken Saro-Wiwa and the martyrs of extractivism.”

Despite the toxic and ongoing legacy of Shell’s operations in Nigeria, and our increasingly climate emergency, the debate on the exploitation of African oil and gas reserves is an active discussion, not only at COP, but across the continent.

Vast areas of the continent are under threat from oil and gas development, even though Africa is one of the most areas threatened by climate change. “While Africa has contributed negligibly to the changing climate, with just about two to three percent of global emissions, it stands out disproportionately as the most vulnerable region in the world”, UNEP has concluded.

And even though Africa is on the frontline of the climate crisis, there is a growing push to lobby for oil and gas extraction on the continent. The COP is literally crawling with fossil fuel lobbyists, with some 636 representatives at the conference, an increase of more than 25% from last year.

But climate activists are fighting back with a message that fossil fuels and especially gas are not the future for Africa. Yesterday, for example, there was an event hosted by the New York Times at the COP, where up for discussion was the motion that “This house believes that…fossil fuel expansion is a prerequisite to a just transition.” Two teams of three debated the motion.

On the “against side” were my colleague Thuli again as well as Mohamed Adow, Founder and Director, Power Shift Africa, and Tzeporah Berman, chair of the Fossil Fuel Non-Proliferation Treaty. The “against side” put forward compelling reasons why fossil fuel drilling can never be part of a just transition.

“Fossil fuels are part of the problem — not the solution. The oil + gas companies that have come to Africa for decades have left us w/ little but death + destruction.”

– @ThuliMakama at #COP27 @nytclimate event on why a just transition means an end to fossil expansion in Africa pic.twitter.com/p0VkroXbNT

We are in the midst of a climate emergency caused by the rich world’s addiction to fossil fuels. There’s no future in #fossilfuels.
The only choice is to ask what energy pathway is right for Africa, and that is a future powered by renewable energy.@mohadow at @nytimes #COP27 pic.twitter.com/sleOiru2Md

Big oil is making record level profits while the rest of us pay at the pump. If these profits were taxed appropriately, we could easily finance a just transition.

As I said at @nytimesevents, taxing the largest oil comps just 10% would free up $37 billion this year alone. pic.twitter.com/FQu17mLowN

There is no doubt, however, that the COP is being held under a backdrop of a dash for gas across vast areas of the continent, threatening land, wildlife, and people.

All the evidence points to the fact that this gas will not lift people out of poverty, but rather enrich the shareholders of western oil companies and even end up as stranded assets, which will further indebt already impoverished nations.

It is also worth remembering that the case of Shell in Nigeria is not an isolated one. Industry-favorable contracts, subsidies, and royalty frameworks, coupled with instances of corruption mean that in the Global South, fossil fuel production has rarely served as a vehicle for just development, energy access, or resource sovereignty.

But despite this, many African Governments seem determined to go for a “dash for gas.” Back in July 2022, the African Union stipulated that the continent would deploy renewable and non-renewable energy, such as gas in the coming years.

The COP is being held just days after an Africa Energy Week event in South Africa, which was entitled: “From Cape to Cairo: A Common African Voice for COP27.” At the Energy Week event, the African Energy Chamber summarized the positions of several influential Africa nations by stating: ‘Drill, baby, drill; gas, baby, gas.’

Speaking by video link, Tarek El Molla, the Egyptian Minister of Petroleum and Mineral Resources, and member of the COP host government, said: “We certainly cannot ignore the fact that oil and gas resources still represent an essential source of energy globally, and will remain part of the global energy mix over the long term.”

El Molla added, “our goal is to provide oil and gas sources in ways that are more responsible, environmentally friendly and with reduced impacts on the climate, including through CCUS [carbon capture use and storage], methane emissions reduction and carbon circular economy.”

Leading experts and activists from the region believe that this narrative is flawed: Professor Mark New, Director of the African Climate and Development Initiative at the University of Cape Town told the Daily Maverick that any gas development will help “push emissions above the cap needed for 1.5 or 2°C of global warming, leading to extra warming, which will then hit African countries hardest, as these are the most vulnerable. It is a case of turkeys voting for Christmas.”

But still African nations plough ahead. A new report released today by Rainforest Foundation UK and Earth Insight warns that the area of land given over to oil and gas extraction in Africa is set to quadruple. This not only threatens internationally important tropical forests and would accelerate climate breakdown but also lead to increased human rights violations.

The region is also home to 150 distinct minority groups, with 35 million people living in designated or proposed oil and gas fields, including hundreds of thousands of Indigenous peoples. Much of this gas, if developed will be exported and not benefit the local communities.

An analysis by Oil Change International last year found that sixty percent of projected production over the next three decades in Africa will be owned by multinational corporations. The vast majority of the gas will be for export.

Indeed, with ironic timing, the day after COP27 started Bloomberg reported that Tanzania was on the verge of signing a huge agreement with oil majors Equinor and Shell for a planned USD 40 billion liquefied natural gas export project. The gas will head to Europe or Asia. It will not be used domestically.

So, despite its continuing toxic legacy in Nigeria and our deepening climate crisis, Shell continues to exploit Africa to enrich its shareholders and imperil us all.

But everyday resistance on the continent to the fossil fuel industry is growing. And today, on the twenty seventh Anniversary of the murders of the Ogoni 9, delegates at COP are remembering all those who have been murdered, tortured, or imprisoned fighting for ecological and climate justice.

Largest, longest and most emotive protest so far at Cop27 in solidarity with the thousands of environmental and human rights defender murdered and jailed, and the silencing of those alive by the Cop process where >630 fossil fuel lobbyists are now walking the corridors. pic.twitter.com/veoOwtZ9sG

OilWatch Africa has also issued a remembrance statement on the Ogoni 9. Nnimmo Bassey, who will be speaking later at the COP with my colleague Thuli on Ken Saro-Wiwa and the others, says simply: “We demand justice for our heroes, a halt to dependence on fossil fuels — the real climate action— and a restoration of all polluted lands and reparation for ecocide.”