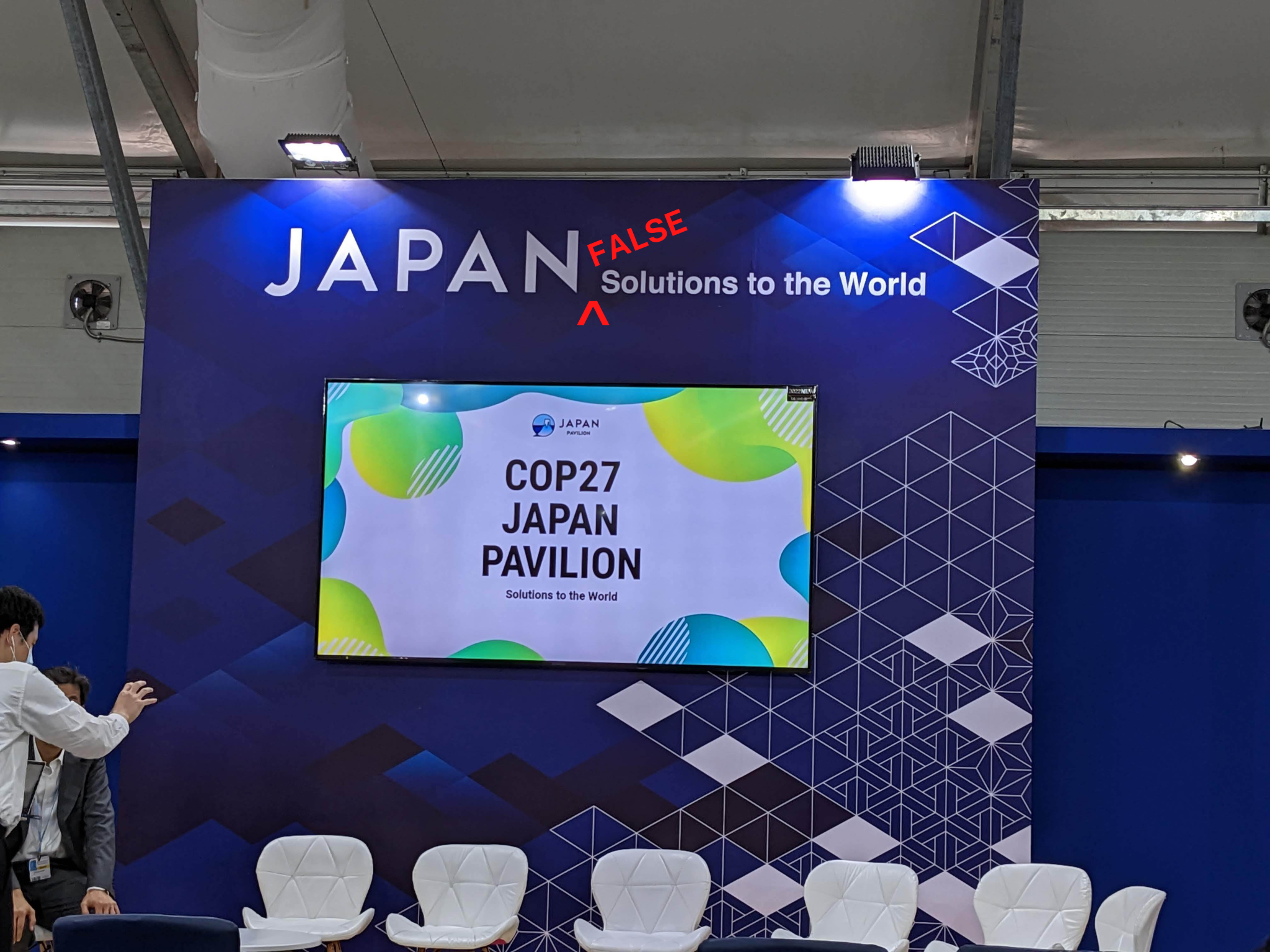 It’s easy to lose touch with reality at the annual UN climate negotiations, also known as COP. The buzz and energy of tens of thousands of people at the UN’s annual conference focused on one of humanity’s greatest crises is overwhelming. And energizing.

Until you realize that you don’t all share the same intent.

Take Japan, for instance. Its sparkling white pavilion at COP is emblazoned with the slogan “Solutions to the Future.” With their technology prowess, it’s tempting to believe the rhetoric that they have the technologies to solve the climate crisis.

But then you shake off the buzz and realize that their line about supporting the “low carbon energy transition” is code for a suite of technologies Japan is promoting that will prolong the use of fossil fuels. The same fossil fuels that have generated the vast majority of the emissions responsible for the climate crisis.

Japan is a marvel at greenwashing.

Japan has been driving the expansion of gas infrastructure across Asia and globally. Mozambique LNG, Batangas in the Philippines, Australia’s Barossa gas field, LNG Canada, LNG projects in Russia and on and on.

On top of that, the Japanese government is promoting other false solutions like the co-firing of ammonia at coal plants, carbon capture and storage and fossil-based hydrogen.

“Japan’s efforts to expand upstream oil and gas and promote false solutions are prolonging the use of fossil fuels and delaying the transition to renewables,” says Makiko Arima, OCI’s Japan Finance Campaigner.

According to the International Energy Agency (IEA), accelerating investment in clean energy and efficiency, not new fossil fuels, is the answer to both the climate and energy security crises. As the second largest LNG importer after China, Japan has invested billions in gas infrastructure for decades and has used Russia’s invasion of Ukraine to justify increased gas finance.

However, the current energy crisis has been aggravated by the war in Ukraine and the slow global transition to clean energy. It has also exposed the financial risks associated with financing gas. The Russian invasion of Ukraine has spiked spot prices for LNG in Asia to record levels, making LNG unaffordable and a barrier to accessing energy for some countries. Bangladesh is saddled with gas infrastructure that they cannot fuel. As a result, the country faces the prospect of rolling blackouts that could continue for three years.

Still, Japan is pushing ahead with support for new gas infrastructure despite opposition from local communities and corresponding project delays.

Projects in Mozambique, the Philippines, and Australia, for example, threaten rich biodiversity, the livelihoods of people reliant on local ecosystems, and communities facing relocation. Affected communities are organizing in opposition to these projects, filing complaints to authorities, and taking those responsible for the projects to court.

“The Mozambique gas industry has created irreversible devastation to the climate, economy, and environment of Mozambique, fueling a war that has created a million refugees and torn thousands of people from their homes, lands and livelihoods. These impacts could not take place without financiers like the Japanese government,” Anabela Lemos, Director, Justiça Ambiental.

In the Philippines, communities and movements have succeeded in stopping roughly half of planned coal projects and at least two LNG projects. “Filipinos need real solutions amid the climate and energy crisis, not more fossil fuels,” said Gerry Arances, Executive Director of Center for Energy, Ecology and Development. “The Japanese government should take note that their international cooperation in the form of false solutions is not welcome in the Philippines.”

Last year, the Japanese Bank for International Cooperation approved a $346 million loan for the Barossa gas field project. “Over the last decade, Australia has grown to become the largest exporter of gas in the world, yet much of this has been on the back of public finance provided by countries like Japan,” said Luke Fletcher, Executive Director of Jubilee Australia. “The Japan Bank for International Cooperation has supported Santos’s extremely dirty Barossa Gas project, despite the fact that proper consent for the project has not been sought or gained from Tiwi Island indigenous communities.”

Fossil-fueled “decarbonization” efforts are a smoke screen for Japan’s hidden agenda: protecting Japanese business interests over people and the planet. If Japan is serious about demonstrating climate leadership and supporting a regional “zero emissions community,” it should immediately end public finance for fossil fuels, as promised at this year’s G7 Summit, and support a just transition to renewable energy.

Shortly after Japan agreed to a G7 commitment to end new public finance for fossil fuels by the end of this year, a Japanese official asserted that Japan will continue to finance upstream oil and gas developments.

To learn more about Japan’s dirty secret, check out our briefing here.