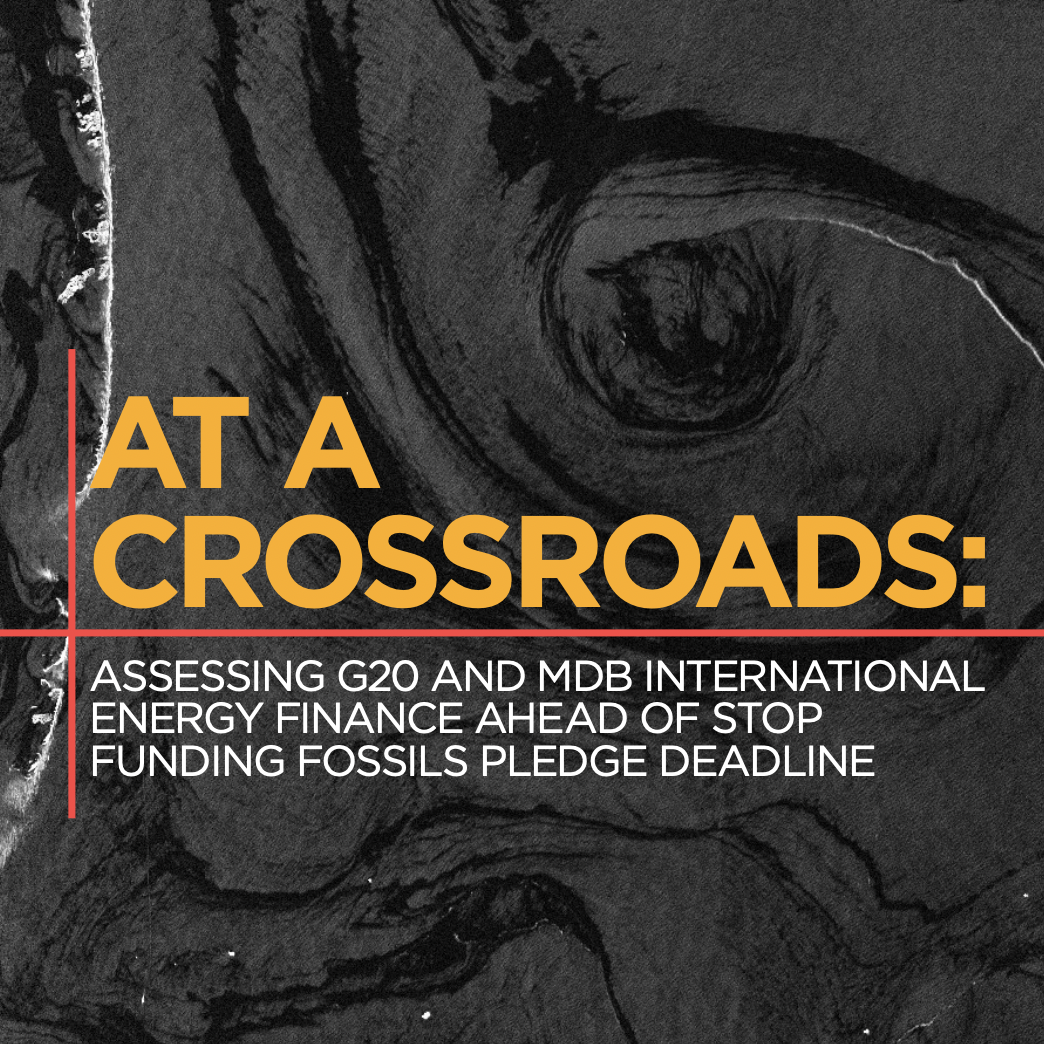 Our new report “At a Crossroads: Assessing G20 and MDB international energy finance ahead of stop funding fossils pledge deadline” looks at G20 country and MDB traceable international public finance for fossil fuels from 2019-2021 and finds they are still backing at least USD 55 billion per year in oil, gas, and coal projects. This is a 35% drop compared to previous years (2016-2018), but still, almost twice the support provided for clean energy, which averaged only $29 billion per year. The research highlights that greatly increased international public finance for clean energy is the solution to the energy crisis, not more fossil investments. If all G20 countries and MDBs shift their fossil support to clean, this would nearly triple clean energy finance to $85 billion.

The report analyzes finance from OCI’s open-access database, Public Finance for Energy Database (energyfinance.org), which has been updated alongside the release of this report. It tracks financial flows to fossil fuels and clean energy from G20 bilateral development finance institutions (DFIs), export finance agencies (ECAs), and the multilateral development banks (MDBs).

From 2019 to 2021, G20 countries and the major multilateral development banks (MDBs) provided at least USD 55 billion per year in international public finance for oil, gas, and coal. This fossil fuel finance was almost two times more than their support for clean energy, which averaged only $29 billion per year.

This support directly counters G20 countries’ commitment to align financial flows to 1.5 degrees Celsius (°C) under the Paris Agreement, as well as their 2009 commitment to phase out fossil fuel subsidies. This international public finance has an outsized impact on global energy systems, because it can offer government-backed credit ratings, is often provided at below-market rates, comes with large research and technical capacity, and signals broader government priorities. All of this helps make a project a less risky and more attractive investment. Right now, G20 countries and MDBs are overwhelmingly using their international public finance to prop up fossil fuel companies and prolong the fossil fuel era.

However, there is some new momentum to reverse these flows and use international public finance institutions to instead support a globally just energy transition. Following a wave of commitments to bar international coal finance that began in 2013, 34 countries and 5 institutions signed a joint commitment in 2021 to restrict support for oil and gas as well. The Statement on International Public Support for the Clean Energy Transition (hereafter “Glasgow Public Finance Statement”), is a joint commitment made at the 26th UN Climate Change Conference of the Parties (COP26) in November 2021 to end direct international public finance support for fossil fuels by the end of 2022 and instead prioritize public finance for clean energy. The signatories of this commitment include some of the largest historic providers of international public finance for fossil fuels, including G20 members Canada, Germany, Italy, the United States, and France. If all signatories follow through on their commitment, this would shift at least $28 billion a year out of fossil fuels and into clean energy, which would help shift even larger sums of public and private money. Much greater financial flows from high-income countries to lower-income countries are urgently needed for clean energy as well as debt cancellation, climate finance, and loss and damage compensation to ensure a globally just energy transition. Still, the Glasgow Statement represents a potentially transformative starting point.

Using Oil Change International’s Public Finance for Energy Database (with all data available at energyfinance.org), this briefing adds new figures for 2021, building on past reports Talk is Cheap, Still Digging, and Past Last Call, which covered trends from 2013 to 2020. We cover the energy project finance of G20 export credit agencies (ECAs), G20 development finance institutions (DFIs), and the major multilateral development banks (MDBs). It is important to note these figures are underestimated due to large gaps in public reporting. We aim to capture indirect fossil fuel support through financial intermediation and policy-based lending throughout, but these flows are especially opaque and so they are particularly underreported.

Our analysis shows that:

As part of doing their fair share to limit warming to 1.5°C and ensure a livable future, G20 governments and the MDBs they control must: