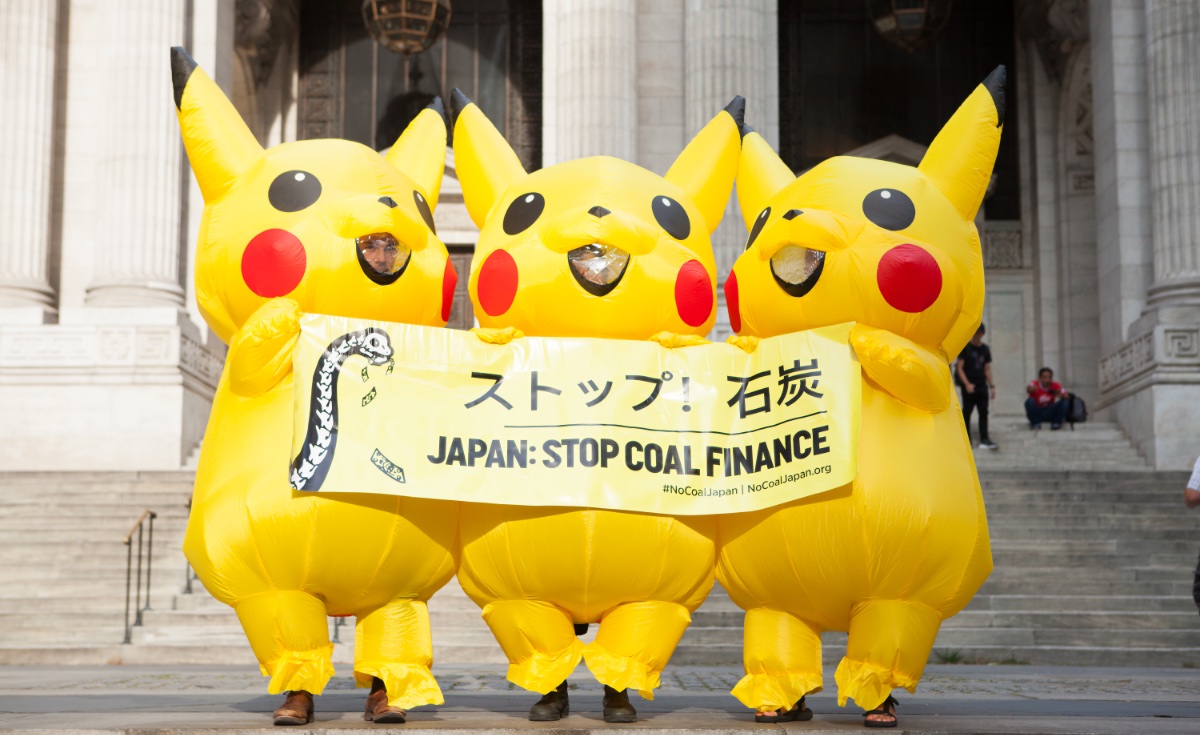 The Japanese government, one of the world’s largest funders of fossil fuels, is currently organizing “GX Week” in Tokyo to promote “Green Transformation.”

The purpose of the event is to accelerate the “transition” from fossil fuels in order to tackle climate change.

Ministers and world leaders have been invited to Japan to support the “Green Transformation” to help “shift the economic, social, and industrial structures that have depended on fossil fuels since the Industrial Revolution, to structures driven by clean energy, and drive economic growth and development through emissions mitigation.”

On the very surface, hosting the conference could be seen as a positive move by the Japanese government, which has long been criticised for its stance on developing fossil fuel projects at home and abroad.

Between 2018 and 2020, Japan provided at least $10.9 billion a year to oil, gas and coal projects. This government-backed financing of fossil fuels through public financial institutions abroad was more than eight times larger than Japan’s international assistance for renewable energy, which averaged $1.3 billion per year. From 2012 to 2020, Japan was the largest lender for fossil fuels.

However, the proposals being put forward by organizers at Japan’s Ministry of Economy, Trade and Industry are a host of false solutions that rather than solve climate change, will continue our dependence on fossil fuels and exacerbate the problem. These include fossil-based blue hydrogen, ammonia at thermal power plants, Carbon Capture and Storage (CCS), gas and LNG.

This is not just a problem for Japan but the wider region because Japan’s influence and fossil fuel finance spreads far beyond its borders. In Indonesia, for example, Japan is supporting hydrogen, ammonia fuel, and CCS/CCUS in order to achieve “realistic energy transitions”, according to the Memorandum of Cooperation signed by both governments early this year.

Fanny Tri Jambore of WALHI (The Indonesian Forum for the Environment) says, “The real agenda behind this is to increase corporate control over the energy market. Japanese investment that still encourages the use of fossil fuels, like using ammonia at the Suralaya Power Plant in Banten, is another example of 21st century colonialism under the guise of energy transition. Indonesia is currently facing an oversupply of electricity which provides a huge opportunity to stop using fossil fuels and start increasing renewable energy-based power generation.”

In Bangladesh, the Japan International Cooperation Agency is currently providing technical assistance to the Government of Bangladesh to introduce large-scale thermal and gas-fired power generation using mixed combustion of hydrogen and ammonia.

“The Japanese government is pushing Asian governments to expand gas, delaying the phase-out of fossil fuels in Asia,” says Hiroki Osada of FoE Japan. “We are also witnessing that Japanese-funded gas projects, such as in the Philippines, have been destroying rich marine ecosystems, on which local fishing communities have depended for their livelihoods.”

Osada adds: “As a result, many fisher folks are suffering to make their living. The government of Japan must listen to the voices of communities in Asia that oppose Japan’s support for gas expansion and take actions based on the needs of local communities.”

To coincide with the conference, a network of civil society groups from across the region and Global South have come together to call for Japan to stop financing false solutions and delaying the just transition to clean energy. Civil society groups in Japan, India, Indonesia, Bangladesh, and the Philippines took action on the opening day of GX Week to protest against the Japanese government’s imposition of “false solutions.”

They are calling on the Japanese Government to “stop forcing superficial measures against climate change to Asia and other countries and instead to provide assistance that is consistent with the goals of the Paris Agreement, sustainable and based on communities’ needs.”

“Every year we move closer to climate collapse, yet the Japanese government and Japanese corporations are proudly showcasing false solutions to the climate crisis,” says Lidy Nacpil of the Asian Peoples Movement on Debt and Development. “These are not “solutions” the world needs. In fact, these so-called solutions prolong fossil-fuel use and in some cases even exacerbate emissions. This conference is an attempt to delay the rapid, equitable and just energy transition the world urgently needs.”