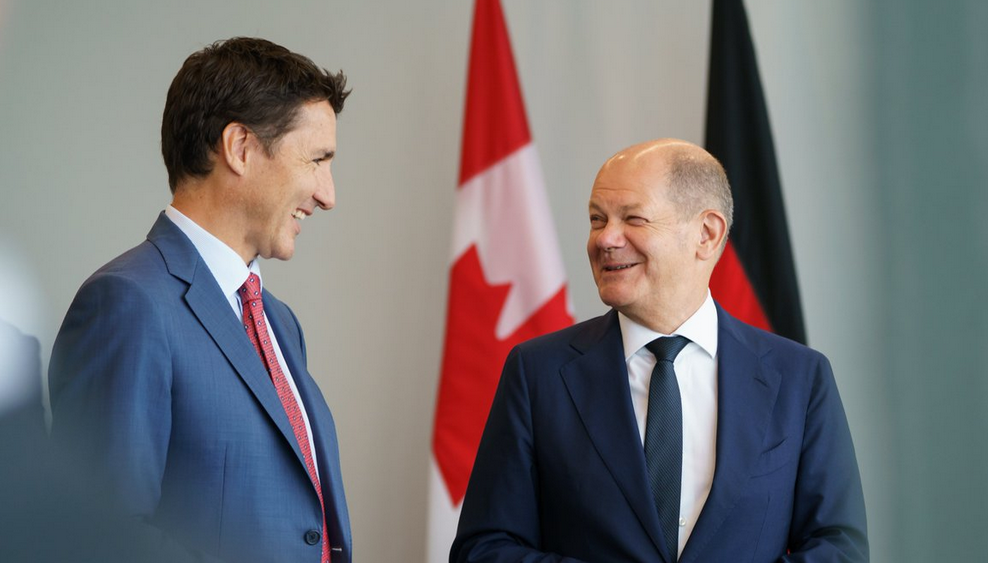 As the Chancellor of Germany, Olaf Scholz, departs Canada after his first official visit to the country, there are concerns that the Canadian gas industry is trying to exploit the Ukraine war to sell LNG European countries, including Germany.

Scholz was in Canada to “further strengthen” the close partnership between the two countries. Amongst a whistle stop tour that included Montréal, Quebec, Toronto, and Ontario, the two leaders talked about numerous issues, including “bilateral cooperation on energy” and climate change.

An official communique from Trudeau’s Government about the visit outlined how “As Russia continues to weaponize energy, Canada is also working with its European and global partners, including Germany, to strengthen energy security and accelerate the clean energy transition.”

But civil society groups are concerned that under the guise of “energy security”, the Canadian government will fast-track liquified natural gas expansion to Europe, under pressure from the country’s oil and gas industry. The US shale industry has already exploited the Ukraine war to push its exports and now the Canadians might be planning to do the same. Already in the first half of this year we have seen LNG imports to EU and UK increase by 63%. And now it could be Canada’s turn.

To highlight the climate and economic risks of Canada setting up an LNG industry to supply Europe, many of the country’s civil society groups have launched a new website, and the International Institute for Sustainable Development (IISD) has just published a damning new report.

Called stopthegas.ca, the website warns how “The gas industry is dressing up plans for expansion on Canada’s East Coast in the guise of ‘helping’ Europe wean itself off Russian gas.”

The report by IISD, entitled, “Why Canadian Liquefied Natural Gas Is Not the Answer for the European Union’s Short-Term Energy Needs”, outlines why this would be a catastrophic mistake. Aside from grave climate and Indigenous rights violations the country’s LNG industry and infrastructure cannot even be scaled up in time to meet Europe’s needs.

The report argues: “Canada has no ready liquefied natural gas export infrastructure, and it will take at least 3 years before new projects come online. Canada cannot ramp up supply before 2025, while Europe’s energy needs will largely be resolved by that time. High prices and energy security concerns, combined with climate commitments, suggest that new Canadian liquefied natural gas infrastructure would be at risk of becoming stranded.”

For now, it is unclear whether the Canada will expand its LNG industry to export gas to Europe, a victory that climate organizers are rightly celebrating. One report from CBC from Monday’s press conference between the two leaders noted how “Justin Trudeau and his German counterpart, Chancellor Olaf Scholz, appeared to pour cold water on the idea of shipping Canadian natural gas to Europe when asked about the proposal.” But it went on to add both leaders had “not ruled out a role for Canadian natural gas in alleviating Europe’s energy shortage.” Most attention landed instead on a separate hydrogen deal that Trudeau and Scholz did move forward on — a “joint declaration of intent” to develop wind-generated hydrogen.