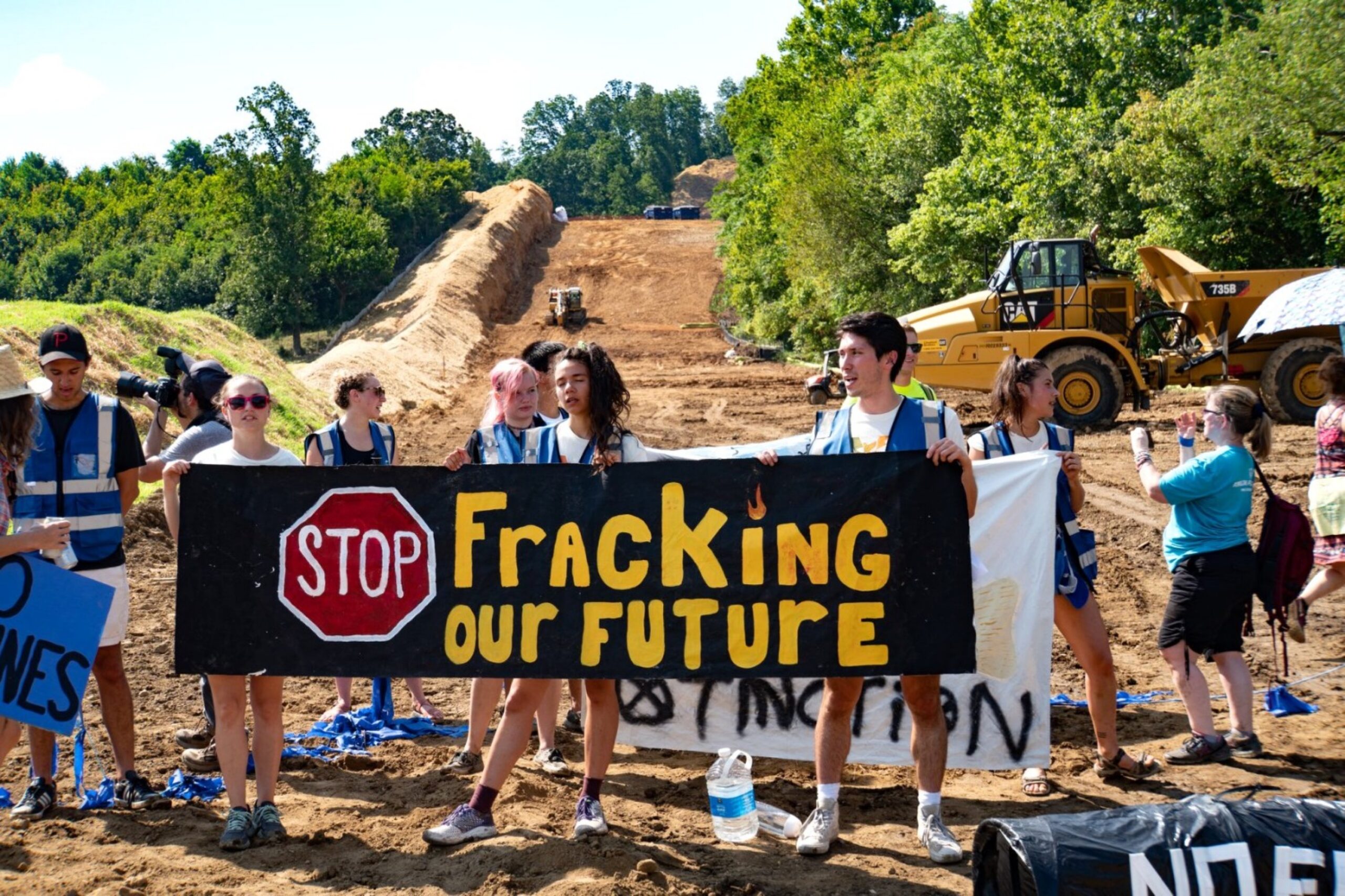 According to a leaked draft, the proposed dirty infrastructure bill would fast-track fossil fuel projects like the Mountain Valley Pipeline, and undercut basic environmental protections.

“This fossil fuel wish list is a cruel and direct attack on environmental justice communities and the climate,” the group’s letter said. “This legislation would truncate and hollow-out the environmental review process, weaken Tribal consultations, and make it far harder for frontline communities to have their voices heard by gutting bedrock protections in the National Environmental Policy Act and Clean Water Act.”

The proposal also requires the president to create a list of at least 25 projects deemed to be of “strategic national importance”; at least five of the priority items “shall be projects to produce, process, transport, or store fossil fuel products, or biofuels, including projects to export or import those products.” The United States must reject new fossil fuel projects to meet President Biden’s emissions reduction goals and comply with what science says is necessary to keep warming below 1.5 degrees Celsius.

The Mountain Valley Pipeline alone would lead to annual emissions equivalent to over 89 million metric tons of carbon dioxide, according to analysis by Oil Change International. This is equal to the emissions from 26 coal plants or 19 million passenger vehicles per year.

“Prolonging the fossil fuel era perpetuates environmental racism, is wildly out of step with climate science, and hamstrings our nation’s ability to avert a climate disaster,” the letter highlights. “Supporting this legislation would represent a profound betrayal of frontline communities and constituents across the country who have called on you to prevent the multitude of harms of fossil fuels and advance a just, renewable energy future.”

Reports indicate that Congressional leadership plan to introduce the legislation in September with the hope of a final vote before the end of the month. But some Democratic leaders, including House Natural Resources Committee Chair Rep. Raul Grijalva, have spoken out against the deal and called for it not to be included in the federal spending resolution, which also must pass before the end of September.

“Appalachia is home to many people, but more specifically, the home of my ancestors of the Occaneechee, Monacan and Saponi and many other Indigenous peoples. This is a dirty deal made at the expense of us,” said Dr. Crystal Cavalier of 7 Directions of Service. “It is an erasure of my people and ancestors again, with no regard for the water, nature and people. We refuse to be a sacrifice.”

“Here in Appalachia, on the frontline of the Mountain Valley Pipeline, we refuse to be sacrificed for Senator Manchin’s political gain and to prop up the dying fossil fuel industry,” said Russell Chisholm, Mountain Valley Watch Coordinator. “We stand in solidarity with all frontlines to say ‘no’ to this dirty deal that puts our communities in more danger.”

“The so-called ‘permitting reform’ deal is nothing but a deadly fossil fuel industry wishlist,” said Collin Rees, United States Program Manager at Oil Change International. “The Mountain Valley Pipeline is a fracked gas disaster that won’t be built, and we won’t allow Joe Manchin and Chuck Schumer to attack environmental justice communities by removing some of their only tools to oppose destructive projects. Congress must kill this dangerous bill immediately and empower frontline communities to confront the climate crisis.”

“In Michigan, no matter our race or zip code, we all want clean and healthy neighborhoods where our families can thrive. But Senators Manchin and Schumer, and the American Petroleum Institute are threatening our rights to clean air and clean water with their ‘side-deal,'” said Juan Jhong-Chung, Climate Justice Director at Michigan Environmental Justice Coalition. “This bill would fast track toxic projects in Black, Brown, Indigenous and poor communities. We should not be forced to host more oil pipelines or dirty infrastructure for false solutions like carbon capture, hydrogen, and nuclear power. We demand that our elected officials stop sacrificing our people for the financial gain of polluters.”

“I have more than five years of experience in the solar industry and I am passionate about helping people reduce their reliance on fossil fuels. People’s lives will change as our world embraces renewables. That is my dream. I am grateful I discovered a passion and purpose in life so our future children may live in a clean and green world,” said Serina Morena, a member of the Green Workers Alliance. “Taking away environmental reviews of pipelines and other fossil fuels projects is a terrible idea. Instead we need more renewable energy and the jobs they create.”

“It’s atrocious that Congress is even considering dismantling bedrock environmental protections just to please one senator,” said Brett Hartl, government affairs director at the Center for Biological Diversity. “Democrats must expose this measure for what it is — a total giveaway to the fossil fuel industry. This backroom deal would sacrifice frontline communities, ensure decades’ more toxic extraction and turn up the fossil-fueled broiler that’s heating the whole planet. This poisonous plan must be stopped.”

“The proposal from Senator Manchin is nothing more than a wish list from Big Oil, whose only goal is more profit at the expense of people and the planet,” said Thomas Meyer, national organizing manager at Food & Water Watch. “Members of Congress who fought for clean energy incentives in the Inflation Reduction Act must now speak up strongly and swiftly against this massive rollback of public health and environmental protections that will fast track fossil fuel projects.”

“This dirty side deal is nothing short of a wholesale giveaway to the fossil fuel industry to the detriment of frontline communities, Tribal nations, and Mother Earth,” said Joye Braun, National Pipelines Organizer of the Indigenous Environmental Network. “The world is on fire and negotiating the amount of fuel for those flames is not acceptable. Congress needs to understand that there is no compromise when it comes to protecting the next seven generations of life and beyond.”