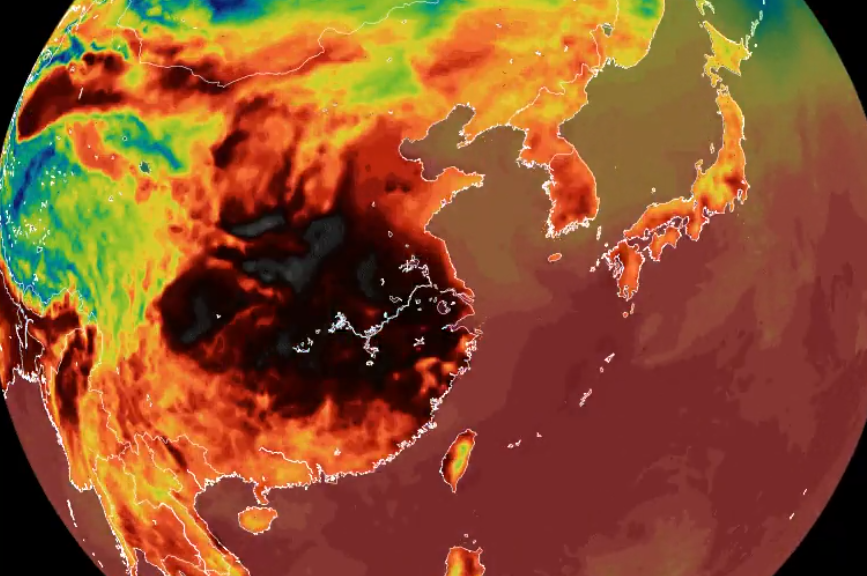 In a year when climate records – from floods, fire, and drought – are being shattered daily like shards of glass, there is one country that bests them all: China. The country is experiencing a heatwave like no other.

It has lasted over seventy days, with record breaking temperatures at day and at night.

Over 100 million people are affected in an area covering 500,000 square miles of the country, experiencing record temperatures exceeding 104°F (40°C). To put this into perspective, this is equivalent to the size of Texas, Colorado and California combined.

Experts are calling it the “worst heatwave ever recorded in global history,” or “Worst heat wave known in world climatic history.”

China is experiencing the worst heatwave ever recorded in global history.

The combined intensity, duration, scale, and impact of this heatwave is unlike anything humans have ever recorded.

Over 260 locations have seen their hottest days ever during this 70+ day heatwave. pic.twitter.com/TCKvR37Em3

Endless record heat in China yesterday with 52 more records plus 13 more monthly records (See list below). Some stations have broken their records dozens of times in the past weeks with margins of several degrees in some cases.Worst heat wave known in world climatic history. https://t.co/T6WggBNURn

They are not alone in outlining the enormity of what is happening in China right now. According to Axios, this extreme event which is baking southern China “has no parallel in modern record-keeping in China, or elsewhere around the world for that matter.”

Meteorologist Bob Henson, a contributor to Yale Climate Connections, told Axios: “I can’t think of anything comparable to China’s heat wave of summer 2022 in its blend of intensity, duration, geographic extent and number of people affected.”

Intensity, impact, scale and duration of #China's heatwave this summer has broken all records
It lasted 64 days (as of Aug. 15), with record incidence of temperatures above 40°C. The heat continues
??China Meteorological Administration at https://t.co/9Gkj4RFkMM#StateofClimate pic.twitter.com/FMcA45ieqS

Some parts of the country have been experiencing temperatures of 110.3°F (43.5°C), shattering previous temperature records. Last weekend, Chongqing, a city of 9 million, recorded an overnight low temperature of 94.8°F (34.9°F), another record.

Once great mighty rivers, such as the Yangtze – the world’s third largest river which provides drinking water to 400 million people – they are reduced to shadows of their former selves. Shipping routes on some parts of the river are closed, with levels over fifty percent lower than average over the last five years. Others rivers are reduced to trickles and pools.

Analysts like Jefferies say that with a backdrop of COVID-19 still affecting the country, the record two-month-long heatwave amounted to a “black swan event” for China. “The drought has created a vicious spiral as hydroelectric power becomes scarce which in turn cuts electricity production for industry,” says Jefferies.

And the drought has forced the country to cut back on hydropower, leading to blackouts and power shortages. In Sichuan, which gets more than eighty percent of its power from hydro, the region is said to be in a “grave situation,” where the authorities have now issued a severe “level 1” emergency incident.

As the country’s leaders stepped up efforts to respond to the heat, China issued a formal nationwide drought alert last Friday. Many areas are now without drinking water, with the authorities increasingly having to truck in water or generators to people without water or power.

The drought, which is expected to last well into next month, could affect the country’s rice harvest, which is due to happen in the next ten days. The authorities are busy digging new irrigation channels as lake levels are so low, old ones do not work.

And now the authorities in China are so desperate they are trying to induce rainfall in parts of central and southwest of the country, by “cloud seeding”, which is a form of weather modification that involves spraying chemicals on to clouds in the hope that will induce rain.

One way to stop the drought is to stop drilling for oil and gas. Because the experts are in no doubt that this is climate change in action:

This is climate change. The worst heatwave in China in 60 years is ongoing.