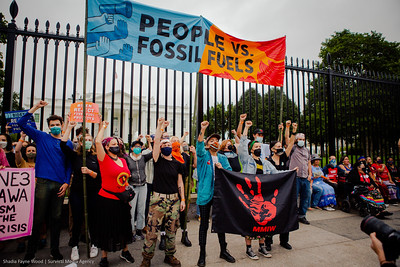 WASHINGTON, DC — In response to the House passage of the Inflation Reduction Act (IRA) earlier today, People vs. Fossil Fuels, a national coalition of over 1,200 organizations from all 50 states, issued a joint statement denouncing the fossil fuel handouts included in the Inflation Reduction Act (IRA), as well as the legislation proposed by Senator Manchin to expedite permitting and approvals of fossil fuel projects:

“The passage of the Inflation Reduction Act has come at a tremendously high price that will be disproportionately paid by Black, Indigenous, family farming, people of the global majority and working-class communities. With fires and flooding taking a toll on families around the country, we simply cannot afford additional giveaways to the fossil fuel industry in a deal that Democratic Leaders negotiated with Senator Manchin.

“Investments in renewable energy, which are the result of years of organizing by communities most impacted by fossil fuel pollution and the climate crisis, cannot alone prevent climate chaos without simultaneously ending the era of fossil fuels. Yet Congress is poised to push through devastating permitting reforms that shorten review of toxic carbon, oil and gas projects and approve dozens of massive fossil fuel infrastructure projects like the Mountain Valley Pipeline.

“We will not allow our relatives in Appalachia, the Gulf Coast, Alaska, the Midwest and Southwest, along with other frontline communities to be sacrificed at the altar of corporate greed. We strongly oppose the legislation proposed by Senator Manchin, and will continue to fight for the clean air, water, and future that every community deserves. As Congress has failed to pass meaningful climate legislation, it’s more important than ever that President Biden use every tool at his disposal, including declaring a climate emergency, to stop the expansion of fossil fuels.”

Interviews with members of Appalachia, Gulf Coast, Alaska, Midwest, Southwest, and other frontline communities that are being offered up as sacrifice zones are available.

Made up of local, regional, and national organizations, People vs. Fossil Fuels helped organize distributed actions in over 19 cities across the U.S. earlier this month. The actions urged President Biden to address the out of control fossil fuel industry destroying our communities by declaring a national climate emergency, taking executive action, and rejecting permits for fossil fuel projects. The coalition is also calling for Senator Schumer to kill the permitting reform deal. The deal, which was labeled “Draft – API”, is another attempt by the fossil fuel industry to fast track dangerous and polluting projects with no regard for the health and safety of frontline communities.