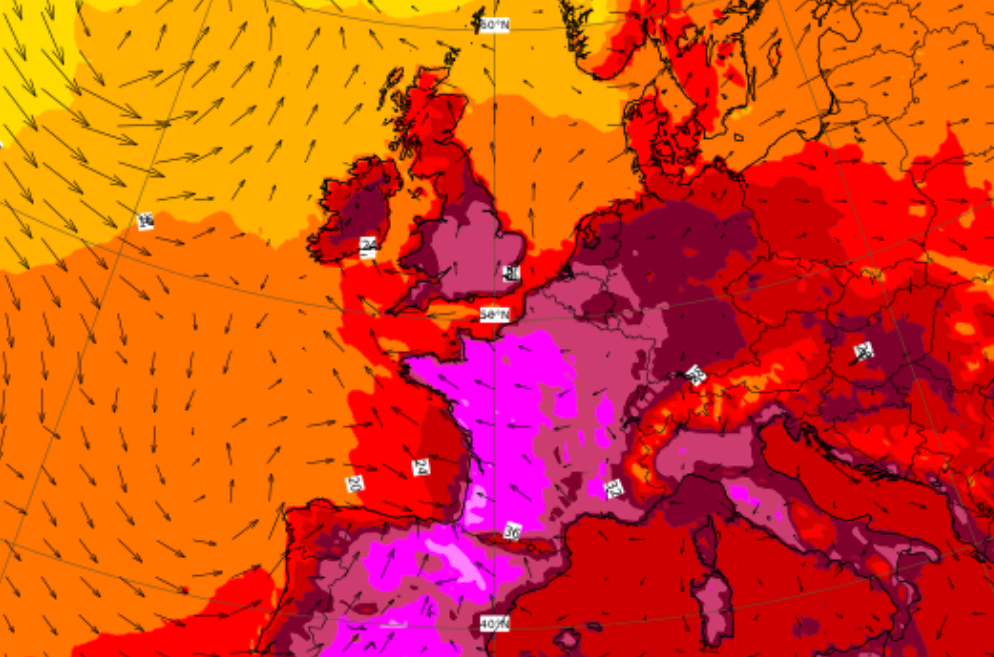 As I write, the UK has just experienced its hottest ever night. It has also just smashed the record for the hottest day ever.

The UK’s Met Office, which for the first time ever issued a “red” alert for heat, just tweeted:

?? For the first time ever, 40 Celsius has provisionally been exceeded in the UK

? Temperatures are still climbing in many places, so remember to stay #WeatherAware ??#heatwave #heatwave2022 pic.twitter.com/GLxcR6gjZX

The 40 degree mark is a landmark temperature that scientists have long predicted, but thought would not break until well into the future.

As the Washington Post commented today, “hitting 40C, for British climate scientists, is a kind of a unicorn event that had appeared in their models but until recently seemed almost unbelievable and unattainable this soon.”  Similar sentiments were pointed out by experts on Twitter:

In 2020, the @metoffice produced a hypothetical weather forecast for 23 July 2050 based on UK climate projections.

Today, the forecast for Tuesday is shockingly almost identical for large parts of the country. pic.twitter.com/U5hQhZwoTi

Temperature records are falling everywhere. The UK is not alone. Large swathes of Europe are scorching too. Large parts are on fire. Yesterday, France saw over 100 hundreds of records broken, with highest ever temperatures recorded.

Nearly 100 all-time records fell in France ?? today according to @extremetemps.

Heavy concentration of records fell in the west where 15 departments sat under red heat warning. pic.twitter.com/V163rX4BVR

In Western France, meteorologists have warned of a “heat apocalypse.” Some 25,000 people have been forced to flee their homes or holiday cottages to escape wildfires that are raging, west of Bordeaux. “We’re climate change refugees,” a local resident, told Le Monde after fleeing his home.

Hundreds of people have already died in the heat. Some 14,000 of beautiful pine forest near the Dune du Pilat, Europe’s highest sand dune and a tourism hotspot have been destroyed. Temperatures were said to have reached 44°C. “In 30 years of firefighting I have never seen a fire like this,” one firefighter warned.

In Spain, thousands have fled the raging fires in the in the Mijas hills, which are close to the city of Málaga. Some one hundred and fifty people were said to have died from the heat on Saturday alone.

During a visit to one of the affected regions yesterday, Spain’s Prime Minister Pedro Sánchez blamed climate change for the fires. “I want to make something very clear,” he said. “Climate change kills: it kills people, as we’ve seen; it also kills our ecosystem, our biodiversity, and it also destroys the things we as a society hold dear – our houses, our businesses, our livestock.”

In neighboring Portugal, where temperatures hit 45°C last week, some 15,000 hectares of land have been destroyed. In Greece and Spain, wildfires rage too. Northern Spain saw temperatures of 43°C (109°F) yesterday.

And as the air moves north, it is not just the UK that is suffering, Belgium is expected to see temperatures of 40°C, with Germany and the Netherlands sweltering too.

In Germany, a report on the costs of climate change was published by the Government. It calculated the costs of drought, floods, and extreme heat had cost the country a staggering EUR 145 billion from 2000 to 2001. Climate change had cost Germany at least Euros 80 billion had been since 2018. The country’s s Environment Minister, Steffi Lemke, called the data “horrifying” which showed the “enormous damage” of the climate crisis.

The scorching temperatures in Europe are making headlines not only on the continent but also in the U.S., where it made the front page of the New York Times and Washington Post today:

But of course, it is not just Europe. Large parts of the U.S. are baking and so too is Asia. The western media, which might finally be waking up to the grim reality of climate change, is finally covering the issue. But climate activists rightly point out that the scorching heat in Asia gets little attention in the media.

And climate scientists, while welcoming the media’s increasing coverage of the issue, note that politicians are still pouring billions into exploring for more oil and gas.

It's so, so good that climate urgency is finally going mainstream, though heartbreaking that it took this level of heat. Meanwhile world leaders are still idiotically prioritizing fossil fuel expansion and doing less than nothing to stop Earth breakdown. Keep pushing!

Indeed, while the U.K. is baking, the country is in the middle of a race to select the next Conservative leader and Prime Minister. The candidates have been accused of having, at best, a cosmetic approach to climate change, and at worse a hostile one. The Conservatives remain largely in denial about the scale of our climate crisis.

Until politicians start prioritizing a just transition and stop backing the fossil fuel industry, temperatures are going to carry on rising.

BREAKING: We won our case against the UK gov's inadequate net zero strategy!

On the hottest day on record in the UK, the High Court has ruled that the government’s Net Zero Strategy breaches the Climate Change Act.

This is a landmark victory.