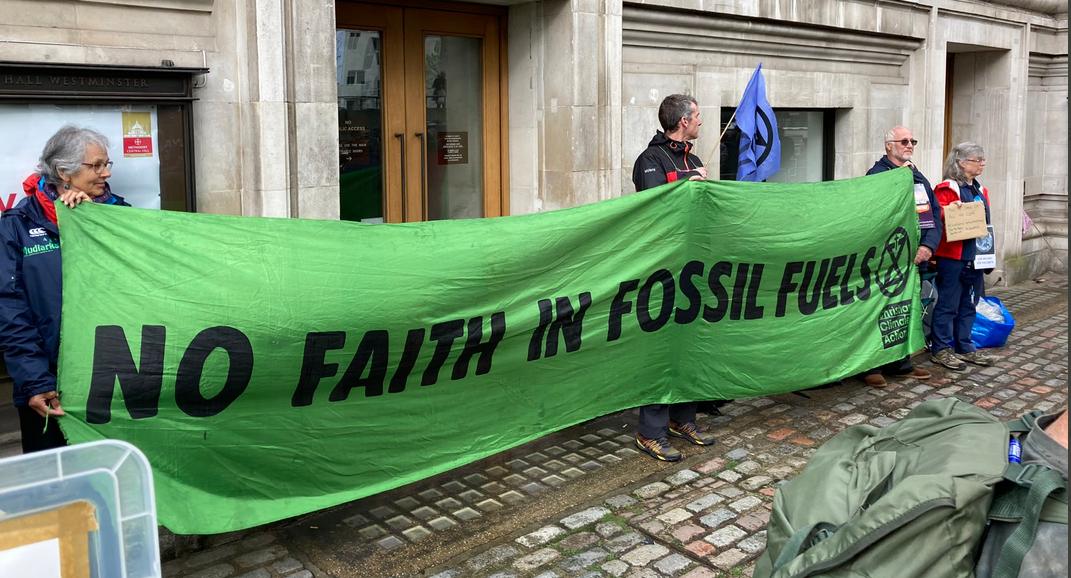 Today is Shell’s AGM, where the company will try and spin to its shareholders and the wider public that it is leading the climate fight and race to net zero. But it’s all a climate charade. It’s all a lie.

As I write, protestors are outside Shell’s AGM pointing out the company’s hypocrisy on climate change. Others are highlighting that despite losing a court case in the Hague forcing it to act on climate, Shell is now challenging that judgement. Shell does not like others telling it how to act, even if it means saving lives.

“How can these people have the audacity to walk down there while there’s so many people standing here who are just genuinely terrified?”

But we know Shell is a climate hypocrite. Shell knows this but it still spins and weaves like it has done for decades as it has obfuscated the truth over climate and avoided responsibility for its actions in places like Nigeria.

The report is an update from an inaugural 2020 study which analyzed the latest climate pledges of Shell and the other leading oil companies against 10 minimum benchmarks for alignment with the 1.5°C temperature goal outlined in the Paris Agreement.

Today’s report reveals that Shell and the others are involved in over 200 expansion projects on track for approval from 2022 through 2025 — equivalent to the lifetime emissions of 77 new coal power plants.

Ahead of @Shell’s Annual General Meeting on May 24, shareholders will vote on resolutions around the company’s climate strategy. Make no mistake, @Shell’s “climate strategy” is largely hot air, failing to align with what’s needed for 1.5ºC. pic.twitter.com/w20XDk0SgA

Inside the AGM, the company – just like the other majors – will face shareholder pressure to take much stronger action on climate. The comapny also faced activists singing “we will, we will stop you”.

HAPPENING NOW: I’m at @Shell_UKLtd AGM where a choir has disrupted the chairman’s speech singing a rendition of “we will stop you” ? #RallyAgainstShell pic.twitter.com/JlYDT3ChF6

Also at the AGM, the Dutch investor action group, Follow This, has filed a motion – that is calling on Shell to pledge to more stringent short, medium and long-term emissions targets. The motion is likely to be voted down by investors who maintain a profit-first mentality.

I am sure there are hundreds of Shell managers who will dismiss OCI’s analysis and Follow This’ shareholder action. They will believe the company’s own internal public relations.

They are fed a false truth. We know this. Decades ago for example, on the day that the writer Ken Saro-Wiwa and others were murdered by the Nigerian government, the company had a letter on the desk of each employee saying that the deaths was nothing to do with them. It was a masterful act of deliberate denial.

But it was a lie then. It remains a lie. The letter ignored the evidence of Shell’s complicity in their deaths, with key witnesses at the trial of the Ogoni 9 saying that they had been bribed by Shell.

OCI and others are not the only ones speaking truth to Shell’s lies. Occasionally, just occasionally, someone breaks through Shell’s parallel universe where it believes it will solve climate change and carry on drilling at the same time.

Yesterday, top executives at Shell were left reeling when a senior safety consultant publicly shared what has been described as a “bombshell” letter accusing the company of causing “extreme harms” to the environment.

Shell was a major client to the safety consultant, Caroline Dennett, who claimed the company had a “disregard for climate change risks” and urged others in the oil and gas industry to “walk away while there’s still time”.

Dennett, who works for the independent agency Clout, sent her letter to Shell’s top executives as well as 1,400 staff. It stated “Shell’s disregard for climate change” means the company is “completely failing” on its stated ambition to “do no harm”.

She said that “Shell is fully aware that their continued oil and gas extraction and expansion projects are causing extreme harms, to our climate, environment, nature and to people.”

She said she could no longer “work for a company that ignores all the alarms and dismisses the risks of climate change and ecological collapse”.

Contrary to Shell’s public expression around Net Zero, they are not winding down oil and gas, but planning to explore and extract much more.

She said that Shell should be “using all its capital, technical and human power to lead the transition, but they have no plan to do this.” Finally she said: “We must end all new extraction projects immediately and rapidly transition away from fossil fuels, and towards clean renewable energy solutions.”