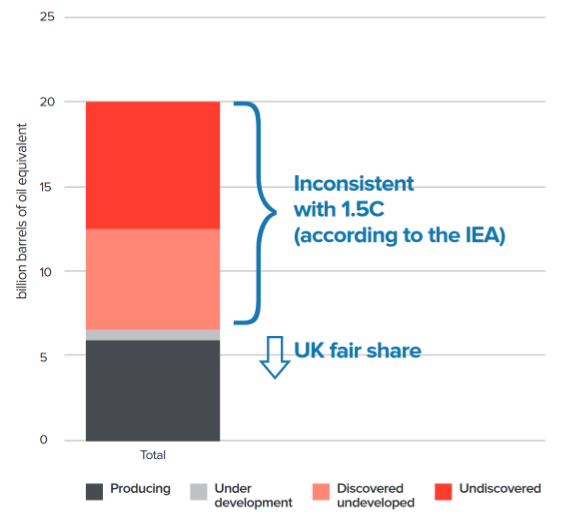 The UK House of Commons Environmental Audit Committee have launched a inquiry into Accelerating the transition from fossil fuels and securing energy supplies, which is scrutinising the UK Government’s Energy Security Strategy and its North Sea Transition Deal (for oil and gas production in the UK’s Continental Shelf). Oil Change International submitted the following evidence for the committee.

This evidence is submitted on behalf of Oil Change International, a research and advocacy organisation that aims to facilitate and accelerate the transition of our energy systems from fossil fuels to clean energy. Oil Change International works with governments, investors and civil society organisations to help align energy decisions with climate limits. In this evidence we submit findings from two areas of research:

3. In this written evidence, we concentrate on four of the twelve questions listed in the TOR.

4. Q: Can the UK’s oil and gas reserves be exploited while limiting global temperature rise to 1.5°C in line with the Paris Agreement?

5. There is strong scientific consensus that ending the expansion of global fossil fuel production immediately and phasing it out rapidly is necessary to avoid the worst impacts of climate change. Any further delay in action will lock in warming beyond 1.5°C.

6. The first part of the Sixth Assessment Report from the Intergovernmental Panel on Climate Change (IPCC) Climate Change 2021: The Physical Science Basis from August 2021 finds that due to past emissions, all mapped scenarios lead to warming that exceeds the 1.5°C target by 2050. Only one scenario allows temperatures to return below that level by 2100. The third part of this IPCC assessment, on mitigation, warns that if fossil fuel emissions continue at present rates in the near term, the global carbon budget for keeping warming below 1.5°C will be exhausted by 2030.

7. The 1.5°C-aligned scenario from the International Energy Agency (IEA) shows that no new oil and gas fields are needed as of 2022 if the world is to hold warming to 1.5°C. This conclusion follows from basic arithmetic: the production decline rate from conventional oil and gas fields mirrors the rate of decline in consumption needed to stay below 1.5°C. In other words, already-producing and under-construction fields globally hold enough oil and gas reserves to meet demand. Thus, sinking capital into developing new fields would either trigger even more dangerous levels of warming or require a larger scale of stranded assets, wasting capital that needs to shift into clean energy.

8. The IEA’s conclusion is a conservative one. A forthcoming peer-reviewed study in Environmental Research Letters finds that already developed fossil fuel extraction facilities hold significantly more reserves than can be extracted and burned under the 1.5°C limit. Even if coal is rapidly phased out, the CO2 emissions from burning the oil and gas in already-operating or under-construction fields could exceed the remaining carbon budget to stay below 1.5°C. Consequently, not only should new development cease, but also governments will need to actively manage a faster phase-out of production – by revoking some active production licences and ensuring some already-producing oil and gas fields are decommissioned ahead of schedule.

9. Despite this mounting evidence, the 2021 Production Gap Report, commissioned by the United National Environment Programme, shows that governments still plan to produce more than twice the amount of fossil fuels in 2030 than would be consistent with limiting warming to 1.5°C. The UK will continue contributing to this misalignment of planned production and global climate goals unless it puts policies in place to stop new development and accelerate the phase-out of existing fields.

Figure 2: UK Cumulative Future Projected Oil and Gas Production. The IEA states that to limit warming to 1.5ºC, no new fields can be developed. Furthermore, an equitable approach means that the UK must phase out a portion of already-developed reserves early. 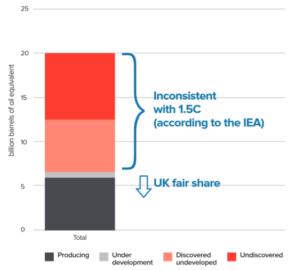 11. The IEA roadmap and guidance that there should be “no new oil and gas fields approved for development” means that the 13.5 billion barrels of as yet undeveloped UK oil and gas needs to stay that way, with no further exploration, licensing or development.

12. The UK has a responsibility to lead the phase-out of its own oil and gas production in order to make an equitable, 1.5°C-aligned transition possible. A new report from the Tyndall Centre for Climate Change Research concluded that wealthy, economically diversified countries, including the UK, must reduce their oil and gas extraction by 74 percent by 2030 and phase it out by 2034 for the world to maintain a 50 percent chance of limiting warming to 1.5°C.

13. Figure 3 shows projected UK oil and gas production, with and without new fields, compared to the UK’s ‘fair share’ phase-out pathway indicated by the Tyndall study. The data show that, without any new development, production from existing fields alone could exceed the UK’s fair share within a few years. To facilitate an equitable global transition, the Government should accelerate this phase-out of production, along with its investment in a just transition domestically and internationally.

Figure 3: Projected UK Oil and Gas Production With and Without New Fields, Compared to the UK’s ‘Fair Share’ Phase-out Pathway 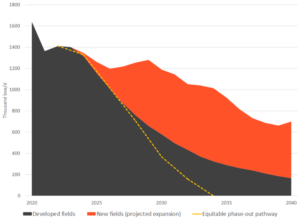 Source: Oil Change International analysis using data from the Rystad Energy UCube (April 2022) and Calverley and Anderson (2022). The yellow dotted line applies the phase-out timeline that Calverley and Anderson assign to oil and gas producing countries with the greatest economic capacity to manage a rapid transition (‘Group 1’ countries, including the UK) in: Phaseout Pathways for Fossil Fuel Production Within Paris-compliant Carbon Budgets.

14. Q: Should the Government revise its policies on onshore energy generation or exploration in light of the energy security situation? Given the current and potential speed of deployment, what low-carbon energy sources are most likely to rapidly secure supplies of affordable and sustainable energy?

15. There is no need for the UK to change its policies regarding onshore fossil energy exploration on land, such as shale gas. Even in light of the energy security situation, the climate science is as clear as it was before Putin’s war in Ukraine: there is no room for new oil or gas production.

16. When the IEA released its net-zero scenario in 2021, IEA Executive Director Fatih Birol declared, “If governments are serious about the climate crisis, there can be no new investments in oil, gas and coal, from now – from this year.”

17. At the same time, the speed of development for new oil and gas supply is extremely slow. Before a field can start producing oil or gas, it must go through three stages: exploration, appraisal and development. The average time from the first discovery of gas to first production from a field in the UK is 28 years, meaning that licences awarded this year would on average only lead to fields being brought online by 2050. Given these long lead times, new onshore exploration or field development will not ease the current energy situation, nor will it meaningfully contribute to phasing out Russian gas over the medium term, whilst it will worsen the climate crisis.

18. A briefing from Dr Simon Cran-McGreehin published in the respected newsletter Energy & Climate shows how insulation and heat pumps can cut the UK’s dependency on Russian gas permanently. The briefing shows how the UK could reduce gas demand by the equivalent of its imports from Russia by as early as 2027. In just over 10 years’ time, gas savings would reach 80TWh per year, which is over 25 percent of current household gas demand and about 10 percent of total UK demand.

19. Q: What impact will high prices for oil and gas have on production and the net zero transition? What are the pros and cons of a windfall tax levied on fossil energy producers? How should the revenue from any levy be allocated?

20. Companies producing oil and gas in the UK are set to generate an additional £11.6 billion in free cash flow in 2022, primarily due to the Russia-Ukraine war’s impact on oil and gas prices. As these companies profit, UK consumers bear the burden of ever-rising retail prices.

21. Currently, oil and gas companies pay ~ 40 percent tax on the profits arising from their extraction of fossil fuels from the North Sea. This is the lowest government tax rate in the world for an offshore oil and gas regime.

22. In addition, the average oil price in 2022 is expected to increase 58 percent due to the war, while the projected profit from extracting UK oil and gas could rise on average by 111 percent. This is a clear indicator of the current tax regime’s failure to capture a share of rising commodity prices for the state and public needs. 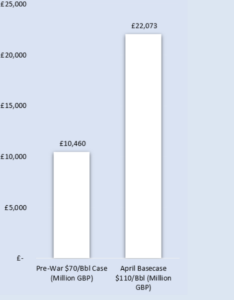 23. A windfall tax on these profits would be reasonable and indicate the Government’s prioritisation of the public benefit over private windfalls. The IEA has also recommended that countries introduce a windfall tax in its 10-point plan to reduce the EU’s reliance on Russian natural gas. Furthermore, the IEA recommends that these tax receipts should then be redistributed to electricity consumers to partially offset higher energy bills.

24. Our analysis shows that if £5 billion was used for supporting energy efficiency and clean energy development, the remaining £6.6 billion would provide the six million households experiencing fuel poverty £1,100 each. This would still leave the oil and gas companies with the £10.5 billion in free cash flow they were in line to enjoy prior to Russia invading Ukraine and spiking prices.

25. No major oil and gas company has yet outlined a credible plan for transitioning their business in line with the 1.5°C limit, and companies’ capital expenditures still flow overwhelmingly to fossil fuel investments. In recent months, major investor-owned oil and gas companies have used rising profits to increase dividends and share buybacks for investors, even as UK families struggle to pay spiking bills.

26. Without a windfall tax, oil and gas companies could use high prices to justify increased investments in new fossil fuel projects, which would push the world further beyond climate limits and/or require more fossil fuel assets to be stranded later on. Even if some companies choose to invest some excess profits into clean energy, this would not necessarily have a positive climate impact – unless this is paired with a concurrent phase-down of investments in and production of oil and gas. With a windfall tax, the Government can minimise the negative and maximise the positive effects of higher prices, redirecting excess fossil fuel profits into support for struggling families and solutions that will reduce future price shocks and pollution by accelerating the clean energy transition.

27. Q: Should the Government continue to provide tax relief or financial support to the fossil fuel industry, such as the ring-fence corporate tax relief for new oil and gas fields?

29. The UK’s domestic fossil fuel subsidies are estimated at USD 14.8 billion a year, and should be phased out. In the tax years 2015-16 and 2016-17, the Treasury gave more money to oil companies than it took from them in taxes. OCI analysis shows that public subsidies and support for oil and gas production introduced since 2014 will have the effect of adding twice as much carbon pollution to the atmosphere as the UK’s phase-out of coal power will save.

Figure 5: Effect on 2016-2050 Carbon Emissions of UK Support and Subsidies for Oil and Gas Extraction versus UK coal phase-out