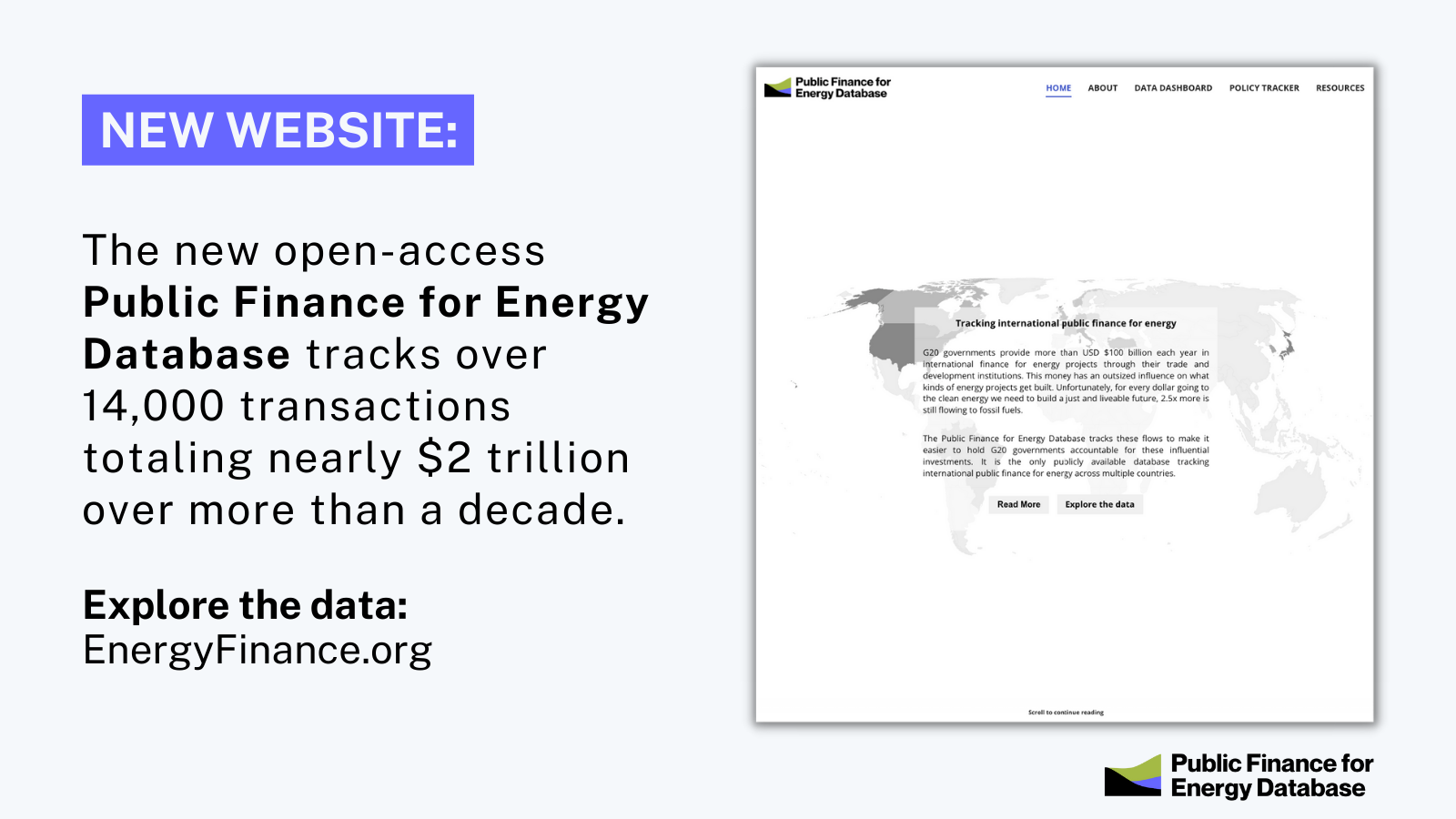 Public finance institutions shape our future energy systems. They are uniquely positioned to catalyze a just, transformative, and rapid transition to clean energy and a livable future — if we can hold them accountable to their public-interest mandates. But the decade-plus of data Oil Change International has collected for the newly launched Public Finance for Energy Database (energyfinance.org) shows most influential international public finance institutions are failing to take the very first step: stop funding fossil fuels.

The headline finding of our database is that G20 countries’ trade and development finance institutions and the major multilateral development banks (MDBs) provided at least $63 billion each year to coal, oil, and gas projects between 2018 and 2020. That is 2.5 more than the support for clean energy by the same institutions over the same period. 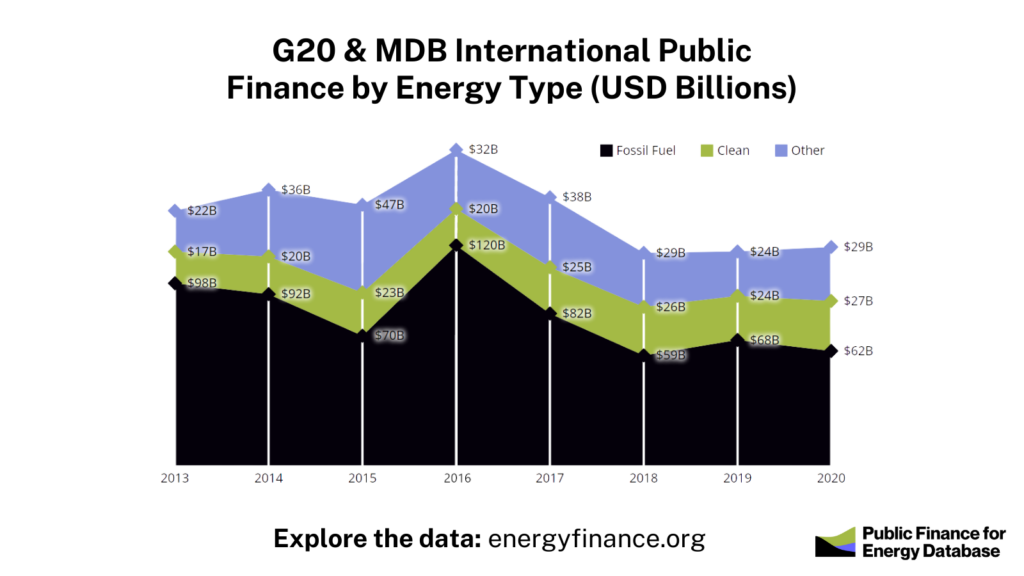 We previously published the reports Past Last Call (2021), Still Digging (2020) and Talk is Cheap (2017) with Friends of the Earth US detailing the trends this data shows. The IPCC, BloombergNEF, Reuters, Energy Monitor, Nature, Cambridge University, and International Institute for Sustainable Development among others have in turn used the findings from these reports. We are excited to now make this data fully publicly available to arm climate justice organizers around the world.

In a new briefing released alongside Public Finance Energy Database, we outline why public finance is so important. First and foremost, limiting global warming to 1.5°C requires governments to put an immediate halt to public finance for fossil fuel projects and instead shift this to clean energy and a just energy transition. The Intergovernmental Panel on Climate Change (IPCC) concluded in its April 2022 report that global financial flows remain severely misaligned with the Paris goals, with large scale public finance for fossil fuels singled out as the most glaring example.

The impact of public finance reaches beyond its direct scale. Public finance institutions can give below-market rates, extra technical advice, longer loan periods, and other benefits that help make a project a less risky and more attractive investment for private financiers. This tips the scales on which projects get built, and which don’t. However, current G20 international public finance for fossil fuels, which contradicts decades of climate commitments, is not just fueling the climate crisis. It is also locking out just development and adding to unfair debt burdens in the Global South, and subsidizing Putin’s unprovoked war, other fossil-fueled conflict, and human rights violations around the world.

The good news is there is momentum for international public finance institutions to finally keep their promises to stop funding fossil fuels. At COP26 in Glasgow in 2021, 39 countries and institutions signed a joint commitment to end international public finance for fossil fuels by the end of 2022 — a deadline that is fast approaching. With some of the largest historic fossil fuel financiers joining the commitment, including Canada, the United States, and Germany, the initiative has the potential to directly shift at least $24 billion a year in international public finance from fossil fuels to clean energy, which would help shift even larger sums of private finance — while pressuring non-signatories from the G20 and G7 to follow suit. But alongside this opportunity, there is a still risk of bad-faith implementation that leaves loopholes for continued fossil fuel support.

What can you use Public Finance for Energy Database for?

The Data Dashboard can be configured to identify key trends in G20 and MDB financial flows for 2013 to 2020. We update the data once a year because of lags in reporting, so data for 2021 will be available in Fall 2022. We are limited by what governments and media report and so these totals are almost definitely an underestimate.

You can configure the data dashboard to show different trends:

You can also download the full dataset to look at other details like funding for a specific project, what kind of financial mechanisms are used, the breakdown by energy sub-type, and funding by supply chain stage.

We also built a live policy report card that tracks G20 country and MDB progress in keeping their promises to implement policies to exclude investments in coal, oil, and gas across the supply chain.

Watch this clip from our press conference launching the database to learn more about how to use the site:

Use the Public Finance for Energy Database and its explainer briefing to hold G20 countries accountable to climate action commitments – and turning those commitments into strong policies to #StopFundingFossils.