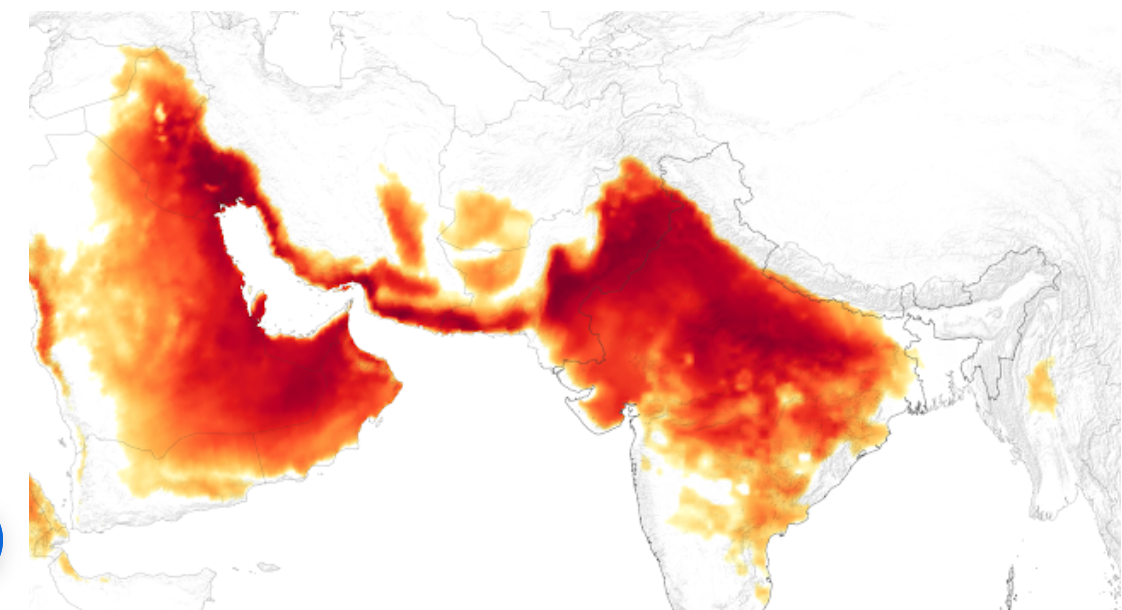 With the war in Ukraine dragging on into its second month, there is a relentless depressing news cycle. But as war dominates, other issues slip from the news agenda.

And as so often has been the case in the past, the coverage of climate change is a victim. But what is happening in India and Pakistan deserves global attention. It has experts and activists deeply worried on Twitter:

It's day #2 of this Indian/Pakistani Heat wave:Today 27 April Nawabshah in #Pakistan reached 47.5C new high in the Hemisphere in 2022. In #India 45.6C at Rajgarh. 43C also in Myanmar and Thailand. Next days will be worse and Central Asia will also approach 40C pic.twitter.com/kByJSoKAzG

It has been hot over India and the heatwave is forecast to continue, with severe impacts. A heatwave that would have been rare without climate change but is, like heatwaves around the world, much more common now & will become more & more so as long as we burn fossil fuels. pic.twitter.com/bE1O8wMMsQ

I've been going on about India for the last week on Twitter but this is getting more urgent by the moment.
After a brutal heatwave in April – mid SPRING for them – things are set to get much much worse. Temperatures are forecast for 46-49°C next week. pic.twitter.com/Vy4obQQBCW

What is happening now in Asia in India and Pakistan should be front-page news, say climate justice activists. Killer heat and other climate related weather, should be a global headline.

What headline news should have said today

1 India's extra-severe heatwave is baking a billion people
2 Ethiopia facing worst drought in at least 40 years
3 Many missing after floods killed 450 in South Africa
4 UK set to be colder than Sweden with -5C forecast in May#climate pic.twitter.com/ndMaFyxeHd

One major newspaper that has covered the story, the Washington Post, ran the headline: “Record heat has gripped India since March. It’s about to get worse.”

The paper noted that although several cities across the nation registered highs over 109 degrees (42.8 Celsius)… Temperatures are forecast to rise further, leaping 10 to 15 degrees (5.5 to 8.3 Celsius) above average during the second half of this week.

Today and tomorrow, temperatures may reach 110 to 115 degrees (44 to 46 Celsius). By Friday and Saturday, the temperatures could climb as high as 120 degrees (49 Celsius) if the most extreme forecast models are correct. Meanwhile, In Pakistan. Multiple stations set all-time monthly records during February and March.

And heat has consequences. In India, rainfall has been its third-lowest for over one hundred and twenty years. Likewise, India is suffering from its hottest March since 1901.

Rajendra Jenamani, from the National Weather Forecasting Centre told the Times of India: “Climate change is impacting severe weather intensity and duration, even in India – be it in terms of heatwaves, cyclone intensity or even heavy rainfall”.

Meanwhile, our CO2 concentrations and global temperatures creep ever higher, and we are now seeing the highest ever CO2 levels for two million years. This is the graph on rising temperatures:

This plot is terrifying. World leaders have demonstrated they are content to keep the planet on that black dotted line. We have to fight like hell, together, to get off of it. pic.twitter.com/THmvQQhaBV

So our climate emergency is set to get worse, both in the short term and long term. A report issued earlier this week by the United Nations Office for Disaster Risk Reduction warned the world will go from around 400 disasters per year in 2015 to an onslaught of about 560 catastrophes a year by 2030.

The number of extreme heat waves in 2030 will be three times what it was in 2001. Mami Mizutori, chief of the U.N. Office of Disaster Risk Reduction, said: “If we don’t get ahead of the curve, it will reach a point where we cannot manage the consequences of disaster. We’re just in this vicious cycle.”