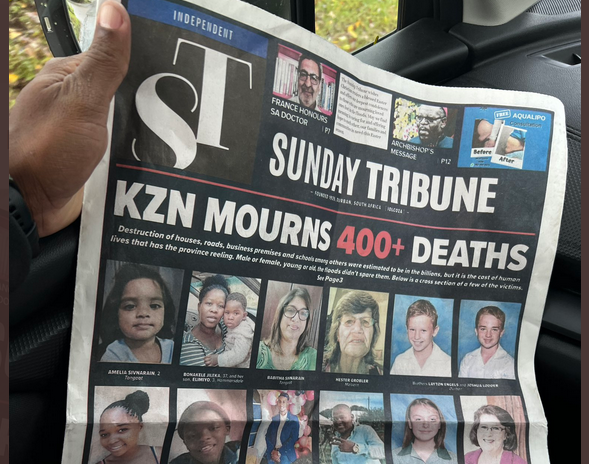 After some of the most destructive flooding ever to hit South Africa last week, which resulted in over 400 killed and 40,000 displaced, climate activists are calling on the government to speed up the transition away from fossil fuels.

After the worst rains for sixty years, which occurred in the coastal city of Durban and the surrounding Kwazulu-Natal province, South Africa declared a national state of disaster.

The floods wiped away homes, businesses, roads, bridges and affected some 600 schools. People were washed away as they slept, or traveled in their cars.

Eight weather stations in KwaZulu-Natal set new records for rainfall, with some stations recording over 300 mm of rain over a twenty-four hour period. This is unprecedented damaging rain and 100 mm more than a typical tropical cyclone. The local infrastructure and buildings could not withstand such a deluge.

Writing in the Daily Maverick, Professor Tshilidzi Marwala, the Vice-Chancellor and Principal of the University of Johannesburg warned that the “Durban floods are just the beginning, and freak weather phenomena such as this will become much more commonplace.”

In fact, the pattern is already clear, argued Marwala. “This has not been an isolated event. Over the last few months, southern Africa has had to weather extreme weather conditions, including cyclones, tropical storms and flooding. It is estimated that just this year alone and based on early estimates from Durban, almost 300 people have died in the region.”

The floods came days after a report by the World Weather Attribution group highlighted how extreme rainfall was becoming more common. They said that the region had been hit by three cyclones and two tropical storms in six weeks, with over one million people affected.

One of the scientists involved in the Word Weather Attribution report, Dr. Friederike Otto, from the Grantham Institute, Imperial College in London, said: “Again we are seeing how the people with the least responsibility for climate change are bearing the brunt of the impacts. Rich countries should honour their commitments and increase much-needed funding for adaptation, and for compensating the victims of extreme events driven by climate change with loss and damage payments.”

He was not the only one calling for action. Glen Tyler Davies, the South Africa Team Leader for 350Africa.org said in response to the KwaZulu-Natal flooding, “as scientists project worsening climate impacts as a result of global warming, we reiterate the need for our nation to accelerate plans for a just transition away from fossils and urge financial institutions to stop the flow of finance into the polluting fossil fuels which are exacerbating the climate crisis.”

Climate activists are also now calling for the country’s President , Cyril Ramaphosa and the KwaZulu-Natal Premier and ministers to be charged with “culpable homicide” following the devastating floods.

In a statement, the Climate Justice Charter Movement said: “The South African government has failed to take the climate crisis seriously and it must be held accountable for its dereliction of duty.”

The statement added “If the South African government took its Paris Climate commitments seriously, heeded climate science and appreciated the pattern of extreme climate impacts in everyday life, the country would have been on a climate emergency footing a long time ago.“