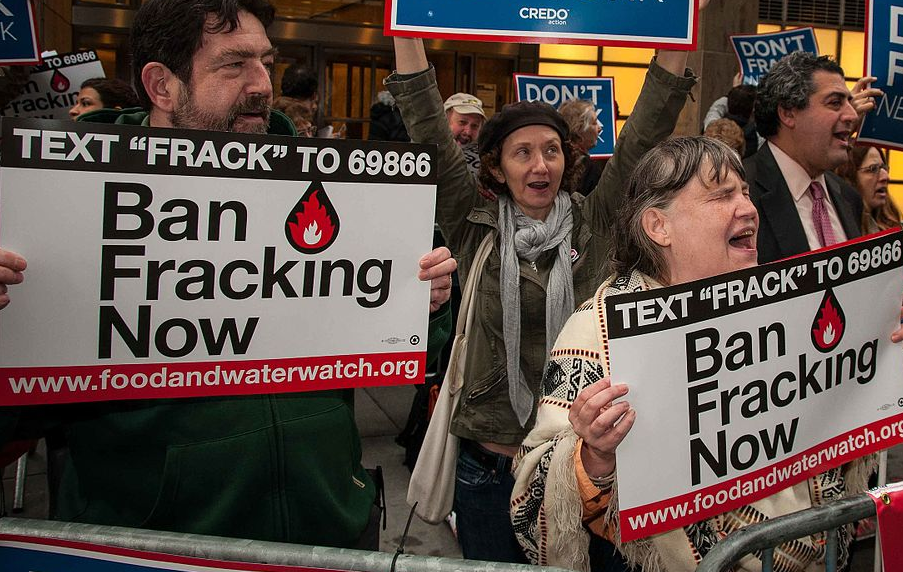 Just as the U.S. oil and gas industry is looking to exploit the Ukraine war to expand exploitation of shale gas, so too is the European shale gas industry.

Back in October 2019, the UK Government ended its support for shale gas extraction – also known as fracking – on the basis of a report by its advisors, the Oil and Gas Authority (OGA).

The report had found that it was “not currently possible to accurately predict the probability or magnitude of earthquakes linked to fracking operations.”

It is hardly surprising that the OGA had come to this conclusion as one of the flagship fracking operations in England had been plagued by numerous serious tremors caused by shale drilling.

The UK Government’s stance annoyed the pro-fracking lobby, whose chief cheerleader was the billionaire, Jim Ratcliffe, whose company INEOS, calls itself Britain’s biggest private company. INEOS, who had at one stage been looking to drill dozens of test wells, claimed it had found potentially commercial amounts of shale gas in 2019.

It is hardly surprising therefore, that INEOS is using the Ukraine war to try and push for shale gas exploitation in the UK again. The company is offering to drill a test fracking site to show that the technique can be done “safely”.

On Monday, this week Ratcliffe said: “It’s a ridiculous situation with so much gas under our feet and we are today offering to drill a shale test site to show that a competent operator can be trusted to develop the technology safely.”

The billionaire also attacked renewable energy stating that it “is not yet reliable enough to take over” and therefore “the UK will need gas for the next 30 years as it goes through the energy transition.”

It also came just days after the latest report by the world’s leading climate scientists, the Intergovernmental Panel on Climate Change, once again called for urgent action on climate change. One of the lead scientists, a co-chair of Working Group III, Jim Skea said bluntly: “It’s now or never, if we want to limit warming to 1.5°C.”

Last week, the #IPCC released the third part of its Sixth Assessment Report, looking at ways to limit & prevent human-caused emissions that contribute to #globalwarming.

The head of the UN tweeted:

It is time to stop burning our planet & start investing in the abundant renewable energy all around us.

New @IPCC_CH report sets out viable, financially sound options in every sector that can keep the possibility of limiting global warming to 1.5° alive. https://t.co/xzccxqeTT4

But Ratcliffe and INEOS are betting on us never having a liveable future and exploiting gas for 30 more years. They are ignoring over a decade of scientific evidence that fracking causes harm. They are ignoring decades or warnings about climate change too.

In its press release INEOS stated: “In the US, over a million wells have been drilled and safely operated for the past 15 years and have transformed the energy security of that country.”

In that statement, INEOS simply ignores crucial evidence from the US. Three years ago, Oil Change International’s (OCI) co-research director, Lorne Stockman, participated in the launch of a Compendium on shale gas, which had been written by the Physicians for Social Responsibility (PSE) and Concerned Health Professionals of New York. Entitled the “Compendium of Scientific, Medical, and Media Findings Demonstrating Risks and Harms of Fracking”, it examined the latest scientific studies and government reports on fracking. It ran to six hundred and sixty one pages.

The compendium concluded that that “90.3 percent of all original research studies published from 2016-2018 on the health impacts of fracking found a positive association with harm or potential harm.”

The report’s conclusion was damning: “The rapidly expanding body of scientific evidence compiled and referenced in the present volume is massive, troubling, and cries out for decisive action.” And that action was to ban fracking: “The only method of mitigating its grave harm to public health and the climate is a complete and comprehensive ban on fracking”, concluded the report.

One of the scientists who wrote the report, Sandra Steingraber, said: “There is no regulatory framework for fracking that will keep the toxins out of air and water, or will protect the climate from carbon and methane releases. It can’t be done. It can’t be made safe. Like lead paint, we finally have to ban it.”

Since that report was published, OCI and Lorne have been looking more closely at the problems associated with fracking in the Permian Basin, the largest oil producing region in the U.S. Last year, OCI published a report on the Permian and a designated microsite called the Permian Climate Bomb. The findings are beyond reproach, especially in relation to climate change and the impact on communities.

Regarding climate change, the report concluded that we cannot carry on drilling for shale gas in the US if we want a liveable future. “The trajectory of Permian oil production this decade is in the opposite direction to what the Intergovernmental Panel on Climate Change says will be needed for staying under 1.5oC”, said the report, leading to a “50% rise as opposed to a 40% decline.”

One of the biggest problems associated with shale extraction is the leakage of methane, one of the most potent greenhouse gases. At the current rate of extraction, methane emissions in the Permian Basin would emit over 9.5 billion tons of CO2 equivalent (CO2e) by 2050. Again, if we want a liveable future, we cannot carry on extracting leaking shale gas.

Then there is the desperate toll on local communities living close to extraction sites who are exposed to toxic air and water. As the Permian report highlighted: “Roaring flares light their night skies. Heavy truck traffic destroys their roads and poses heightened safety risks to their everyday lives.”

The report included personal stories of shattered lives. Jim and Sue met in Balmorhea, Texas, and could see twenty wells from their backyard: “Then came the decline in their health. They began to experience consistent severe nosebleeds,” outlined the report. “Stabbing headaches often woke them in the night. Sue, who had never had respiratory problems before, was put on three different medications to breathe.”

It continued: “Gas flares threw off intense light and noise at all hours of the night, making sleep elusive. As torturous as that was, unlit flares took an even bigger toll on their health as they spewed methane and volatile organic compounds (VOCs) into the air they breathed.”

They were not alone. Another couple highlighted were the farmers, Penny Aucoin and Dee George, who lived close to another frack site. When a local produced water pipe burst, “it showered their farm animals, land and home with the toxic water.

Both Dee and their son had severe nose bleeds as soon as they went outside to investigate the commotion from the burst pipe. The whole family had to immediately barricade themselves indoors and turn off their air conditioning to breathe.”

As one of the contributors to the report, John Beard, from the Port Arthur Community Action Network said, the Permian fracking boom “has contributed to environmental degradation, significant loss of quality of life, nonattainment air quality, water-borne pollution, and diminished health for my fenceline community. Fracked Permian gas contributes to our significantly higher risk of cancer, heart lung and kidney disease.”

He added “We can no longer afford to be the unwitting victim of this exploitation from the use of fracked Permian gas; it needs to end, now.”

The evidence is overwhelming from the Permian that fracking is dangerous to local communities and the climate. You do not need to drill a test well in the UK to find that out. We have the solutions to the energy crisis caused by the Ukraine war. And UK shale gas is not one of them.