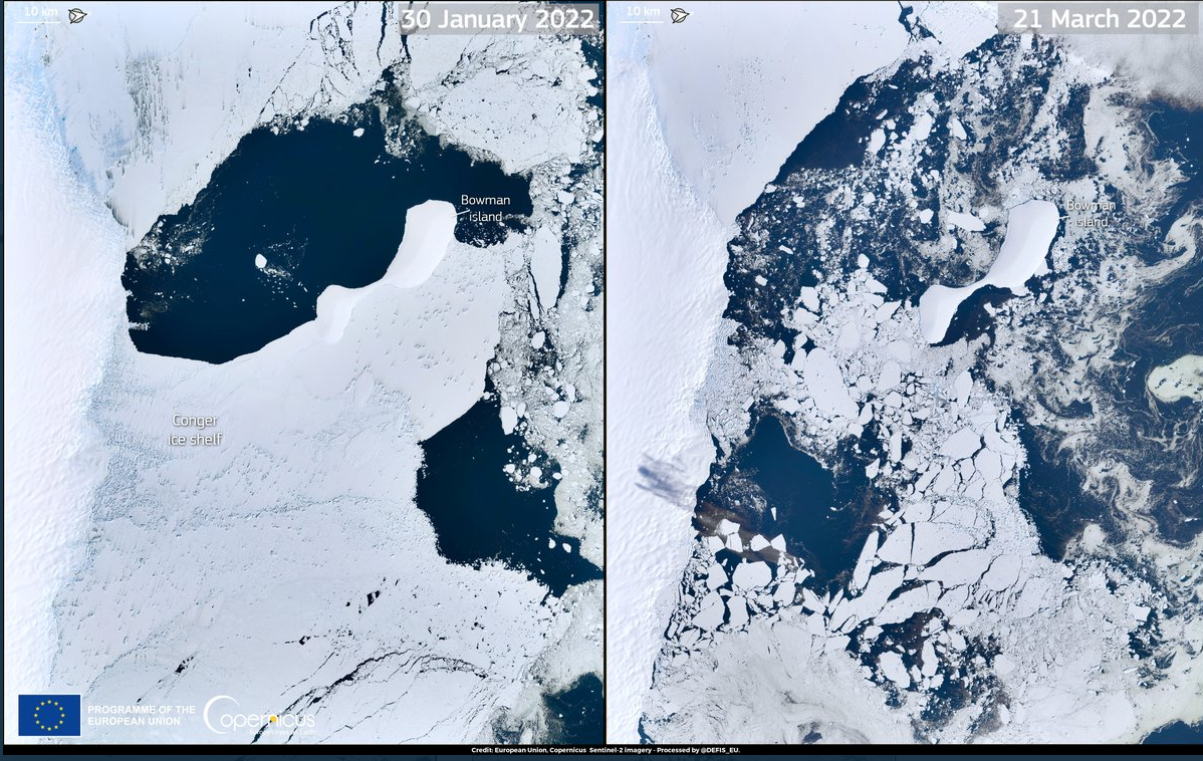 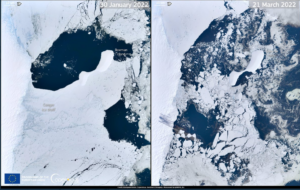 While much of the world’s media attention is focused on Putin’s illegal and horrendous war in Ukraine, our daily climate emergency has slipped from the headline news agenda.

But what is happening in the Arctic and Antarctica is alarming scientists and activists alike.

Firstly the heat. Last week, it was reported that both the Arctic and Antarctica were experiencing extreme heat events. We are not talking about a couple of degrees warmer than usual. We are talking tens of degrees. Parts of Antarctica were 40 degrees Celsius warmer than usual. Meanwhile at the other end of the earth, the Arctic was 30 degrees Celsius hotter.

The temperatures are alarming scientists. Walt Meier, from the National Snow and Ice Data Center in Boulder, Colorado told the Independent, “they are opposite seasons. You don’t see the north and the south [poles] both melting at the same time.” As Meir called the readings “unusual,” other leading meteorologists called it “dramatic.”

jesus i’ve never seen a climate graph like this one pic.twitter.com/741PbbR3qC

? The recent extraordinary heatwave in Antarctica appears to have set a new World Record for the largest temperature excess above normal (+38.5 °C / +69.3 °F) ever measured at an established weather station. pic.twitter.com/1Z5AiG4DU5

As temperatures soar the ice continues its relentless melting. For decades scientists have been warning about Antarctic ice melt and what it could mean for global sea level rise. The reason is very simple, the continent contains enough ice to raise global sea levels by around 180 feet if all melted.

Last Friday, it was reported that an ice shelf the size of New York, the Conger ice shelf, collapsed in East Antarctica. What is alarming scientists is that this region of the frozen continent has long thought to be stable. It is the coldest, driest part of the continent. This is the first time that this part of Antarctica had experience such a significant loss.

“I don’t think there has been a shelf collapse like this in East Antarctica since we’ve been able to receive satellite data,” Rob Larter, a marine geophysicist at the British Antarctic Survey, told CNN.

Helen Amanda Fricker, a Professor of Glaciology at Scripps Polar Center, who studies the Antarctic Ice Sheet, added on twitter that “East Antarctica is this big elephant in the room that we haven’t really started properly tackling. It’s huge.”

The ice shelf, which is 1200 square kilometers, may have been melting for some time but the record temperatures seem to have “been the last straw” according to Dr. Robert Rohde, the Lead Scientist Berkeley Earth in California.

Moreover, glacial scientists are now worried that due to rising temperatures, the East Antarctic ice sheet may not be as stable as previously thought. And that ice sheet alone could raise sea level by 160 feet or 50 meters.

Ted Scambos, a glaciologist at the University of Colorado at Boulder and lead scientist at the National Snow and Ice Data Center, told CNN that the ice shelf’s collapse could be a preview of what is to come due to climate change. “If we don’t put the brakes on, if we don’t slow this process down, then we’re in for very rapid rates of sea level rise probably before the end of the century.”

In the short term, though, focus is now back on West Antarctica, where scientists are also worried about the Thwaites glacier. Long known as the doomsday glacier, if it collapsed it could raise global sea levels by two feet.

But it also serves as a bottleneck for the largest West Antarctica ice sheet behind. Scientists are alarmed at the growing large cracks on the glacier and what will happen if it collapses, which some scientists predict will be before the end of this decade. Associate Professor Julia Wellner, a marine geologist at the University of Houston even calls Thwaites “the most important glacier in the world.”

In the meantime, commentators were quick to highlight the disparity over the record temperatures in Antarctica and the Cougar ice shelf collapsing and the minimum news headlines it generated, compared to someone being slapped at the Oscars, a story that made headlines around the world for two days.

The thing about Will Smith slapping Chris Rock is that an ice shelf in what's supposed to be the stable part of Antarctica just collapsed https://t.co/Ex2gdtjHZI

My thoughts on the Oscar Slap incident are that it’s 70 degrees in Antarctica and what’s left of the livable ecosystem is being destroyed and so we should focus on that.