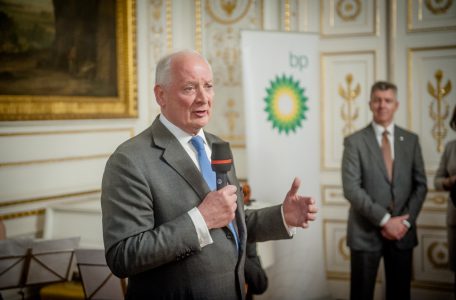 A key British Russian lobbying group, the board of which included executives from BP, and whose hierarchy included British Royalty, British and Russian Ambassadors and ex-British parliamentarians, has quietly erased online content about its activities and personnel over the last few weeks.

The group, the Russo-British Chamber of Commerce, (RBCC) represents the crème de la crème of the British and Russian establishment, and has given BP and other corporate members unfettered access to key Russian dignitaries for years. It has facilitated trade between the two countries for over one hundred years.

The RBCC is well connected. The patron of the RBCC is Prince Michael of Kent, a Russian speaker. According to the Prince’s biography on the website: “Related through his grandmother to Tsar Nicholas II, Prince Michael has always had a strong emotional attachment to Russia, which he first visited in 1992, following the collapse of communism. Now Patron of the Russo-British Chamber of Commerce, he has returned to the country many times since then on business.”

In 2009 , the Kremlin awarded the Prince the Order of Friendship for his work in furthering Anglo-Russian relations, although this was reportedly returned after the invasion of Ukraine.

The Honorary Presidents of the RBCC are Andrei V. Kelin, the Russian Ambassador to the UK, and the British Ambassador to Russia, Deborah Bronnert. In January 2022, Kelin told Sky News that Russia had “no intention” of invading Ukraine and blamed NATO for increasing tensions in the region.

The Board of the RBCC includes not one, but two senior executives from BP. The first is David Campbell, President of BP Russia. The second is Emily Olson, the Senior Vice President for BP Russia who “supports the BP executive team and BP board on matters related to our Russia business.” Prior to BP, Olson spent over a decade in Washington D.C. working for the U.S. Congress focusing on developing energy and transportation policy.

Not that you would know that now as all this information has been scrubbed from the website. The “What we do” section on the website, now says “Page Not Found.”

Same with the “Our people” or “History” section. Much of the content of the site is now deleted, only visible via the Internet Archive, the WayBackMachine.

Meanwhile Roger Mannings, the chairman of the RBCC, who was on the board of Lukoil, Russia’s second-largest oil producer, has resigned his Russian oil position since the invasion.

One of the events that has been erased from the website is a “Business Cocktail” event which appears to have been hosted by the British Embassy in Moscow back in April 2017. In the picture, enclosed above, you can clearly see a BP promotional stand in the background.

This event happened just days after chemical weapons had been used in Syria. Prime Minister Boris Johnson, then UK foreign secretary, had called off a visit to Moscow in the wake of the attack saying “We deplore Russia’s continued defence of the Assad regime.”

It is not the only event that BP had influential access to via the RBCC. Last December, the lobby group ran a “Christmas networking event with BP,” advertised on its Facebook Page, and held at BP’s London headquarters. Two months previously, in the run up to the COP26 Climate talks, there was another an online event: “What do Russian and UK businesses want out of COP26,” at which BP was one of the speakers.

What do UK and Russian Businesses want out of COP26? Join the #RussiaTALK21 Panel 1 on 13th October to find out!
Explore agenda and register: https://t.co/gEfscFXmi1 pic.twitter.com/cAi9mE1AyH

Some seven months previously, the RBCC and BP hosted an event with BP President David Campbell, where Campbell said that the “Energy sector is a driving force of decarbonisation,” despite the fact that the oil majors have been criticized for years over their climate plans.

-In Russia we are pleased to see rapidly evolving climate legislation, which is helping industry corporate goals

-Energy sector is a driving force of decarbonisation

The RBCC has also tweeted official Russian Government propaganda about how much Vladimir Putin was committed to climate action and solving other “acute global problems.” One tweet, below said:

?#Putin: Russia is genuinely interested in stepping up international cooperation so that we can continue to search for effective solutions to climate change & other acute global problems.

The fact is BP, along with other major oil companies such as TotalEnergies, Shell, and Exxon, has enjoyed the diplomatic support of their governments and elite institutions such as the RBCC, for the entirety of Putin’s rein.

It was clear from the start that Putin was not interested in democracy or the rule of law and that he was not averse to mass murder in the pursuit of his interests – witness what happened in Grozny or Aleppo.

Assertions that engagement could push him in the right direction have rung hollow time and again. That these companies and organizations stuck with a policy of engagement in the face of increasing brutality and authoritarianism is a source of shame.

No surprise then that they are deleting website content in an attempt to wipe the institutional memory, and with it their reputations, clean.