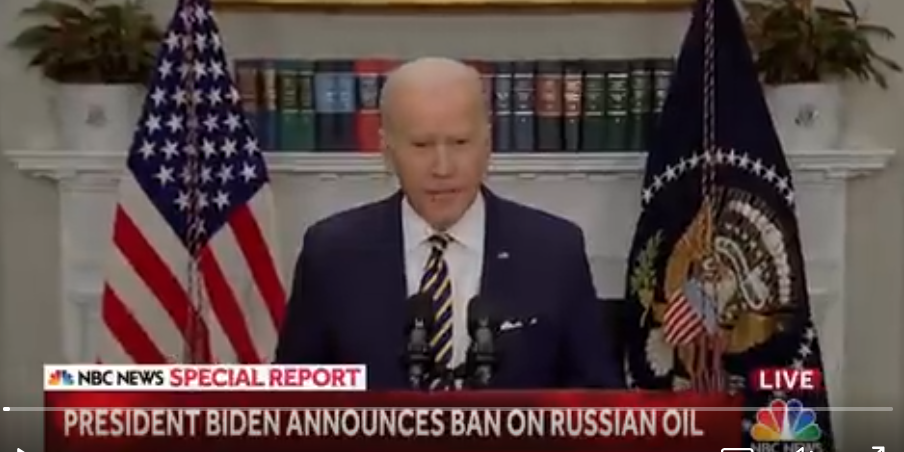 In war time, things seem to move at a different pace. The world has changed fundamentally over the last two weeks since Russia invaded Ukraine to unleash its bloody illegal war on an innocent population. Thousands have now been killed with some two million refugees having fled Ukraine.

The information overload of a twenty-four-hour news cycle is overwhelming for many. Even a day ago seems a long time. So what happened 10 days ago feels like a lifetime. And as we concentrate on one crisis it is easy to forget about another. But everything, as usual, is interlinked.

Ten days ago, the world’s climate scientists, the IPCC, released their latest assessment of the science of climate change. It made for grim reading. As António Guterres, the UN Secretary-General, said: “I have seen many scientific reports in my time, but nothing like this. Today’s IPCC report is an atlas of human suffering and a damning indictment of failed climate leadership.”

“Nearly half of humanity is living in the danger zone – now”, said Guterres, “Many ecosystems are at the point of no return – now.”

“Instead of slowing down the decarbonization of the global economy, now is the time to accelerate the energy transition to a renewable energy future,” said Guterres.

His message was simple and clear: “Fossil fuels are a dead end – for our planet, for humanity, and yes, for economies.”

The Secretary General attacked world leaders for their inaction: ”This abdication of leadership is criminal”, he said “The world’s biggest polluters are guilty of arson of our only home.”

Much has changed over those ten days. As the brutal war intensifies, Russia is now threatening to cut off gas supplies to Europe. In turn, Europe and the US are scrambling to reduce their dependence on Russian gas.

But some politicians are grasping at the wrong solution to the crisis. This week, the British Prime Minister, Boris Johnson, said in a press conference the UK may have to increase its domestic gas and oil production in order to reduce its dependency on Russian oil and gas.

Johnson said he was looking at increasing North Sea output, trying to justify the move by saying: “That doesn’t mean we are abandoning our commitment to reducing CO2 … We have got to reflect the reality that there is a crunch on at the moment. We need to intensify our self-reliance as a transition with more hydrocarbons.”

This is a very useful primer for why the so-called "treasure under our feet" is actually fool's gold.

– There's much less of it than proponents are claiming
– Most of it is oil, most of which is exported, not consumed in the UK
– It takes a long time (decades) to start producing https://t.co/K6zg5PySH8

Our colleagues at Uplift UK, who campaign against the expansion of the North Sea, also issued a briefing which outlined that there are numerous practical reasons why expanding UK oil and gas exploration and production will NOT provide the UK with a secure supply of affordable energy. More than this, continued North Sea expansion is acting as a brake on the UK’s future ambitions for a cheaper, cleaner and more secure energy system.

Uplift pointed out some crucial facts and figures that show that expanding oil and gas exploration is the wrong solution to the problem. The geology of the North Sea means that, after decades of production, 70% of what’s left is oil not gas, which is not used in UK refineries. This means the UK exports 80% of it.

Moreover, it takes on average 28 years to go from discovering a new field to getting any oil or gas out of the ground. And even then, UK reserves would only provide about 1% of European gas demand each year to 2050. But even then it will be sold to the highest bidder, probably abroad. Finally, of course it ignores the climate crisis and comments such as those from the UN Secretary General that: “Fossil fuels are a dead end – for our planet, for humanity, and yes, for economies.”

On Tuesday, The UK Energy Secretary, Kwasi Kwarteng, said that the country – which imports four per cent of its gas from Russia, will phase out imports of Russian oil by the end of 2022.  Kwarteng added that “while the UK is not dependent on Russian natural gas – 4% of our supply – I am exploring options to end this altogether”.

The UK’s move follows a similar announcement from Joe Biden in the US yesterday. Biden said he was punishing Russia for a “vicious war of choice” in Ukraine by banning importation of the country’s oil, gas, and coal. He added that the decision would likely lead to a “Putin price hike” at the gas pump.

This decision today is not without costs here at home. Putin’s war is already hurting American families at the pump — and this will drive up costs further.

So, I will take every step we can to minimize Putin’s price hike here at home.

The solution to both the US and UK decisions is not to drill for more oil, either in the US or UK – something the fossil fuel industry and its supporters are already arguing. It is to invest in renewables and alternatives such as heat pumps and weatherization, just as António Guterres said we should be doing those ten long days ago.

My colleague Laurie and others were quick to point out on Twitter too:

Biden has just given a strong defence of the urgent need to switch to clean energy, both to fight climate change and to deprive tyrants like Putin of their fossil fuel income https://t.co/UlA3ULO4qF

Others have solutions too:

Banning Russian oil and gas is 100% the right move, shouldn't even be a question, and should have happened day of the invasion. It should be accompanied by energy credits for low-wage households. We need a way to ramp down fossil fuels equitably anyway, may as well start now.

And also warnings of false narratives:

1) We should try to end fossil fuels.
2) Ending fossil fuels will probably be impossible for X or Y reasons.
3) So we should, perhaps, keep fossil fuels around and use CDR and geoengineering to sustain a fossil-fuel heavy version of net zero?