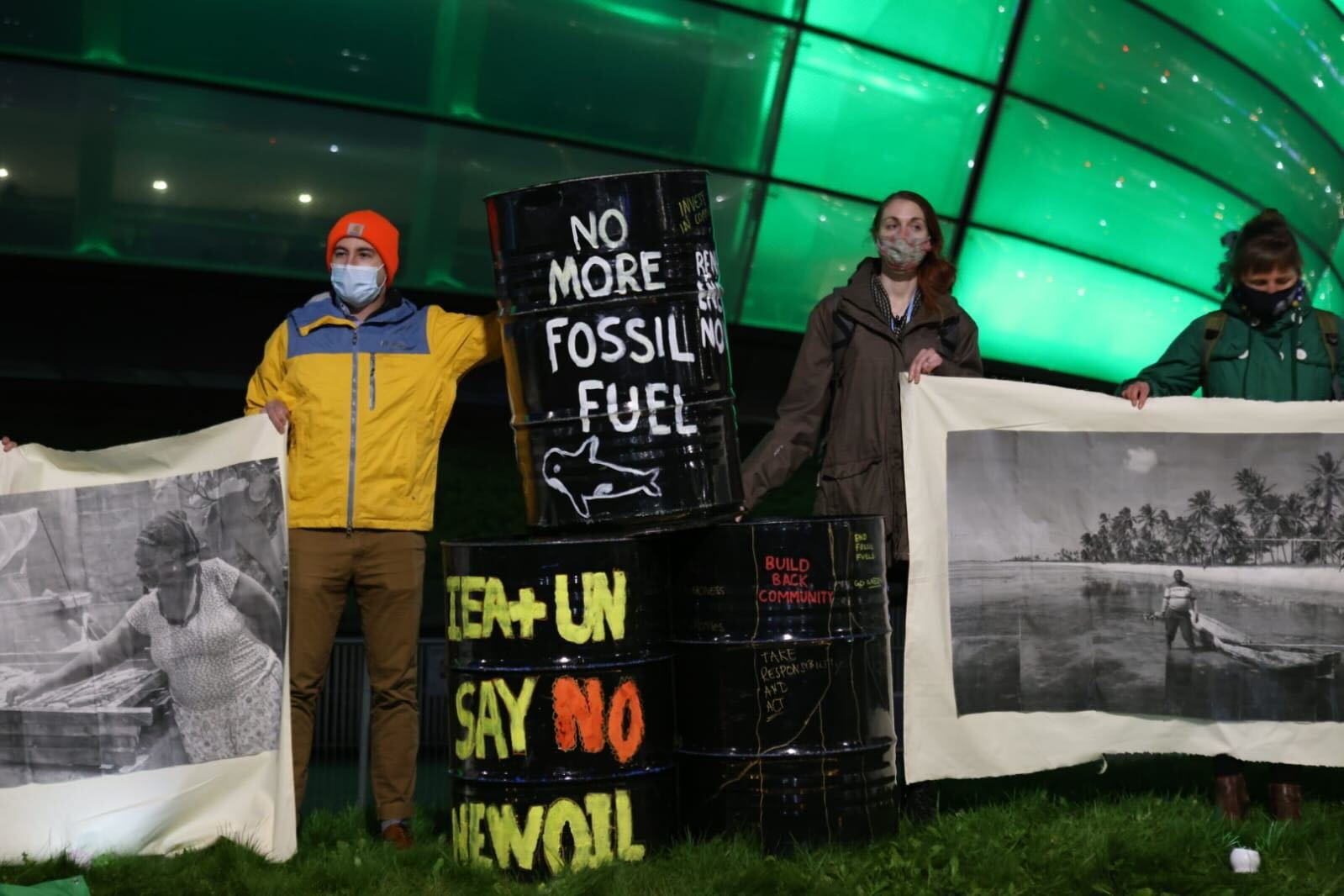 GLASGOW — As the COP26 climate talks end in Scotland, Global Gas & Oil Network members react to the outcomes of the Glasgow Climate Pact:

“Compared to just a few years ago, the progress and momentum made in the last two weeks towards phasing out fossil fuels is striking. The joint commitment by nearly 40 countries and institutions to end public finance for oil, gas, and coal projects overseas now puts pressure on all countries to end funding for all fossil fuels. The Beyond Oil and Gas Alliance, launched by 12 countries and regions, is the first diplomatic initiative acknowledging the need for governments to manage the phase-out of fossil fuel production as a key tool to address the climate crisis.

“It is notable that most progress during COP26 occurred outside the negotiating rooms. As the negotiations continue to fail to deliver just outcomes for people most affected by climate change, governments in the Global North must act first and fastest to address climate injustice, put an end to fossil fuel production, and support a just transition to clean energy.”

“Consistently the missing piece at these talks has come down to countries’ reluctance to say the ‘F words’: fossil fuels. After 30 years, governments finally had the guts to talk openly about the problem of fossil fuel dependence at COP26, but failed to encode a bold solution in their final outcomes. Future COPs will have to build on the small steps taken in the Glasgow agreements, and the new face of climate leadership represented by the Beyond Oil and Gas Alliance, to go beyond tepid language that ultimately serves fossil fuel interests.

“Once a year the multilateral order holds up a mirror to every global government and reflects the often uncomfortable truth of their action on climate change back to their people and to the world. The final outcomes of COP26 give us a clear image of where we’re at: united in the desperate hope to limit warming to 1.5°C and avoid the most irreversible impacts of climate change; divided on the scale of effort and balance of measures required to achieve that goal.

“Keeping the hope of 1.5ºC alive requires collective action to drive a just and equitable transition to renewable energy and phase-out the production, combustion, and subsidization of coal, oil and gas as soon as possible. Fortunately, that global energy shift is underway and won’t be stopped by what is or isn’t said here, nor will the determination of people and communities holding fast on the frontlines of the fight for climate justice.”

“More than 30 years after climate negotiations began, Parties to the UNFCCC finally found the courage to name the fossil fuels that drive the climate crisis, but not the courage to confront them — proving yet again that the fossil fuel industry’s declining prospects in the broader world haven’t weakened its stranglehold on COP26. A full day after the talks were set to end, the Parties have agreed an outcome that embraces false solutions, offers tepid half-measures on coal and subsidies, then distorts the meaning of just transition to weaken even those half measures further.

“The result is a global climate agreement increasingly and dangerously out of step with climate science and with a global energy transition that is rapidly — and necessarily — accelerating. The UK Presidency’s failure to deliver real results on fossil fuels will not stop that transition, but it is nothing to be celebrated. As Greta would say: ‘Blah, Blah, Blah.’”

“COP26 has produced a text that will entrench the inequalities of colonialism and deepen climate change violence to Mother Earth and nature. The outcome of COP26 locks us into another decade of false solutions intensifying the climate emergency by expanding carbon markets and finance programs allowing historical polluters to ramp up global fossil fuel production. The consequences are dire and will impact the survival of Indigenous Peoples and frontline communities, while doing nothing to reduce global greenhouse gas emissions. Many communities around the world do not have time.”

“COP26 has been deemed to be the most exclusionary COP ever, yet we made our voices heard. We, the civil society, together with our negotiators from the Pacific islands and other vulnerable States, held the line inside the negotiations. Fossil fuel lobbies, and the lack of leadership from the historic polluters, are the main reasons why we are not yet seeing the billions we need to adapt to climate change — nor funds needed to pay for what’s lost.

“At COP26, Canada agreed to raise climate targets in line with 1.5ºC by the end of 2022. To the Government of Canada, we say: We will hold you to this promise, because true climate action goes beyond press releases and happens at home. We will be watching to ensure Canada finally delivers on cutting emissions and stopping its addiction expanxion of fossil fuels, while prioritizing Indigenous Peoples’ rights and a just transition for workers and communities. We will be watching to ensure that Canada doesn’t rely on weak offsetting mechanisms at the expense of communities around the world, or cave in to the interests of those who came to COP to delay action, create loopholes, and compromise our future. We leave Glasgow with renewed conviction that we must fight back against every fraction of a degree, to protect the people and the places we love.”

“It’s clear by the weak language in the negotiations summary that the hand of fossil fuel interests interfered with the text. While there is a recognition of the need to transition equitably to renewable energy, it’s imperative that we talk about what we are transitioning away from which is the source of the climate crisis fuelling impacts — oil, gas and coal.”

“These COP talks have brought clarity if nothing else: the leaders of rich countries are still bent on driving us down a disastrous path. We know that if we want to keep 1.5 alive and maintain a liveable planet, there can be no new fossil fuel developments anywhere, yet this agreement makes no mention of the need to stop new oil and gas — very convenient for the UK government and its plans to keep opening up new oil and gas fields at home.

“The UN chief, António Guterres, said yesterday: ‘If things do not go well, prepare for the next fight.’ This is the next fight. In the absence of political leadership, it’s now up to all of us to oppose every new oil and gas development, whether that’s the Cambo oil field in the North Sea or the East African Crude Oil Pipeline in Uganda. This is how we keep 1.5ºC alive, by keeping fossil fuels in the ground. We need people to join this fight.”

“It is inevitable that fossil fuels will be phased out. The world’s nations know it, even major fossil fuel producers like Canada. However, at COP26 too many nations favoured the short-term profits of coal, oil, and gas companies over securing a healthy, safe future for the world’s people. It will not change the fact that the energy transition will happen. But tragically, millions more people and their communities are put at risk because of perverse priorities and a lack of courage.”

“Shockingly, COP26 is the first time that fossil fuels have been mentioned in the text of the global climate negotiations. That shows the tide is turning against the oil, gas and coal companies that knowingly caused the climate crisis and blocked solutions. But our leaders, especially President Biden, must move faster to replace oil, gas and coal with renewable energy. There’s no way to avert climate catastrophe and reach climate justice without limiting its root cause, which is fossil fuels.”

“The prospect of an oil and gas phase-out gives me the most hope. However, on the current emissions pathway, we are accelerating towards a disorderly transition which will create misery for hundreds of millions — especially in the Global South. Dangerous climate change also threatens our financial stability, our livelihoods and the fabric of our societies. Over $1 trillion of investors’ money in new unneeded high-cost projects is already threatened in the short-term if they are not canceled in line with the 1.5ºC Paris climate target. Trillions more in infrastructure investments are at risk of stranding if we fail to change course in time.

“Recent IEA and UNEP reports make it clear that, to keep 1.5ºC alive, there should be no new investment in oil and gas. Glasgow has been the launchpad for major new initiatives which can complement Paris: the Beyond and Oil and Gas Alliance, the Global Registry of Fossil Fuels, and the idea of a fossil fuel non-proliferation treaty to give an over-arching international framework to wind down carbon fuels. While the Glasgow agreement gives a let-out to unproven CCS technology, underpinned by language on fossil fuel subsidies, we could be at a tipping-point on oil and gas.”