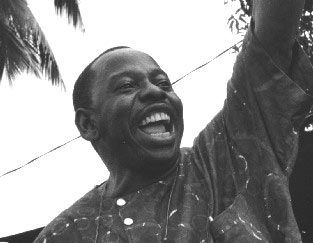 By Andy Rowell and James Marriott

It is now 26 years since the Ogoni Nine were murdered for their campaign for economic and social justice against the oil giant, Shell.

As myself, James Marriott and many others have been saying for decades, they were all hung by the Nigerian state on trumped up charges that were widely condemned at the time.

The world knew that they had been killed in order to silence a powerful campaign, of which Saro-Wiwa was the figurehead, that demanded justice for the ecological destruction of their homeland, Ogoni.

Even now, some twenty six years later, the intensity of the injustice keeps burning, the wound still bleeds. Justice is still not served.

As every year passes, some may find it easier to forget and move on. Again and again we’ve been inspired by the line from Milan Kundera: “The struggle of man against power is the struggle of memory against forgetting.”

To this end, Ogoni activists and Platform have endeavoured to mark each passing year and act in solidarity where possible. Over this vigil of the years,  they created works such as the Remember Saro Wiwa living memorial sculpture which toured England and is now incarcerated in Lagos, Nigeria.

This year of 2021, the anniversary of the murder of the Ogoni 9 falls within the COP 26 conference in Glasgow. This massive gathering is obsessively focused on the future with the repeated cry of ‘the future is our hands’. But whose futures, and the future of where?

The battle in Glasgow is to put a halt to the investment plans of the fossil fuel corporations. To use civil society pressure, sporadically expressed through state politicians, to stop the plans of a handful of private companies to drill for oil in the North Sea, the Niger Delta and elsewhere across the planet.

We have known for decades that the Niger Delta is under radical threat from climate change. The Delta is essentially a mighty fan of low-lying land, once essentially tropical rainforest, that faces the Gulf of Guinea. This is a place that faces a severe threat of sea level rise. The scale of the rise and the speed at which it does so is, of course, hard to predict. But the inequity of the impacts is clear.

A memorandum produced by the River Chiefs of the Niger Delta and presented at the Earth Summit in 1992 in Brazil, warned about sea-level rise from climate change as well as subsidence caused by oil and gas operations. Led by Chief Dappa-Biriye “the very existence of the indigenous people of the Niger Delta and adjoining coastal zone is seriously threatened by environmental degradation caused by petroleum industrial pollution”.

Due to petroleum pollution, this week Climate Action Tracker warned that the world faced 2.4 degrees warming. If that happened it would be catastrophic for the people of the Niger Delta – as it would other low-lying areas of the world.

Bill Hare, the chief executive of Climate Analytics, one of the organisations behind the Tracker, told the Guardian newspaper: “We are concerned that some countries are trying to portray [Cop26] as if the 1.5C limit is nearly in the bag. But it’s not, it’s very far from it, and they are downplaying the need to get short-term targets for 2030 in line with 1.5C.”

Ironically on the day after the Anniversary of when Ken and the others were murdered, at COP there will be the formal launch of the Beyond Oil and Gas Alliance, or BOGA for short. The initial idea of BOGA was announced back in September by the Governments of Costa Rica and Denmark.

BOGA is a world first. It is the first diplomatic initiative acknowledging the need for governments to manage the phase out of fossil fuel production as a key tool to address the climate crisis.

The Alliance’s members have committed to ending licensing rounds for new oil and gas exploration and production and are setting an end date for their production.

It has the potential to help reframe the global climate conversation to ensure phasing out fossil fuel production is seen as a key tenet of climate leadership.

The good news is that other countries and provinces have signed up and we will know the full list tomorrow. The bad news is that COP26 host, the UK, has rejected joining the Alliance.

So maybe BOGA is that memorial. The first international alliance to keep oil in the ground. We know Ken would approve. Tonight maybe finally there is an Ogoni star shining brightly in the sky.