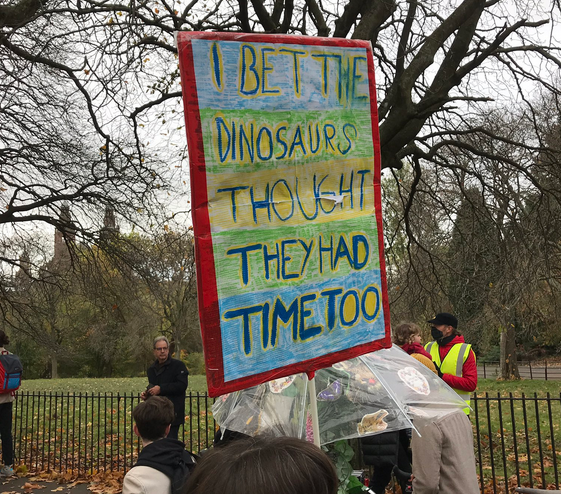 As I write, the youth climate movement is marching in Glasgow to demand an end to fossil fuels and to make their voices heard at COP26.

They have reason to still be angry. Despite the flurry of announcements on finance, and pledges to cut emissions, Selwin Hart, UN Special Adviser and Assistant Secretary-General for climate change, warned COP delegates that the fight to limit global heating was “far from over.”

Hart said, based on “Based on the NDCs [nationally determined contributions] that have been submitted, the world is on a 2.7 degree pathway, a catastrophic pathway, and therefore we are a long way away from keeping the 1.5 degree goal of the Paris agreement alive.”

As more pledges and promises come in, even if they are not nearly enough, one thing is certain: the world is finally speeding up its efforts to decarbonize as it tries to limit warming to 1.5 degrees.

For decades campaigners and scientists have warned that the oil industry faces a real problem – that its greatest assets – its reserves of oil and gas, will become worthless as the world transitions to clean energy. They will become what is now known as stranded assets.

These warnings have been said for years. Eight years ago I wrote: “The vast reserves of oil and gas held by major international companies such as BP and Shell are not assets — they are, in fact, liabilities. Their reserves are in effect un-burnable carbon.”

But rather than heed the warnings, the oil majors carried on searching for new oil and gas, spending billions in the process.

Insulated in their carbon bubble, the Big Oil executives must have believed that climate change could be ignored or action could have been delayed long enough by funding climate denial groups; that they would have long retired to the golf club before action would be needed.

But the calls for action kept coming. In 2015, then Governor of the Bank of England, Mark Carney warned about the risks of climate change — or as he called it — the “tragedy of the horizon.” Carney cautioned that “the vast majority of reserves” of oil, gas, and coal could become “stranded” and literally become “un-burnable.”

Last June, In an unexpected move, BP slashed up to USD 17.5 billion off the value of its assets after lowering its longer term price assumptions in the wake of COVID-19. In the words of the Financial Times, BP “expects” the pandemic “to hasten the shift away from fossil fuels.” Those assets had essentially become stranded. At the time, it was the biggest write-down the company has had to make since the Deepwater Horizon oil spill over a decade ago.

And now reality has finally caught up with Exxon too. The company’s decades of denial it coming back to haunt them.

It has not been a good month for Exxon. At the end of last month, Exxon and the other big oil executives were hauled before Congress to answer for their decades of climate denial.

They lied. Under oath.

And now the House committee is set to subpoena the bosses for documents on what company scientists have said about climate change.

But it gets worse. On Wednesday this week, Exxon finally belated realized it was in deep trouble. It warned investors that it may have to write down the value of its oil and gas assets because of climate change.

In a federal filing the company stated: “The Corporation views climate change risks as a global issue that requires collaboration among governments, private companies, consumers and other stakeholders to create meaningful solutions.”

But it went on to warn investors that if the world shifts away from fossil fuels more quickly than anticipated, the value of its oil and gas assets could fall, becoming stranded.

According to the Houston Chronicle, “Exxon appears to be taking climate risks more seriously as the oil industry faces mounting pressure from governments, corporations and the public to change course to avoid the worst consequences of climate change. The acknowledgment of climate risks comes after Exxon and its peers faced unprecedented challenges to oil’s supremacy over the past two years.”

This is huge. Exxon Mobil, the nation’s largest oil company, for the first time on Wednesday warned investors that it may have to write down the value of its oil and gas assets because of climate change. #COP26 https://t.co/RqjKjyQAjD via @houstonchron

And our colleagues at CarbonTracker:

Reality bites: Exxon Mobil on Wednesday said for the first time in a securities filing some of its #oil & #gas assets may face impairment due to climate change https://t.co/Ph8zbj49GK #StrandedAssets #COP26 #EnergyDay

But Exxon is not alone.

According to new research, published in the scientific journal Nature, about half of the world’s fossil fuel assets could be worthless by 2036 under a net-zero transition. This is billions of dollars of assets, potentially rendered worthless.

“Large quantities of fossil fuel reserves and resources are likely to become ‘unburnable’ or stranded if countries around the world implement climate policies effectively,” said Nature.

The lead author, Jean-Francois Mercure of the University of Exeter, told the Guardian, “in a worst-case scenario, people will keep investing in fossil fuels until suddenly the demand they expected does not materialize and they realize that what they own is worthless.”

As one banner on today’s march states, “I bet the dinosaurs thought they had time too.” Big Oil is out of time too — and its shareholders are going to lose billions in the next decade is they don’t divest now.