Our new report “Canada’s Big Oil Reality Check” finds that the climate plans of major oil and gas companies operating in Canada rank among the worst worldwide and will accelerate the climate crisis rather than help Canada and the world limit warming to 1.5 degrees Celsius (ºC).

The assessment by Environmental Defence Canada and Oil Change International assesses eight of Canada’s top oil and gas producers, including Imperial (ExxonMobil) and Shell. It finds they are all on track to increase their oil and gas production in Canada, rather than planning a fair transition away from fossil fuels that are fuelling the climate crisis.

The federal government has repeatedly told the public that Canada can be a climate leader while continuing to have a thriving oil and gas sector. In reality, Canadian oil and gas companies have released a range of complex, misleading climate change pledges that must not be taken at face value. This report provides a critical assessment of the climate plans of eight Canadian producers of oil, gas, or both: Cenovus, Suncor, Canadian Natural Resources Ltd (CNRL), Tourmaline Oil, ExxonMobil and its Canadian affiliate Imperial Oil (owned by ExxonMobil), ARC Resources, Shell Canada, and Ovintiv.

Despite all the talk from Canadian oil and gas companies about climate leadership, their current business plans would fuel further climate disaster and global injustice. To 2030, Canadian producers are on track to expand annual oil and gas production in Canada by nearly 30% above 2020 levels, resulting in a 25% increase in associated annual carbon emissions. The research makes it clear that in order to reach our national climate targets, governments need to step in to manage the decline in fossil fuel production, in Canada and worldwide. Previous research by Oil Change International shows:

Climate Action Tracker has evaluated Canada’s overall approach to climate action as “highly insufficient,” consistent with up to 4°C warming. And Canada’s largest oil and gas lobby — the Canadian Association of Petroleum Producers (CAPP) — is pushing for even worse. This report uses a ten-point framework drawn from the 2020 Big Oil Reality Check analysis for assessing whether oil and gas companies’ climate change pledges align with minimum criteria for limiting warming to 1.5°C. The ten criteria are:

Applying these criteria results in an abysmal showing for Canadian oil and gas: 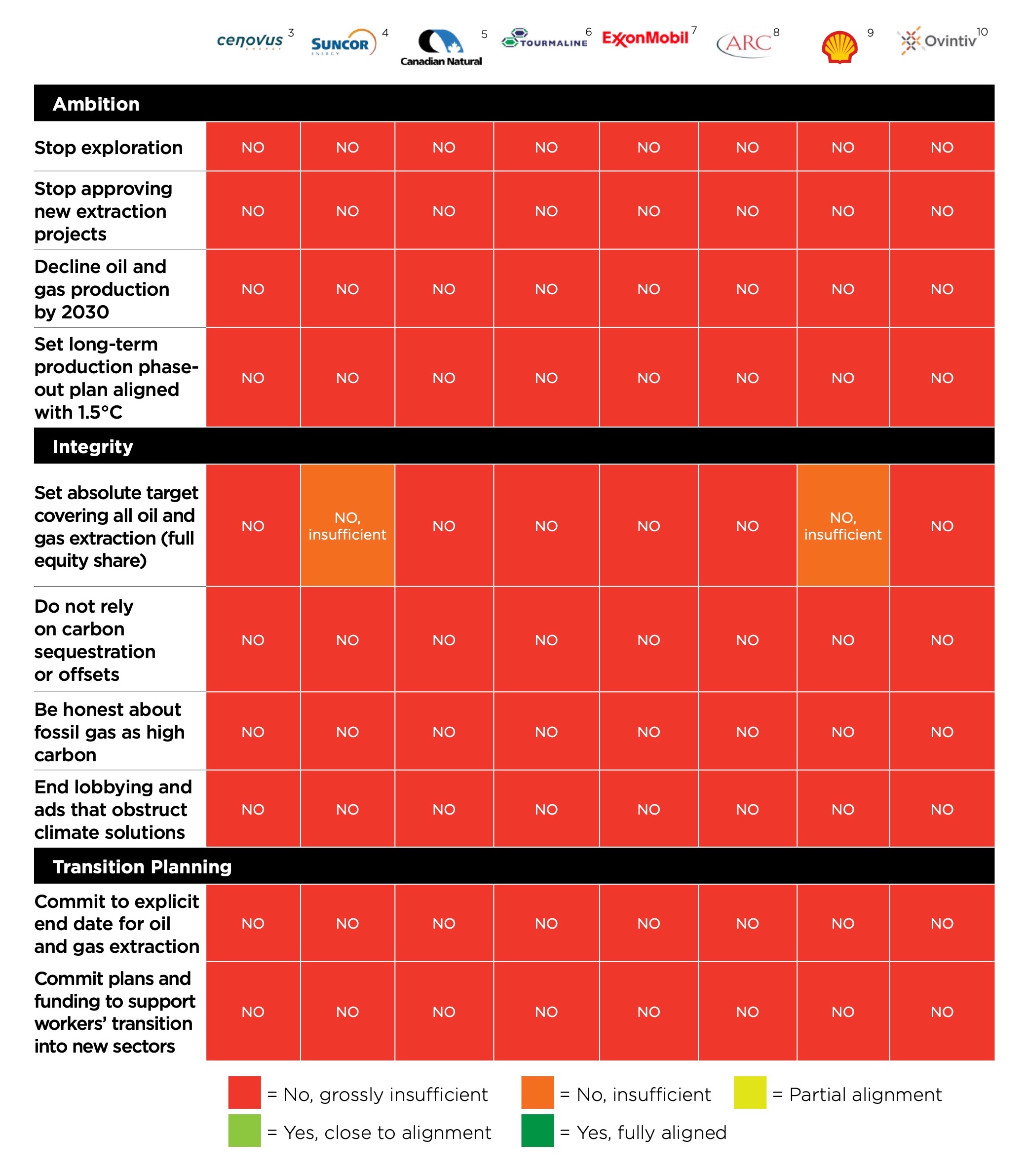 The science shows that the next decade is the critical window to turn things around in a significant way. Catastrophic impacts will occur if these warnings are ignored. Despite that, no oil and gas company operating in Canada has developed a climate change plan that proposes the bare minimum for addressing this climate emergency.

The response from oil and gas companies has been to develop plans to continue investing in new projects and new fields. The industry wants to expand production so considerably that both production of and emissions from oil and gas would be significantly higher in 2030 than today. It is a callous and reckless response to dire warnings from the world’s climate change experts. So if oil and gas companies do not want to meaningfully address the climate emergency by rapidly rethinking their extraction-based business model, governments must: