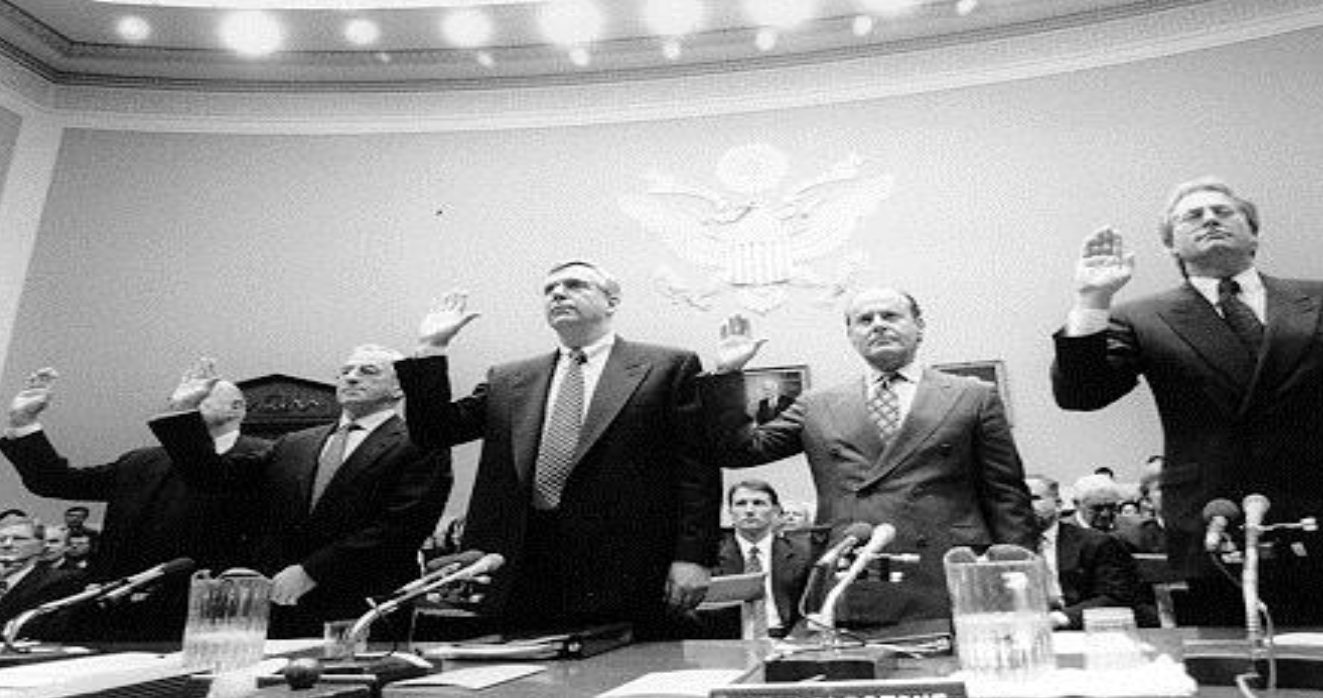 It is not often that some of the most powerful bosses are collectively hauled before Congress to answer for their crimes.

And when it does happen, it is time for the politicians to forensically grill their guests for their decades of deception.

We have been here before of course. With Big Tobacco.

In 1994, when the bosses of Big Tobacco testified before Congress, one by one they lied about how nicotine was not addictive. They lied to the American people. They perjured themselves in the name of profit. They showed utter contempt for Congress and the truth.

If you have never seen the footage of the bosses lying, it is worth watching as it remains one of the most damning examples of corporate deception.

Two years after they all testified, the bosses were all under federal investigation for lying. Their deception paved the way for the so-called Master Settlement, which required the industry to pay a massive $206 billion over the next 25 years.

Today it is the turn of Big Oil, whose bosses will appear before Congress to answer for their decades long climate denial campaign. It is the first time that collectively the bosses of Exxon, BP America, Chevron, and Shell have all testified together under oath.

However the CEOs have also opted to testify by video rather than in person. Also testifying will be the vanguards of spin, the American Petroleum Institute, as well as the boss of the US Chamber of Commerce, who despite being based in Washington, have also opted to appear by video link.

Together, they are being labelled the “slippery six” by critics.

Many commentators, from politicians to journalists and scientists, are making the connection between the two Congressional hearings. Big tobacco lied, so what will Big Oil do?

House Democrats compare the inquiry with the tobacco hearings of the 1990s, which brought into sharp relief how tobacco companies had lied about the health dangers of smoking. https://t.co/aiIcS4X62Y

The hearings are being held by the House oversight committee. A leading member of the committee, and industry critic, Representative Ro Khanna (D-Cal), has been speaking to the press before the event.

Khanna told the New York Times: “For the first time in American history, Big Oil is going to have to answer to the American public on their climate disinformation.”

Adding to the Guardian: “It could be the big tobacco moment. We’ve never had a situation where the big oil executives have to answer under oath for their company’s behaviour.”

“The evidence is so incontrovertible that they’re going to really have a strong choice” Khanna told the E& E Daily: “Do they risk coming close to the line, to committing perjury, and go the way of the tobacco executives? Or do they do a full mea culpa and admit all of the wrongdoing and commit to change?”

As one opinion piece in the LA Times states: “Members of Congress should force the CEOs to make a choice: Admit to their companies’ lies and risk further exposing themselves to legal scrutiny, or lie about past lies on climate science — a path in line with Big Tobacco’s undoing.”

Ironically, the hearings are happening on the eve of COP26, seen as the most important climate meeting in years.

The hearing comes amongst the cacophony of warnings of the perilous state of our climate and our collective inaction.

Three days ago, the World Meteorological Organization warned that levels of carbon dioxide in the atmosphere hit record levels in 2020. Levels of CO2 are now fifty percent higher than before the Industrial Revolution.

One concludes that the world is failing to make changes needed to avoid climate breakdown.

The other, published by OCI and Friends of the Earth US, reveals that, despite our climate emergency, nonsensically, the G20 governments have bankrolled more than $188 Billion in fossil fuels since 2018.

It is worth pausing for a moment. The world’s experts are warning that we face runaway catastrophic climate change caused by the burning of fossil fuels, and yet our governments continue to pour money into fossil fuels.

We have known for decades we needed to act but we have not. And one of the main reasons is Big Oil’s decades long campaign of climate denial, their denial of the evidence and their systematic campaign to delay action. We face a climate emergency because of the companies that will today testify.

And so it is judgement day. Will Big Oil finally be held to account? Will they be forced to finally tell the truth…