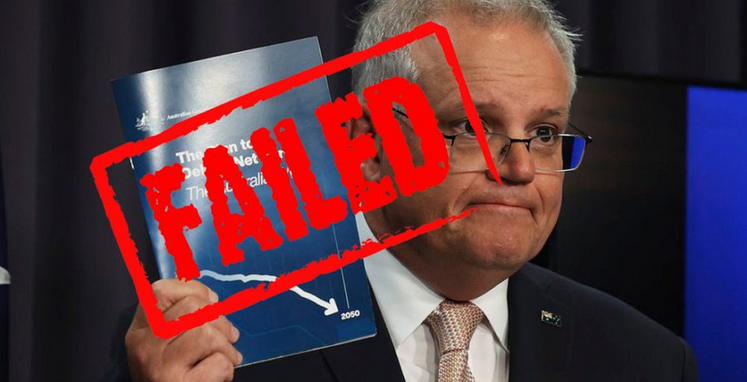 For years now, the Australian Government led by climate denier Scott Morrison, has been seen as a climate laggard, one still deeply addicted to dirty fossil fuels and an outlier when it came to concerted international action on climate.

Let’s not forget that the Government is led by the same Scott Morrison who, when Treasurer of Australia, brought a lump of coal into the House of Representatives supplied by the Minerals Council of Australia.

“This is coal,” he told his bemused fellow parliamentarians. “Don’t be afraid. Don’t be scared.”

Australians have long had reason to be fearful of Morrison’s die-hard climate denial. No more so than early last year when wild-fires ripped through the country in scenes reminiscent of an apocalyptical movie:

In response to the fires, where dozens of people were killed, over 500 million animals incinerated, fifteen million acres of forest destroyed, and with a cost to the economy of AUD $5 billion, Morrison signaled that he would carry on drilling with “unprecedented fossil fuel growth.”

So here comes the small bit of good news. Morrison is attending the crucial climate meeting in Glasgow. And with COP26 just days away now, the Australian Prime Minister has published his government’s long awaited plan to reach net zero by 2050.

Speaking earlier today, Morrison hailed the plan as a “practical way” forward for Australia, whose emissions are amongst the highest per capita in the world.

But almost immediately the plan was dismissed for being vague, voluntary, and vacuous, nothing more than PR puff full of false solutions.

As one newspaper columnist pointed out, Australia already adopted the net zero objective by signing the Paris agreement five years ago and the “plan” is actually nothing more than the “status quo with some new speculative graphs.”

The Guardian reported that almost a third of the carbon dioxide cuts are via unspecified “technology breakthroughs” and “global trends” while a further 20% will be achieved through unexplained offsets. The overall budget is a paltry $20 billion.

CNN criticized the Morrison’s plan as “the weakest climate plan among the G20’s developed nations.”

Moreover, flawed carbon, capture, and storage is also central to the plan, despite five decades of costly failing to deliver, especially in Australia.

CCS has been ten years away from being commercial for the last 20 years. https://t.co/PIjP20eJ9E

The opposition leader Anthony Albanese, dismissed the plan as “nothing new.” Additionally, the opposition Labor Party’s shadow minister for climate, Chris Bowen, described the government’s announcement as a “scam.”

350 Australia called Morrison’s net zero commitment too “little, too late” and called for a plan to transition to 100% renewable energy by 2030 rather than 2050. 350 Australia also slammed the continued expansion of the coal and gas industries, and the fact that Morrison had released no additional policies to cut emissions.

350 Australia CEO Lucy Manne said, “This is the climate policy equivalent of showing up late to a party, refusing to bring what the host asked you to, and then trying to ruin the party for everyone.”

Manne added: “The Morrison Government’s belated and begrudging commitment to net zero by 2050 is meaningless while the Government pours billions of dollars of public money into expanding fossil fuels and promoting false solutions like offsets, and failed carbon capture and storage (CCS) technology.”

Others were equally dismissive about the plan and reliance on false solutions such as CCS.

Blair Palese, the Climate Editor for Climate and Capital Media website told OCI, “The Prime Minister of Australia sold his soul to the Conservative National party and the world’s climate along with it. He has a net zero by 2050 plan in name only, with no intention of doing anything to reduce emissions, stop coal & gas exports or do anything but PR spin his way through the climate crisis.”

Palese added: “The world should be ready to take Australia on on our climate inaction because we deserve nothing but contempt.”

According to Morrison we’re getting to net zero with no changes to mining , industry, exports or agriculture and we’re going to be $2000 per year better off . The answer lies in a glossy pamphlet that will be waved about. Coming up next on Ripley’s Believe it or not . #auspol

Carbon capture and storage (CCS) is not a viable climate solution – it’s a licence to pollute. When paired with coal and gas, CCS is simply an attempt to prolong the life of polluting fossil fuels in our energy system. #auspol #COP26 https://t.co/utWcWNYNiY