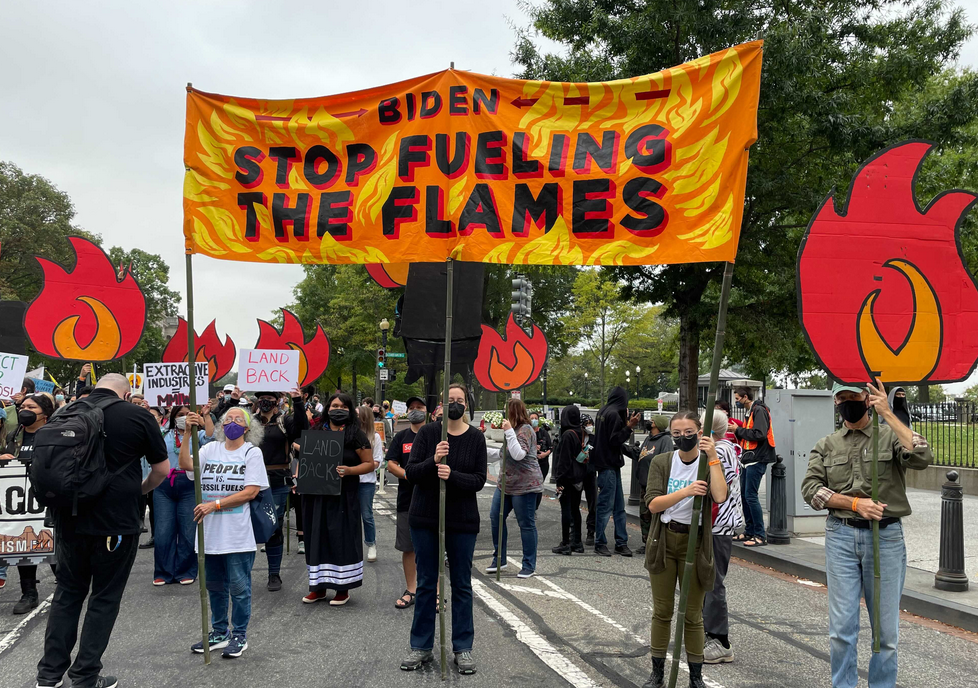 As I write, hundreds of Indigenous, environmental, and community activists are risking arrest as a part of the People vs Fossil Fuels week of action in Washington, D.C.

One of them is the Executive Director of Oil Change International, Elizabeth Bast.

If Biden does not want to listen to those outside the White House, maybe he will listen to the World Health Organization, which published a Special Report on Climate Change and Health yesterday, too. The UN agency did not mince its words, which are meant to galvanize action at COP26, now only weeks away.

WHO describes climate change as the “single biggest health threat facing humanity,” and calls on governments and policymakers to “act with urgency” on the climate and health crises.

The WHO report states, “the burning of fossil fuels is killing us. Climate change is the single biggest health threat facing humanity. While no one is safe from the health impacts of climate change, they are disproportionately felt by the most vulnerable and disadvantaged.”

WHO’s call came as an open letter signed by more than 400 health and medical organizations from around the world also urged governments to step up climate action.

“Wherever we deliver care, in our hospitals, clinics, and communities around the world, we are already responding to the health harms caused by climate change,” the letter says.

“As health professionals and health workers, we recognize our ethical obligation to speak out about this rapidly growing crisis that could be far more catastrophic and enduring than the Covid-19 pandemic,” the letter read.

The letter, published in the British Medical Journal, added, “those people and nations who have benefited most from the activities that caused the climate crisis, especially fossil fuel extraction and use, have a great responsibility to do everything possible to help those who are now most at risk.”

WHO called on governments to set ambitious national climate commitments if they want to sustain a healthy and green recovery from the COVID-19 pandemic. It included ten key recommendations including prioritizing climate interventions with the largest gains, building climate-resilient and environmentally sustainable health systems, and promoting sustainable food production as well as sustainable and equitable urban design and transportation systems.

“The COVID-19 pandemic has shone a light on the intimate and delicate links between humans, animals and our environment,” said Dr Tedros Adhanom Ghebreyesus, WHO Director-General. “The same unsustainable choices that are killing our planet are killing people.”

WHO is calling on all countries to commit to decisive action at COP26 to limit global warming to 1.5°C and said that achieving the goals of the Paris Agreement would save millions of lives every year due to improvements in air quality, diet, and physical activity, among other benefits.

This year has already lurched from one extreme weather event to another, from fires to floods. But if Biden or any other politician needed any other evidence of the need to act, all he has to do is look at the news coming out of China.

Nearly two million people have been affected by severe flooding in the northern Shanxi province. Some 120,000 people are displaced. Some 20,000 homes have collapsed. And some thirty people have been killed. Mr. Biden, it is time to declare a climate emergency.

Floods in northern China have displaced 1.75 million people after 3 months of rain fell in 5 days.

Over 120,000 people have been evacuated from Shanxi, which is normally a dry region. Floods have destroyed over 17,000 buildings and decimated almost 500,000 acres of crops. pic.twitter.com/9mizE4JSiy