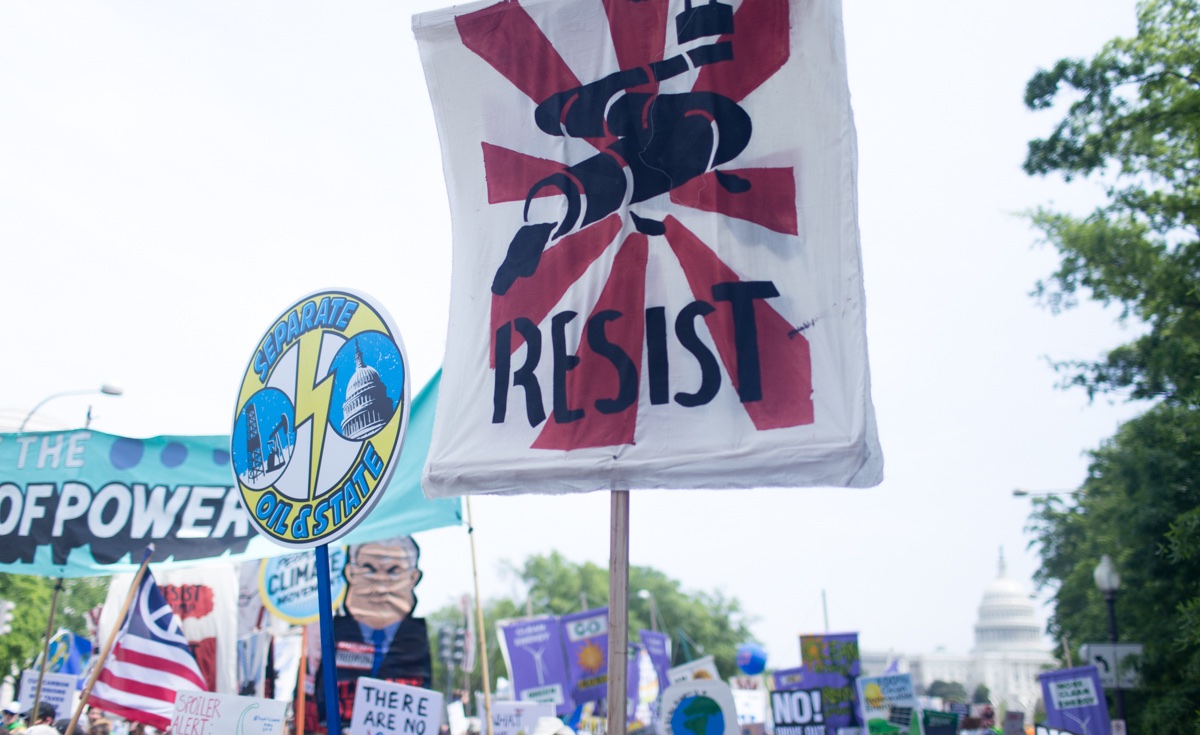 Today I’m risking arrest as a part of the People vs Fossil Fuels week of action in Washington, D.C. The climate emergency is here and we know fossil fuels are the cause.

This year, even the International Energy Agency — a historically conservative energy forecasting institution — has said that no new oil, gas, and coal extraction projects should be approved under a pathway that would hold global warming to 1.5ºC, confirming what advocates and activists have been saying for years. We expect the IEA’s World Energy Outlook, which will be released tomorrow, to incorporate this scenario.

It’s now up to President Biden to do what has long been obvious to those following the science: end all support for fossil fuels and actively work towards a just transition.

In addition to climate impacts, the acts of extracting, transporting, and burning fossil fuels have devastating impacts on people and the environment, contaminating the water, land, and air. This direct harm and the systemic and ongoing violations of human rights and Indigenous sovereignty from fossil fuel production should have been enough to change course on energy production decades ago.

From the Ogoni 9, who were hanged in 1995 for demanding their environmental and human rights while fighting oil development in the Niger Delta, to Amazonian Indigenous communities who have been struggling against oil drilling in Peru and Ecuador for decades, to the water protectors at Standing Rock fighting the Dakota Access Pipeline, to the tribal nations and Indigenous people working to stop Line 3 in Minnesota and beyond, Indigenous peoples have been putting their lives on the line for years to protect their lands and water.

There are countless examples of aggression by oil companies and responses of Indigenous and frontline communities making incredible sacrifices to defend their land, air, and water in the face of fossil fuel development. How many more stories of bravery and resistance to human rights violations do we need before we stop this exploitation once and for all?

“We are asking you to stand with us. As representatives of communities who have carried the brunt of the harm from fossil fuels for generations, we ask you to join us in solidarity…If we all come together, put our bodies on the line in the name of climate justice, we may be able to change the course of history.”

President Biden made some important promises about confronting the climate crisis and stopping fossil fuel projects, but so far the tangible actions taken are not enough. Time is running out — he has the political power to act and he must do so now, before it’s too late.

The urgency of acting on climate change has never been more obvious. The incredible heat wave in North America this June was a 1,000-year weather event. And then the fires came — again — blanketing the U.S. and Canadian west in smoke, burning millions of acres, threatening towns and burning thousand year old trees. Wind gusts, record flooding, and tornadoes from Hurricane Ida and its aftermath left more than 80 dead on the east coast of the U.S. And that’s just a snippet from North America.

Across the world, similar events are now regularly occurring — and in countries and regions with fewer resources, the impacts are even more devastating. In Africa, floods, locusts, and drought made worse by climate change are contributing to food insecurity, population displacement, and stress on water resources. Asia accounts for nearly one third of weather, climate, and water-related disasters and associated economic losses globally — and for nearly half of all deaths.

It’s not that these climate change impacts are a surprise. I started working on energy and climate change two decades ago, and as long as I have been working on these issues, scientists have been predicting more extreme weather events. It’s clear that we are living now what was predicted as much as 40 years ago.

But it’s still devastating to experience it in real time. And it’s enraging to see the fossil fuel industry profiting from delay and denial.

Scientists tell us that we still have a few years to act — but only a few — to get off fossil fuels and to start on a just transition to clean energy.

And yet the fossil fuel industry is planning massive expansion of oil and gas and building major infrastructure projects. The Permian Basin in Texas and New Mexico is still slated for major jumps in production. And in Africa and Asia we’re actively working with partners to push back against the buildout of more oil and gas infrastructure.

The People vs. Fossil Fuels week of action is needed now more than ever, and it’s time that all of us who care about climate change, environmental destruction, inequality, and injustice stand in support of Indigenous leaders demanding an end to fossil fuel extraction and the declaration of a climate emergency.

The United States needs to act early and decisively in order to set the stage for action around the world and avoid the worst impacts of climate change in even more vulnerable countries.

This is why I’m joining the actions and risking arrest this week. I’ll be joining together with Indigenous and frontline partners and allies to demand that President Biden follow through on his promises and put an end to fossil fuel expansion, once and for all.