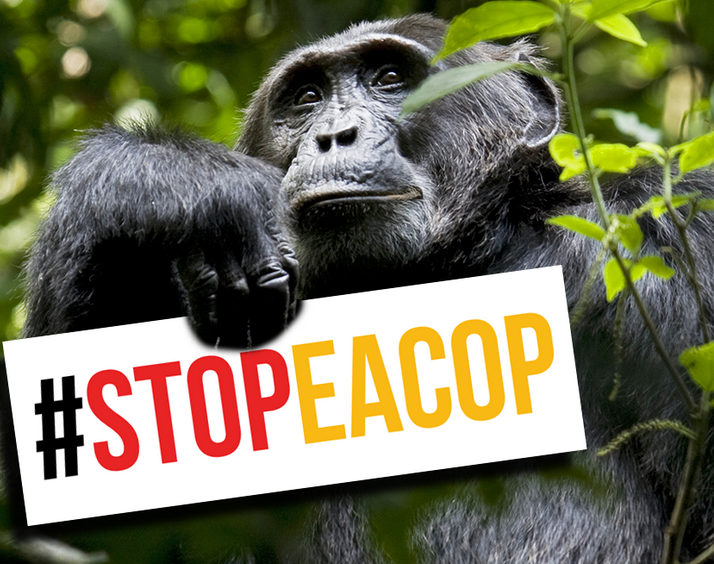 So the famous eco-pranksters the Yes Men, have struck again. Earlier this week, in a plush Parisian ballroom full of press, supposed representatives from Total Energies unveiled what they called “RéHabitat” — a pioneering conservation program.

The idea of “RéHabitat” is that it would rescue animals from their home which was soon to be bulldozed by the impending East African Crude Oil Pipeline (EACOP) by relocating them to “more sustainable” habitats in France.

To demonstrate how it worked, handlers introduced a French rooster to a hornbill, which the audience was told had been recently relocated from East Africa. In a spoof that horrified the onlooking journalists the rooster attacked and “killed” the African bird. The whole event, which was a set-up using puppets, was live-streamed around the world.

The YesMen have a habit of using pranks and humor to expose the deadly serious. We know we have to stop drilling and building fossil fuel infrastructure, but still the oil industry carries on.

For example, the world’s energy watchdog, the International Energy Agency (IEA), recently acknowledged that to limit warming to 1.5 degrees Celsius (ºC) and avoid the worst of the climate crisis, we must cease all new investment in the expansion of oil, gas, and coal.

The world’s leading scientists, the IPCC, also recently issued a “code red” for humanity and said that we must stop investing in fossil fuels.

One of the projects that will cause huge impacts on climate change as well as the local ecology is the EACOP, which was the subject of the Yes Men’s prank. EACOP is a proposed 1,445-kilometer pipeline that will transport oil from Uganda to Tanzania.

If it is constructed, it could transport up to 1.7 billion barrels of recoverable oil which has been discovered on the border between Uganda and the Democratic Republic of the Congo.

The Yes Men are not the only ones concerned. Last month, writing in the Guardian, Bill McKibben, the founder of 350.org; Diana Nabiruma from the Africa Institute for Energy Governance, and Omar Elmawi, the coordinator of the #StopEACOP campaign, said: “Let’s heed the UN’s dire warning and stop the east African oil pipeline now.”

They added that “one of the first tests of whether anyone is paying attention” to the IPCC report is that “if somebody rips up the plans” for EACOP, which will be the world’s longest heated crude oil pipeline.

Others are worried too. As Banktrack have noted about the project: “Both the extraction sites and the EACOP pose serious environmental and social risks to protected wildlife areas, water sources and communities throughout Uganda and Tanzania. As such, the project is facing significant local community and civil society resistance.”

And then there is the carbon cost: The pipeline is set to carry over 200,000 barrels of oil a day. The Environmental Law Alliance Worldwide-USA (ELAW-USA) estimates that burning this will produce more than 34 million tons of carbon a year. Or put another way – greater than the current combined emissions of Uganda and Tanzania.

It is no surprise then that Banktrack and others have been pressuring banks not to find the pipeline. There is even a petition website.

And they are getting some success. Yesterday, Banktrack noted that the pipeline “is coming under further pressure as more banks make clear that they are not taking part in a $3 billion loan to enable the project to proceed.”

HSBC, Mizuho, and the United Overseas Bank have all now confirmed they are now not supporting the project after external pressure.

Their recent statements bring the total number of banks that have distanced themselves from the project to 11, including ANZ, Barclays, BNP Paribas, Crédit Agricole, Credit Suisse, Royal Bank of Canada, Société Générale and UniCredit.

With more Banks agreeing to #StopEACOP, the message is clear:

Investing in this pipeline & its associated projects is madness. It will only benefit the oil barons as citizens of Ug & Tz pay the price.

Join us in thanking these Banks

But there is also a worrying development, too. According to Banktrack, the Ugandan Government is attempting “to suspend the work of over 50 Ugandan non-governmental organizations, including groups working to defend the rights of people affected by the oil pipeline project.”