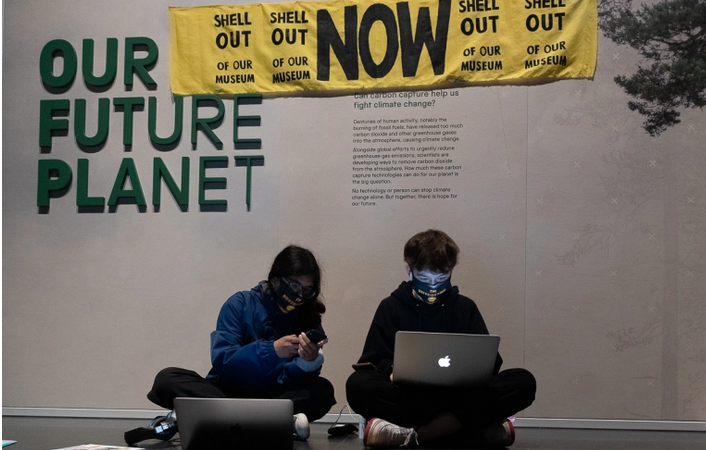 Oil giant Shell continues to excel as a climate villain, happy to drive humanity beyond the limits of a liveable future.

Speaking last week, Shell’s Chief Executive, Ben van Beurden said the oil company had no plans to alter its strategy, despite a historic recent court ruling by a Dutch court forcing Shell to make a 45% cut to its carbon emissions by the end of the decade. The company is acting as if it is above the law.

But it gets worse. For years, dogged climate campaigners have tried to stop the oil companies from greenwashing their operations via sponsoring the arts. They have had amazing victories such as the Royal Shakespeare Company pulling out of a sponsorship deal with BP.

Shell, though, continues to greenwash its image by sponsoring the prestigious Science Museum in London. And without any drop of irony, earlier this year in May, Shell sponsored an exhibition entitled “Our Future Planet” which is promoting false climate solutions, such as carbon, capture and storage.

Since the sponsorship deal was announced, there has been a major backlash with concerned scientists, youth climate activists, exhibition contributors, and the wider public speaking out through protests by the UK Student Climate Network (UKSCN) and a youth-led boycott of the exhibition.

Last month, the museum shut down an overnight protest and 24-hour livestream broadcast led by UKSCN London against the sponsorship deal. Thirty police officers entered the museum and proceeded to threaten the group of teenage activists and scientists with arrest in what was seen as a heavy handed response.

A petition demanding the Science Museum drop the sponsorship has garnered 50,000 signatures.

And now an investigation by the group campaigning to kick oil out of the arts, Culture Unstained, in collaboration with the broadcaster Channel Four News, has uncovered a “gagging clause” in the contract.

Exclusive: The Science Museum has signed a gagging clause in its agreement with Shell International to sponsor its climate change exhibition, agreeing to take care not to say anything that could damage the company’s reputation, Channel 4 News has learnt.

The Science Museum appears to be so desperate to take Shell’s money that it signed a contract stating that it must take reasonable care “not at any time” to “make any statement or issue any publicity or otherwise be involved in any conduct or matter that may reasonably be foreseen as discrediting or damaging the goodwill or reputation of the Sponsor.” And of course the sponsor is Shell.

Despite the public backlash to the sponsorship deal, Shell has also been trying to get even more oil money. Emails uncovered by Culture Unstained reveal the Museum asked Shell to “champion” the exhibition to The Oil and Gas Climate Initiative, whose members include BP, Chevron, Exxon, as well as Saudi Aramco. It’s Big Oil’s ultimate greenwashing group.

Jess Worth, Co-director of Culture Unstained, said: “As we witness floods and wildfires across the world, it’s morally bankrupt for the Science Museum Group to suggest Shell and other oil companies are on the right decarbonisation path.”

Worth added: “The decision by senior management to then sign a gagging clause to protect Shell puts other staff in a very difficult position and this should be of great concern to the museum sector as a whole.”

Izzy Warren from UKSCN London, added “for decades, Shell spent millions on climate denial and delay and today, its determination to continue burning fossil fuels while claiming to go ‘net zero’ is the subject of intense criticism … With climate impacts intensifying, these moves by the museum are unacceptable.”

Meanwhile on Twitter, ex-employees have been vocal that the Shell sponsorship deal was a factor in them leaving the Museum.

I used to work at The Science Museum and their strong ties to companies like Shell International was my reason for declining to pursue any kind of career with them, I vocalised this to my management at the time. The hypocrisy and hush hush mentality was intense. https://t.co/VUHVgKsdpY