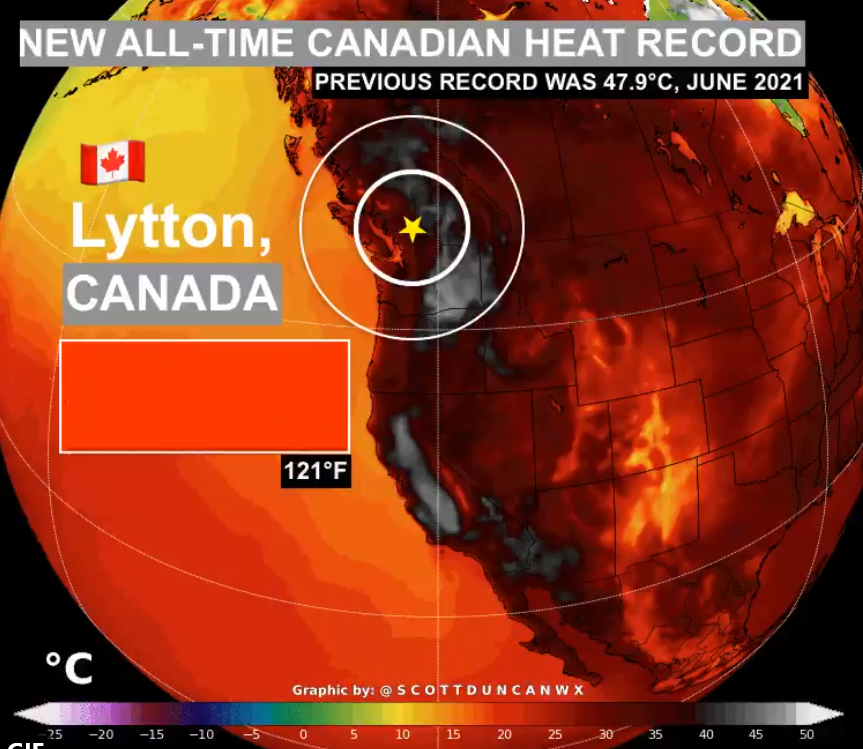 Across the globe, from Northern Canada to New Zealand, killer heat is having a devastating effect on people, wildlife, and our natural environment. And there seems to be no respite for some of the worst affected areas.

The Pacific Northwest of the U.S. and Canada seem stuck in a devastating heat dome, with temperatures rising again this week.

Jim Rouiller, lead meteorologist at the Energy Weather Group told Bloomberg earlier today that in California’s Death Valley, temperatures could approach 130 by this weekend. “A record-shattering heat wave is now a reality across the Pacific Northwest and California and will likely come back periodically through August,” said Roullier, before adding that the “fire risk will soar.”

The heat is having dire consequences: The record breaking heat last week in British Columbia (B.C.), where temperatures topped 121 degrees, was responsible for hundreds of deaths beyond what would be normal at this time of year.

According to Lisa Lapointe, the B.C. Chief Coroner, “it is believed likely that the significant increase in deaths reported is attributable to the extreme weather B.C. has experienced.” The province has also experienced hundreds of wildfires, too.

BC is not alone: According to the New York Times, Oregon’s state medical examiner’s office said last week that over 60 deaths were attributable to the heat. The heat is also having a crippling impact on the region’s infrastructure, so intense that roads are melting in the region.

And it is pushing the power grid in the Pacific U.S. Northwest to its limit, with rolling blackouts being implemented in Washington State at the end of last month. Indeed, some estimates put it that the U.S needs to invest some USD 500 billion to make their electrical grid more resilient to climate change otherwise blackouts will continue.

The heat is having a devastating effect on fauna and flora. Chris Harley, a marine biologist at the University of British Columbia, told CBC News that he estimates that last week’s record-breaking heat wave in B.C. may have killed more than one billion seashore animals living along the Salish Sea coastline. “I was pretty stunned,” said the scientist whose team recorded temperatures of 50°C on the shoreline.

CBC News reported that Harley’s team “discovered endless rows of mussels with dead meat attached inside the shell, along with other dead creatures like sea stars and barnacles.” Further dead shellfish discoveries have also been made in the Strait of Georgia and Washington state. Meanwhile the trees in Vancouver are literally dying in the heat, too.

But the Pacific Northwest is not alone in suffering unbearable heat. Record-high temperatures are also being experienced in Scandinavia and Russia with temperatures in towns in the north of the region reaching record highs over the weekend.

According to the Guardian, “Nordic countries have registered near-record temperatures over the weekend, including highs of 34C (93.2F) in some places…Kevo, in Lapland, recorded heat of 33.6C (92.5F) on Sunday, the hottest day since 1914 when authorities registered 34.7C. (94.5F)”

Lapland under extreme heat right now. 34.3°C at Banak, Norway ?? This level of heat has never been observed above 70 degrees north in Europe before.

Scandinavia has been in the oven for a while. A very hot June followed by a hot start to July. Widely 10-15°C hotter than average. pic.twitter.com/dYLHOMrhLQ

Meanwhile in New Zealand, the country has just experienced its hottest June since records began over one hundred years ago.

And unless we curb our carbon emissions, things are going to get worse. As Sir David King, the former UK chief scientific adviser, said: “Nowhere is safe … who would have predicted a temperature of 48/49C in British Columbia?”