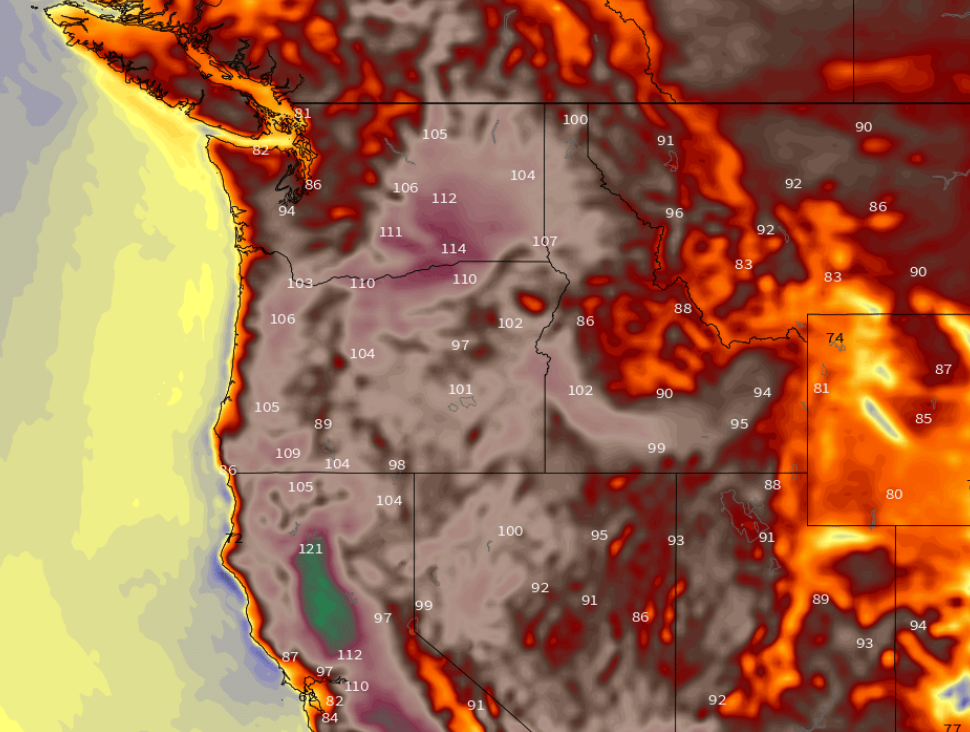 As I write, the Western parts of the U.S. are already suffering from record heat, and forecasts for an additional heatwave in the U.S. Pacific Northwest suggest all-time heat records could be broken across the region over the weekend.

One of the largest wildfires erupted late last week on California’s iconic Big Sur. The Willow Fire has already burned thousands of acres, with hundreds of firefighters deployed to contain it.

Earlier this week, the California Fire Department has tweeted:

#RedFlagWarning in effect for today through tomorrow morning across northeast California due to strong, gusty winds and potential dry lightning. This is #CriticalFireWeather so use caution outdoors. More tips: https://t.co/upBwccxXFO pic.twitter.com/i6YUkif2mw

The Department is warning of “the onset, or possible onset, of critical weather and dry conditions that could lead to rapid or dramatic increases in wildfire activity.”

The Willow Fire is just one of the many fires bringing across the region. According to NPR: “the number of new wildfires in the U.S. so far this year is at a ten-year high, according to federal data, prompting warnings of a long, potentially dangerous summer of fire.”

NPR added: “Since January, more than a million acres have burned from more than 28,000 wildfires – the highest number of fires for this date since 2011. There are currently 33 active large fires across the West.”

Already Colorado, Arizona, Utah, New Mexico and Oregon also suffering from wildfires, which does not bode well for the rest of the summer. In Arizona, the so-called Backbone fire has burned more than 32,750 acres so far. In Arizona and Colorado, they are even sending prison inmates to fight the fires.

A view from satellite of the #wildfires burning in Arizona, Oregon, Colorado and Utah pic.twitter.com/m5PUFQPBwM

This weekend the heat is expected to get far worse. Local news reports are that it could be above 100 degrees Fahrenheit in Portland this weekend, with potentially 120 degree heat in Oregon, California and Washington early next week as an extreme”heatdome” hits the region.

ECMWF 12z model develops an extreme "heat dome" over U.S. Northwest with obscene temperatures in excess of 120°F in California, Oregon and Washington early next week ??.
? Probably need to keep a close eye on this ? pic.twitter.com/r2ZjKuXYTA

But fires are just one of the threats in the region. The heat is pushing the electrical grid to the point of breakdown.

And as Nick Martin, a staff writer at The New Republic wrote yesterday, the American West is “a region now facing three overlapping climate crises: a megadrought rounding the corner into its third decade, a record-setting heat wave, and an outbreak of wildfires.”

Martin points out that, even now, even in the midst of a climate emergency, many parts of the U.S. media remains largely silent on linking extreme weather to our climate crisis. “The problem is, too few media outlets are framing the West’s current water, heat, and wildfire issues—or the South’s growing hurricane problem, or the Midwest’s increasingly frequent floods—within the broader issue of an emissions-driven climate crisis,” writes Martin.

Two exceptions to this rule are the Los Angeles Times and the indefatigable Democracy Now. On Sunday, the Times ran a piece: “California’s hottest, driest days are getting even drier, worsening fire risk,” in which the paper said: “The invisible hand of climate change is hard at work here,” before adding: “we’re going to need to stop putting carbon in the atmosphere, full stop.”

Meanwhile, Democracy Now will debate the U.S. infrastructure bill in relation to the baking temperatures and heat in the West. Their guest is Leah Stokes, an Assistant Professor of Political science at the University of California, Santa Barbara. Stokes says “The climate crisis is here now. The climate crisis is really happening right now, and every single year we delay on passing a climate bill, the worse the crisis gets.”