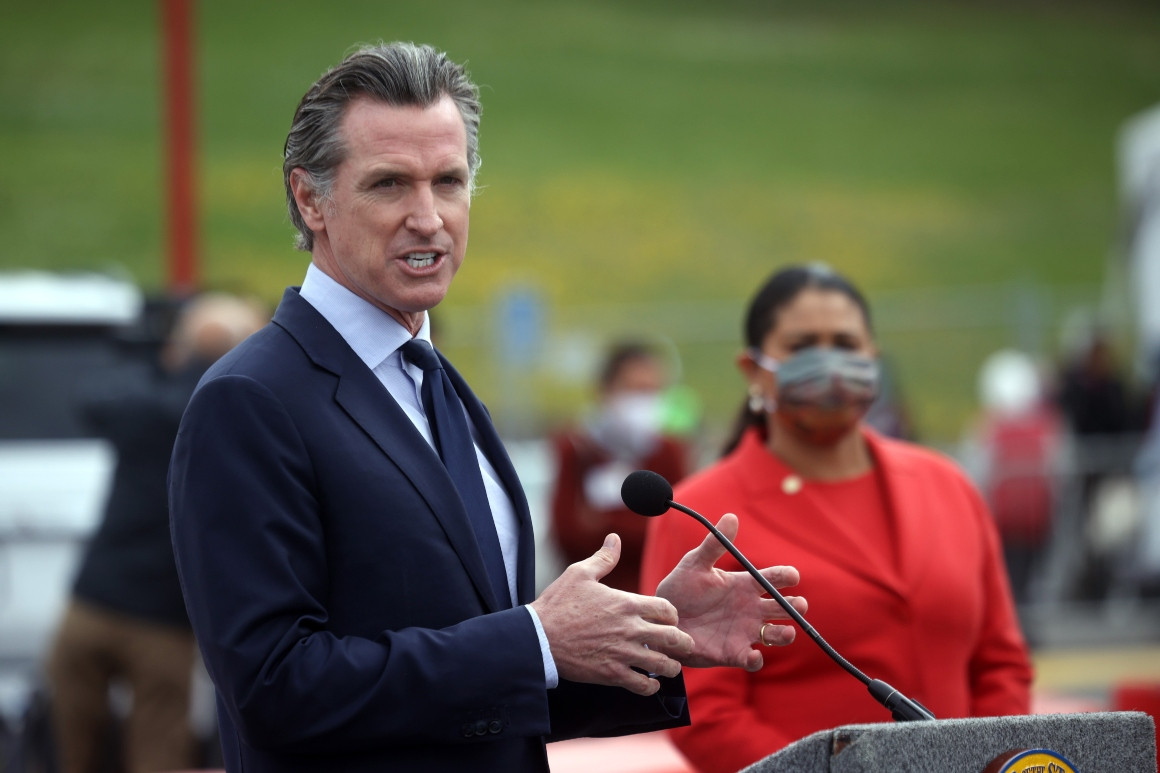 SACRAMENTO, CA — Today, Gov. Newsom announced a ban on new fracking projects by 2024 and directed the California Air Resources Board (CARB) to analyze pathways to phase out oil extraction across the state by no later than 2045.

The Governor’s announcement comes after years of pressure from environmental justice, public health, labor and climate organizations across California, who call on Newsom to stop issuing new oil and gas drilling permits, phase out existing oil extraction, and establish 2,500-foot setbacks between oil wells and sensitive land uses. While the announcement sets a vision for a managed decline of fossil fuel extraction, it sets a sluggish pace that fails to keep pace with science-backed timelines necessary to stave off the worst impacts of climate change.

Earlier this week, Newsom’s CalEPA released a study on supply-side options to achieve carbon neutrality by 2045. The state’s own findings show that a fracking ban alone is wholly insufficient to meet our emissions reductions goals. Mandating a 2,500-foot minimum setback distance separating oil wells from neighborhoods would be more effective at reducing GHG emissions from extraction and provide immediate health benefits to frontline communities.

Yet, the Governor failed to support a bill that would have restricted the most dangerous oil and gas extraction and mandated distance between oil operations and neighborhoods — a bill that has enthusiastic support from CA’s environmental justice communities. There is an overwhelming body of evidence that shows the closer you live to an oil well, the more severe the health consequences. Considering oil and gas pollution is a life-or-death issue for frontline communities and a key driver of climate emergency, today’s announcement fails to center justice and public health in California’s climate policy.

Newsom is facing a heated recall challenge and climate policy is an opportunity for his administration to speak directly to Californians about his capacity to consistently lead through crises with vision, integrity and equity. Eighty percent of Californians consider climate change “a serious concern” and 60 percent want to see state-led climate action. His announcement today does not meet the scale and urgency of Californians’ concerns over climate change, and fails to keep pace with the timelines recommended by science in order to mitigate climate change.

Below please find quotes from climate justice and community leaders:

“On the heels of Earth Day, we expect leaders of the California Democratic Party and Governor Newsom to propose and commit to transformative and aggressive timelines towards ending our reliance on fossil fuels and creating clean energy union jobs for frontline communities. Urgent actions are required to protect vulnerable communities now and achieve our emissions reductions goals that meet the scale and timeline of California’s climate emergency,” said Bahram Fazeli, Policy Director, Communities for a Better Environment.

“We welcome the Governor’s historic announcement that we need a just transition away from oil, yet we are acutely aware of the slow and often exclusionary nature of regulatory processes. Communities need immediate relief to the heath assaults of oil and gas extraction in the form an immediate 2,500-foot health and safety buffer,” said Martha Dina Agruello, Physicians for Social Responsibility – Los Angeles.

“With today’s executive order, Governor Newsom has committed to a public process to guide the managed decline of oil and gas production in California, and that is a bold step back into climate leadership after the legislature’s failure on SB 467 last week. We’re looking forward to engaging with the administration on both the timeline and pathways of this plan, and we will push very hard to phase out extraction on a tighter time frame and in a manner that prioritizes communities and mitigating environmental racism. As a first step, we call on the governor to create an emergency rule creating 2500 foot oil and gas setbacks from homes, schools, hospitals, and other sensitive receptors,” said Dan Ress, Staff Attorney at The Center on Race, Poverty, and the Environment.

“Today’s executive order is an important step toward climate justice, and we are excited the Governor has finally shared what we’ve all known all along: we need to work together to bring about a just transition away from oil and gas in California. We will continue to pressure the administration on the timeline and pathways of this plan, and the best way to start is to protect people and workers most affected first. It’s time for the Governor to support 2,500-foot health and safety buffer zones,” said Kobi Naseck, Coalition Coordinator with Voices in Solidarity Against Oil in Neighborhoods (VISIÓN).

“Of course this directive has a huge impact on our communities and is a historic public commitment to a just transition away from fossil fuels. But, why do people of color always have to wait? We have been asking for setbacks for years, and every day that we allow the inherently dangerous practice of neighborhood drilling is an assault on our lungs, and it is an assault on justice. The first step of this directive and plan should be to create minimum 2,500-foot health and safety setbacks to protect frontline communities – that’s what the EJ community deserves,” said Cesar Aguirre, Central California Environmental Justice Network.

“It’s historic and globally significant that Gov. Newsom has committed California to phase out fossil fuel production and ban fracking, but we don’t have time for studies and delays. Californians living next to these dirty and dangerous drilling operations need protection from oil industry pollution today. Every fracking and drilling permit issued does more damage to our health and climate,” said Kassie Siegel, Director of Climate Law Institute at Center for Biological Diversity.

“CalGEM data shows that a ban on well stimulation will do very little to improve environmental quality for Frontline Communities, compared to the public health benefits of a responsible setback. Governor Newsom’s administration must look to the leadership of Frontline Communities and Grassroots, rather than offer performative gestures,” said Kyle Ferrar, Western Program Coordinator at FracTracker Alliance.

“While it is significant that for the first time Governor Newsom is acknowledging the need to ban fracking and his authority to do it, this announcement is a half measure as it allows continued drilling and fracking for the next two and a half years. It comes after years of pressure and dedicated organizing by thousands of Californians who want a just transition away from fracking now. Directing his regulatory agencies to do the work over two and a half years that the governor can do today is more of the dodging we’ve seen from Newsom during his entire tenure. Phasing out oil drilling is absolutely necessary, but 2045 is a long way off. Until then, Newsom leaves Californians on the frontlines to pay for the oil industry’s scars on the landscape and damage to community health. He needs to use the authority the law has given him to stop issuing all new oil and gas permits, ban fracking completely and phase out oil drilling now starting with a 2,500-foot health and safety buffer between wells and sensitive sites. Newsom needs to protect our water supplies as we head into a destructive drought and guard our frontline communities from further harm,” said Alex Nagy, California Director at Food & Water Watch.

“While today’s announcement signals an important first step by Governor Newsom by Governor Newsom towards climate and environmental justice, it doesn’t do enough to address the increasingly urgent climate and public health crises facing Californians today. Californians don’t need another regulatory delay to tell us what we already know. California already faces the intensifying impacts of the climate crisis, which could get even worse just as the state aims to recover from the pandemic — and Governor Newsom has a golden opportunity to lead the rest of the country in tackling the number one driver of the climate crisis. For Governor Newsom to reclaim California’s title as an innovator and climate leader, he must take bold steps to protect people and the planet from dangerous fossil fuel expansion: by committing to a 2,500-foot buffer zone to protect communities living near drilling, jumpstarting investments in a just transition so no workers and communities are left behind by the decline of the fossil fuel industry, and beginning a bold phase out of fossil fuels today. These are the kinds of solutions we urgently need to address fossil fuel racism, public health disparities, and give workers and communities a chance to live safe, secure, and healthy lives,” said Dr. Amy Moas, Senior Climate Campaigner at Greenpeace USA.

“The Governor’s acknowledgment today that ‘California needs to move beyond oil’ is exactly right, but we must move quicker, and a fracking ban is only one piece of the puzzle. We can’t risk another two decades of dangerous oil extraction, like cyclic steam injection and steam flooding, that threaten our communities’ water and air, and our state’s mosaic of natural resources,” said Tara Messing, Staff Attorney with the Environmental Defense Center.

“Mothers across California are happy to see Governor Newsom acknowledge the need to transition California off the production of fossil fuels, and we applaud the ban on fracking as a modest first step. However, we remain alarmed that over 2 million Californians — mostly in Black, Latinx and Indigenous communities — continue to be exposed to toxic oil and gas drilling less than a mile from their homes and schools, elevating their risk of dying from COVID-19. To protect public health and safety–and to accelerate a just transition from climate-destabilizing fossil fuels–we urge Governor Newsom to impose an emergency moratorium on toxic drilling within 2500 feet of homes, schools, playgrounds, hospitals, and other sensitive sites. If 12 other oil-producing states, including Texas, can implement setback limits, California can and must, too — now!” said Linda Hutchins-Knowles, California Senior Organizer with Mothers Out Front.

“Governor Newsom’s announcement shows the tide is turning swiftly against fossil fuel extraction. California is the highest-producing jurisdiction in the world so far to commit to a phase-out of oil extraction, and other major producers need to join the state in committing to move beyond oil and gas. Our climate emergency demands bold action, and time is of the essence. New fracking permits should be rejected starting immediately — not in 2024. Governor Newsom must follow today’s announcement with a 2,500-foot health and safety buffer to help Californians suffering from the deadly impacts of neighborhood drilling,” said Collin Rees, Senior Campaigner with Oil Change International.

The Last Chance Alliance is an alliance of more than 750 public health, environmental justice, climate, and labor organizations united to urge Governor Gavin Newsom to end fossil fuel extraction across California and build a just climate future where every community can thrive.