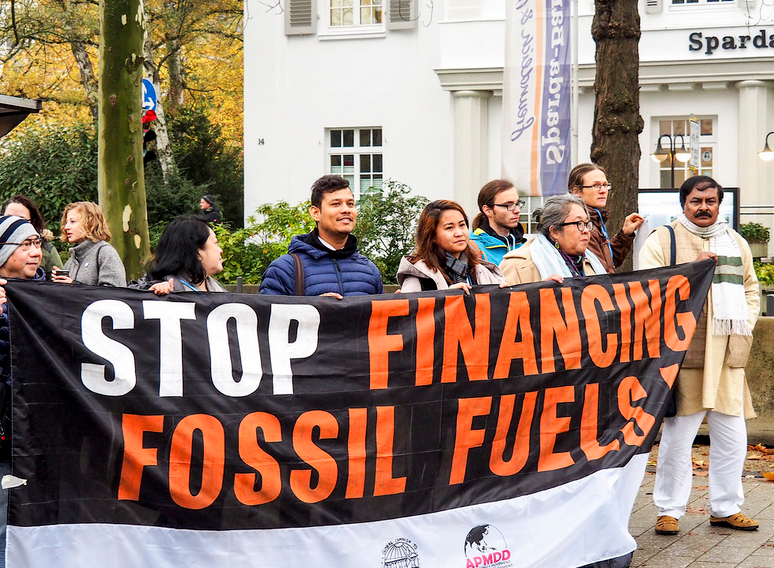 This week 40 world leaders are gathering at the Leaders Summit on Climate hosted by President Biden. The Summit aims to catalyze efforts to keep the 1.5C goal within reach and is envisioned as a key milestone in the run up to the crucial UN climate conference, COP26, to be held in Scotland later this year.

Yesterday, Climate Action Network International organized a pre-Summit press briefing where civil society organizations shared their expectations and demands for the Summit. Their voice was loud and clear: climate leadership means stopping fossil fuel expansion, doing your fair share to reduce emissions, and for rich countries to pay their climate debts they owe towards just and equitable climate action.

Jean Su, Energy Justice Director at the Center for Biological Diversity, called on President Biden to: “immediately end the fossil fuel era, deploy just and resilient renewable energy systems, and do so in a way that combats the country’s deep inequalities and racism that it is festering from.”

Jennifer Morgan, Executive Director at Greenpeace International said: “To be regarded as a climate leader, Biden has to phase out fossil fuels at home and abroad, and support other governments to follow suit. This means unequivocally ending all direct and indirect fossil fuel subsidies. The United States must act now to reduce absolute emissions by 70% from 2005 levels by 2030, and get on the path to zero emissions.”

I joined the panel to speak on behalf of the Global Gas and Oil Network and share the main take-aways from an updated analysis from the Stockholm Environmental Institute (SEI) on fossil fuel extraction.

It should be clear that this week’s Summit cannot be celebrated as a success unless rich oil and gas producing countries, including the US, Canada, Norway and the UK, take decisive action to stop fossil fuel expansion. From an equity perspective, these are countries that need to move fastest in phasing out oil and gas. They have the biggest responsibility for historic emissions and more diversified economies, meaning they are best positioned to move out of fossil fuels quickest.

But instead of planning for a managed phase-out of oil and gas, the US, Canada, the UK and Norway are currently on track to significantly increase their oil and gas output, which is utterly inconsistent with keeping global warming limited to 1.5C. By continuing to hand out permits and subsidies for new drilling they add fuel to the fire of the already dire climate crisis and put the profit of a wealthy few before the wellbeing of many.

Let us take a quick look at the relevant numbers:

So how are self-proclaimed climate leaders doing? Let us again take a look at the numbers:

Meanwhile this production is propped up with huge sums of public money. The G20 governments, led by China, Canada and Japan, provide about 77 billion dollars a year in public finance for fossil fuel energy. This is three times the support they provide to clean energy. And is in addition to more than 400 billion a year in subsidies and other kinds of government support. While world leaders are paying lip service to a green recovery, since the pandemic they have put more recovery money into fossil fuel intensive sectors than into clean energy.

Governments can change direction. In fact some of them are: Denmark announced a ban on new licensing rounds at the end of last year; the UK put an end to public finance for fossil fuel projects overseas as of last month; and the US Biden administration has committed to taking action to reduce fossil fuel subsidies. But countries need to be consistent in their efforts to tackle fossil fuels. There is no time left for a step by step approach.

1) If you are in a hole stop digging: countries need to stop the expansion of fossil fuel production now, by putting an immediate halt to new digging and drilling;
2) put your money where your mouth is: governments need to end fossil fuel subsidies and make public finance fossil free; which
3) can free up the resources to invest in a more equitable future: countries must invest in a fossil free COVID-19 recovery, just transition plans led by affected workers and communities, and increased finance for low-income countries to help them leapfrog straight into clean energy development.

As we are seeing in Mozambique, where the recent escalation of violence is deeply connected to gas developments, oil and gas is not the solution for developing countries. In Mozambique over 550 families have been removed from their homes, farmlands and fishing waters to make place for the gas developments. Increased dissatisfaction with worsening inequality, linked to the gas boom, has contributed to the insurgency that has killed more than 2600 people.

Rich countries at this week’s Climate Summit need to take decisive action to stop the expansion of oil and gas production, both at home and abroad, both to protect the global climate and local communities. True climate leadership means breaking away from destructive oil and gas and investing in real solutions and green jobs that will help people and the planet thrive.