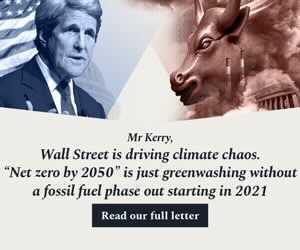 WASHINGTON, DC — On Tuesday, 145 organizations sent a letter urging Special Presidential Envoy for Climate John Kerry to use his powers to end the flow of finance from Wall Street to the industries driving climate change.

The letter comes in the wake of the Special Envoy’s recent comments that the private sector — not government — will drive the fight against climate change, and that “solutions are going to come from the private sector.” Special Envoy Kerry’s comments seemed to take the onus off of policy makers and place them on markets and corporate actors, which have been notoriously slow to account for climate change and its risks.

The Climate Envoy has also endorsed private sector solutions that are already creating heightened risks for both the climate and the economy: While the Securities and Exchange Commission is publicly warning investors about the unique risks of “blank check” companies or SPACs, the Climate Envoy called these risky investment products “exactly what we need” to finance a green future.

The climate, economic, and racial justice groups signing the letter contend that they do not currently see Wall Street as an ally on climate change. As the groups write, “as long as U.S. firms continue to pour more money into the drivers of climate change, they are actively undermining President Biden’s climate goals.” The signers point to Wall Street firms’ continued funding, insuring, and investing in the climate crisis, while conveniently relying on long-term and unspecified “net zero” pledges in lieu of meaningful and timely action.

“Climate policy has so far been left to markets, and now we’re in a climate crisis. It’s time that the U.S. government take the reins back from Wall Street so we can assure the rapid, justice-centered decarbonization necessary for a livable planet,” said Moira Birss, Climate and Finance Director at Amazon Watch, and steering committee member of the Stop The Money Pipeline coalition.

The signers urge that, “In order for the U.S. to demonstrate global climate leadership, we must take action to end financing of fossil fuels and deforestation around the world by U.S. firms and entities,” and that, “A climate action approach that seeks to partner with Wall Street without also holding it accountable is no longer credible in 2021.”

“Wall Street amassed its riches by pouring money into fossil fuels, and they don’t want that gravy train to end. It’s dangerous to suggest that the very institutions that financed and fueled the climate crisis should dictate our response to it. Climate Envoy Kerry must support the use of the levers of government to end U.S. and international institution support for fossil fuel and forest-destroying financing,” said Doug Norlen, Director, Economic Policy Program, Friends of the Earth U.S.

“Kerry’s recent statement that the government can’t do much more than help Wall Street fix the climate crisis is deeply troubling,” said David Arkush, director of Public Citizen’s Climate Program. “Wall Street is almost completely on the wrong track, and we need financial regulators to help right the course.”

In the letter, the groups request a meeting to discuss the role the Special Envoy’s office can play in addressing the financial industry’s role in the climate crisis. They also urge Kerry to: