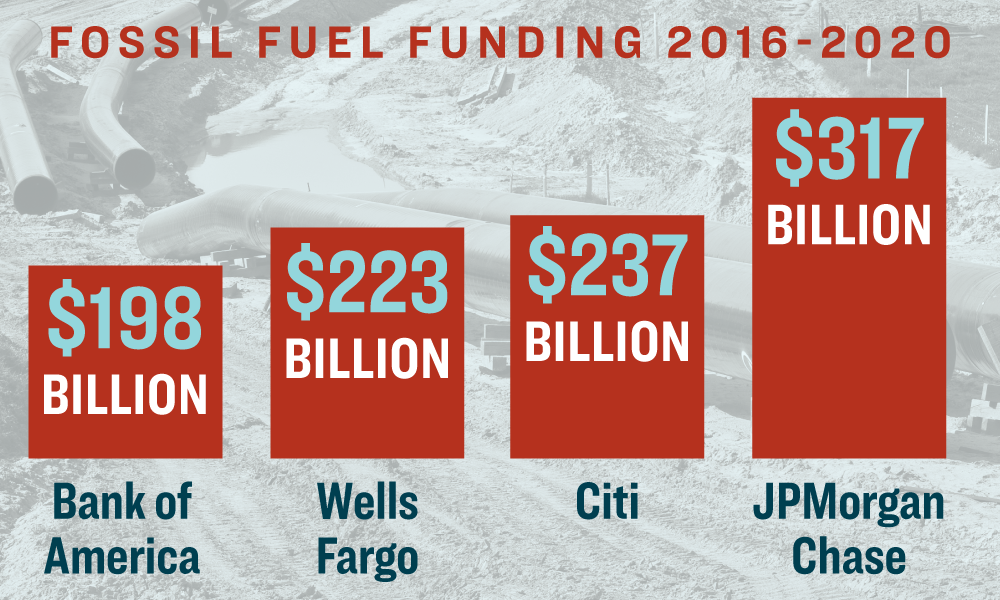 This report analyzes fossil fuel financing from the world’s 60 largest commercial and investment banks — aggregating their leading roles in lending and underwriting of debt and equity issuances — and reveals that these banks poured a total of USD $3.8 trillion into fossil fuels from 2016–2020. Fossil fuel financing dropped 9% last year, parallel to the global drop in fossil fuel demand and production due to the COVID-19 pandemic. And yet 2020 levels remained higher than in 2016, the year immediately following the adoption of the Paris Agreement. The overall fossil fuel financing trend of the last five years is still heading definitively in the wrong direction, reinforcing the need for banks to establish policies that lock in the fossil fuel financing declines of 2020, lest they snap back to business-as-usual in 2021.

JPMorgan Chase remains the world’s worst banker of fossil fuels over this time period, though its funding did drop significantly last year. Citi follows as the second-worst fossil bank, followed by Wells Fargo, Bank of America, RBC, and MUFG. Barclays is the worst in Europe and Bank of China is the worst in China. This report also tracks funding for 100 top fossil fuel expansion companies and finds JPMorgan Chase, Citi, and Bank of America to be their biggest bankers over the last half decade, all with significant increases in funding last year despite voicing their support for the Paris Agreement.

Despite the significant drop from 2019 to 2020, the overall trend of the last five years is one heading definitively in the wrong direction. We must go forward to a world where even without a pandemic, fossil fuel production declines almost as quickly every year for the next decade as it did in 2020 — but this time in a managed way. This means that banks must establish policies that lock in the fossil fuel financing declines of 2020, lest they snap back to business-as-usual in 2021. To align their policies and practices with a world that limits global warming to 1.5ºC and fully respects human rights, and Indigenous rights in particular, banks must: