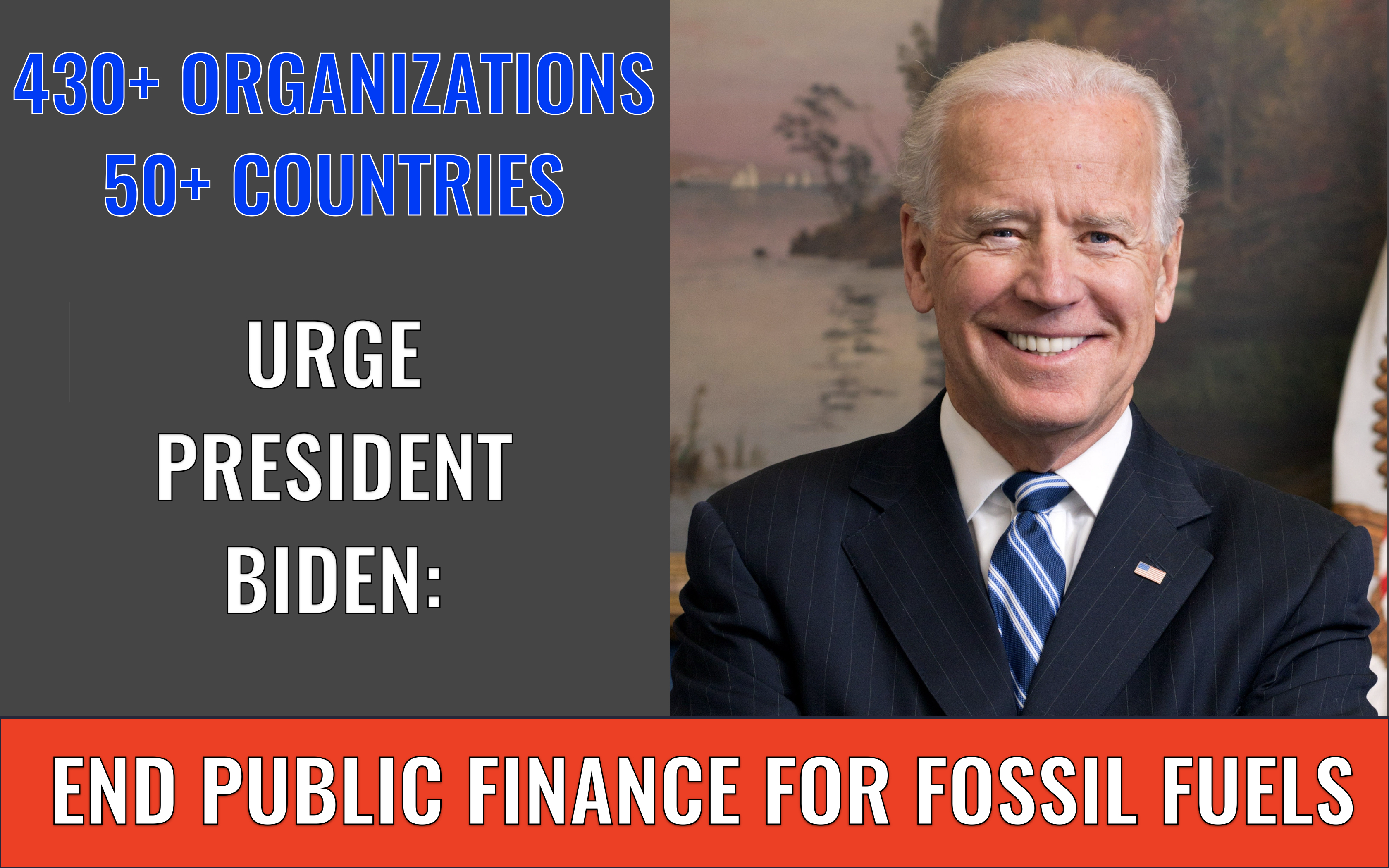 Signatories to the letter span six continents and include major U.S. civil society organizations, international groups, and organizations in the Global South concerned about the impacts of U.S. support for overseas fossil fuel projects.

U.S. public finance for overseas fossil fuel projects averaged more than $4 billion (USD) annually over the past decade, according to Oil Change International data, at times exceeding $10 billion USD in a single year. This finance was distributed primarily through the U.S. Export-Import Bank and the U.S. Development Finance Corporation, formerly the U.S. Overseas Private Investment Corporation.

The letter follows a Biden Administration executive order which directed agencies to end “carbon-intensive” finance, a commitment that Climate Envoy John Kerry characterized as “a plan for ending international financing of fossil fuel projects with public money.” The signatories call for a policy that excludes U.S. public finance for all fossil fuels, including gas, which received high volumes of support under both the Obama and Trump administrations.

The letter argues that if the U.S. announces an immediate end to its international support for fossil fuels, this would influence many other governments to do the same, and could help eliminate tens of billions of dollars annually in support for the fossil fuel industry. Analysis shows that G20 governments alone have provided at least $77 billion USD annually in public finance for fossil fuels, even after the Paris Agreement was reached.

A commitment to end fossil fuel finance would enable the U.S. to join forces with other governments that have taken steps in this direction. The United Kingdom — the host of this year’s G7 Summit and United Nations climate negotiations — is the first major economy to announce such a policy across the whole of government. Prime Minister Boris Johnson announced an end to public finance for fossil fuel projects overseas in December 2019, and following a public consultation on the topic, the government is expected to publish its new policy over the next few weeks. A joint commitment around the time of the G7 Summit in June, for example, would put further pressure on peers providing large volumes of finance for highly-polluting activities such as Japan, Canada, and China, and would build momentum for climate action toward the United Nations climate negotiations in November.

If the commitment comes soon, it could also significantly influence the Asian Development Bank’s review of their energy lending policy, as the U.S. is the Bank’s largest shareholder alongside Japan.

Click here to read the full letter and signatories.

Organizations who signed the letter provided the following statements:

“Governments can’t claim to be serious about climate change if they pump billions of dollars into the most polluting industries every year. If President Biden is serious about zeroing out emissions by mid-century or earlier, the U.S. must end its billions of dollars in support for oil, gas, and coal projects around the world,” said Alex Doukas from Oil Change International.

“U.S. financing of fossil fuel projects all over the world has led to devastating impacts on local communities and even loss of lives. President Biden must shift this destructive financing away from fossil fuels toward distributed renewables that can improve livelihoods through access to clean and affordable electricity.” said Kate DeAngelis from Friends of the Earth United States.

“By promoting fossil fuel projects overseas, especially gas infrastructure, the U.S. is making it harder for countries to decarbonize. We have to stop subsidizing fossil fuel companies at the expense of our climate. It’s irrational for an administration so focused on climate change to promote LNG facilities. Those facilities could waste billions in taxpayer dollars and would lock countries into high-emissions pathways. Why would we promote fossil fuel infrastructure in Vietnam, for example,  instead of competing with European and Chinese businesses that are dominating the renewables market there?” said Han Chen, manager of energy for the International program at NRDC (the Natural Resources Defense Council).