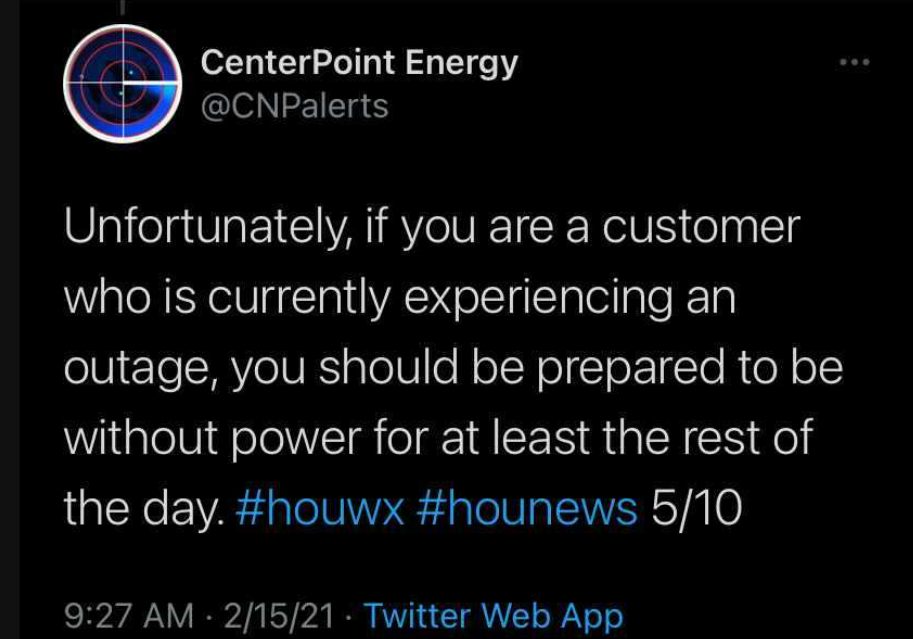 The devastating deep freeze continues to cause havoc in Texas and other southern states in the United States.

With no sign of abating until the weekend, hundreds of thousands of people remain without power and millions without clean drinking water due to frozen and burst water pipes.

At least forty seven people have already died in the two major winter storms, 30 of them in Texas alone.

Although many people have had power restored, widespread power outages are continuing. The political fallout has been immense, especially in Texas. “I want everyone to know that all of us in the state of Texas believe it is completely unacceptable that you had to endure one minute of the challenge that you faced,” Texas Gov. Greg Abbott (R) said yesterday at a press conference. “We will not stop until normalcy is restored to your lives.”

One of the state’s Republican Senators, Ted Cruz, suffered the humiliation of having to return early from an ill-advised holiday having been widely ridiculed on twitter for holidaying in the sun as people died at home.

Yesterday the Houston Chronicle raged: “Texans’ anger with Ted Cruz right now could power an entire electrical grid. He plopped himself down on a direct flight to paradise and left us to fend for ourselves in this frozen hell.”

Also yesterday the House Speaker, Nancy Pelosi (D-Calif.) signaled the start of a congressional inquiry into the causes for the prolonged outage.

What has emerged is that without rolling blackouts the whole energy grid of Texas could have collapsed, leading to widespread debate as to why it was allowed to happen.

As the Washington Post noted today: “Rich in both fossil fuels and self-confidence, Texas has long been devoted to its singular power grid, rejecting federal electricity regulation and the kinds of shared high-voltage connections with neighboring states that can be found across most of the country.”

Warnings over decades that “confidence in the grid was misplaced were ignored by top officials” said the Post.

What seems to be at fault is the “state’s aggressive deregulation of the grid” pushed by Republicans who are desperate to blame anyone by themselves for the current crisis. One former Texas Governor and Secretary of Energy, Rick Perry, has said that a few days without power is better than submitting to Washington’s oversight.

Other Republican and conservative commentators have blamed the state’s wind turbines for freezing and not generating power. The state’s Agriculture commissioner, Sid Miller, posted on Facebook: “We should never build another wind turbine in Texas. The experiment failed big time.”

“So it was all working great until the day it got cold outside,” said Fox News’s Tucker Carlson. “The windmills failed like the silly fashion accessories they are, and people in Texas died.”

An article on the website of Republican House minority leader, Kevin McCarthy also fear mongered that “if the Biden Administration follows through on its talk to ban fossil fuels, this will happen again, and in more places than Texas. And, those places won’t warm up as fast as Texas (New England, which is resisting new pipelines and moving away from a diversified energy mix, is a polar vortex away from disaster).”

Energy experts and informed media commentators have retorted that wind shutdowns have accounted for less than 13% of the total outages, whereas half the state’s gas production has ceased due to the crisis.

The Climatecrocks website retaliated that it’s “weird that we can run wind turbines just fine in deepest, frigid, Michigan winters, yet the fossil fuel funded politicians tell us that the turbines don’t run in the cold.”

Meanwhile, Bloomberg reported: “Don’t point too many fingers at Texas wind turbines, because they’re not the main reason broad swaths of the state have been plunged into darkness.” The main factors have been “Frozen instruments at natural gas, coal and even nuclear facilities, as well as limited supplies of natural gas.”

Daniel Cohan, associate professor of Environmental Engineering at Rice University, told Bloomberg: “The performance of wind and solar is way down the list among the smaller factors in the disaster that we’re facing. Blaming renewables for the blackouts ‘is really a red herring’.”

On Tuesday, the state’s Republican governor Greg Abbott had also blamed solar and wind for the blackouts, leading AOC to take to twitter to hit back.

I go offline a few days and return to a GOP Gov blaming policies he hasn’t even implemented for his own failures.

Gov. Abbott doesn’t seem to have a grasp on his state, so here’s a reminder: Texas runs 80-90% on fossil fuels.

The real “deadly deal” is his failed leadership. https://t.co/a3YoEqks7K

The truth is fossil fuel infrastructure could not cope to a crisis caused by fossil fuels. What is happening in Texas is climate change in action.

I think it's remarkable that we are now having extremely disruptive climate-related disasters in the winter as well as the summer.

As the Guardian notes: “Associating climate change, normally connected with roasting heat, with an unusual winter storm that has crippled swaths of Texas and brought freezing temperatures across the southern US can seem counterintuitive. But scientists say there is evidence that the rapid heating of the Arctic can help push frigid air from the north pole much further south, possibly to the US-Mexico border.”

Judah Cohen, the Director of Seasonal Forecasting at Atmospheric and Environmental Research told the paper “The current conditions in Texas are historical, certainly generational. But this can’t be hand-waved away as if it’s entirely natural. This is happening not in spite of climate change, it’s in part due to climate change.”

Even the Economist quipped in that “The problem is not, as some argue, that Texas has too many renewables…Texas shows that America needs both a cleaner grid and a more reliable one.”

So one lesson from Texas is that climate change is making our weather more extreme, both in heat and cold. America’s grid is not fit for purpose. Jennifer Granholm, President Biden’s choice to be Secretary of Energy tweeted.

One thing is certain: America’s electricity grid is simply not able to handle extreme weather events. Whether it’s wildfires in California or snowstorms in Texas, we need to upgrade our grid infrastructure ASAP.

You can fix both problems by investing in a clean energy future powered by renewables. You can invest in batteries that don’t shut down in the cold. You can invest in clean energy jobs that will reduce the likelihood of extreme weather events. The solutions are there. They have been there for decades, only to be blocked by the oilmen from Texas.