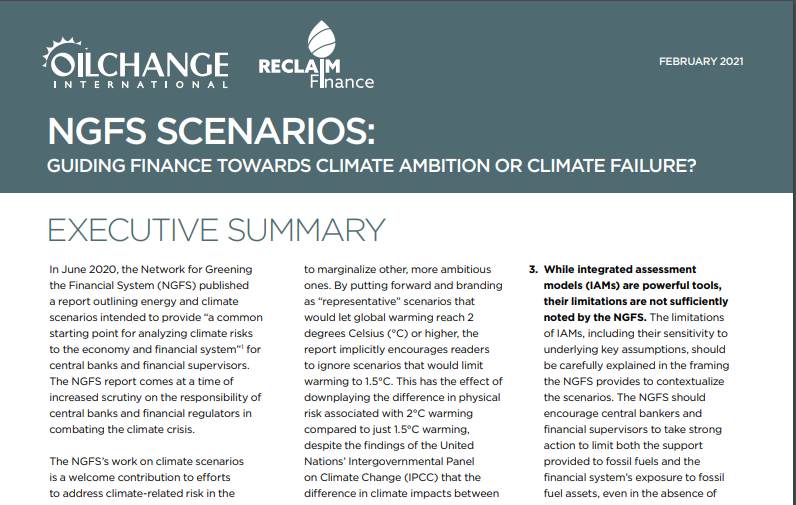 Report: The Network for Greening the Financial System (NGFS) must revise its climate scenarios to drive decarbonization in the financial sector

In a new paper published today, Oil Change International (OCI) and Reclaim Finance analyze the shortcomings of the climate scenarios published by the NGFS and highlight the risk that they may be used to justify slow and inadequate climate action by financial actors. While the stated goal of these scenarios is to help mitigate climate-related financial risks, the report reveals that they may in fact increase them by driving financial institutions to adopt inadequate fossil fuel phase out pathways justified by a risky gamble on negative emissions technologies.

At a time of a proliferation of climate pledges by financial institutions, OCI and Reclaim Finance are calling on the NGFS to review its scenarios to center robust 1.5ºC trajectories that highlight the need for a managed phase out of fossil fuels and to be transparent about the risks of relying on negative emissions to reach climate objectives.

In “NGFS scenarios: guiding finance towards climate ambition or climate failure?“, Oil Change International and Reclaim Finance analyze the scenarios published by the NGFS in June 2020. These scenarios have rapidly become influential tools in the financial community, as demonstrated by the COP26 presidency’s objective to push financial institutions to use them to assess climate risks.

It explains how the framing chosen by the NGFS sidelines 1.5°C scenarios and instead focuses on 2ºC scenarios. The NGFS distinguishes two “representative” scenarios (1) that both aim at 2°C and brands all 1.5ºC scenarios as “alternate”. These “alternate” scenarios are hardly made visible in the NGFS report. Therefore, despite the IPCC’s warnings, the NGFS seems to downplay the difference between global warming of 1.5º and 2ºC.

“At a time when central banks and financial regulators are finally starting to realize they have a responsibility to tackle the climate crisis, the efforts of the NGFS are commendable. However, if not reviewed, its scenarios could do more harm than good. The only safe way to tackle the climate crisis, and thus to preserve financial stability, is to limit warming to 1.5°C through a rapid and managed phase out of fossil fuels.”

The report reveals that all the scenarios highlighted by the NGFS rely on high levels of carbon dioxide removal (CDR), technologies that are unproven at scale and raise significant sustainability and human rights concerns (2). Even the scenarios branded as “limited CDR” entail CDR levels that exceed the mitigation potential estimated in current scientific studies. The risks and potential real-world implications of such a degree of reliance on negative emissions are not made explicit.

The report finally stresses how the previously mentioned framing and reliance on CDR create a pro fossil fuel bias in NGFS scenarios.

While recent research has shown the need to reduce global fossil fuel production by 6% each year from 2020 to 2030 to limit global warming to 1.5°C, the NGFS “marker” scenario also allows for continued high levels of investments in fossil fuel extraction. In this scenario, cumulative investment in fossil fuels from 2016 to 2050 only shrinks by 24% compared to “business as usual”, while it drops by 53% in the “fast transition” 1.5ºC scenario. These differences show that the choice of scenarios to highlight in the report leads to very different conclusions as to the viability of new fossil fuel extraction projects.

“Carbon dioxide removal might be in fashion, but the truth is that we do not know how much it can contribute to mitigating climate change and that doubts remain around its sustainability. So why do NGFS scenarios consider CDR levels that exceed all scientific estimates? One of the scenarios would even require dedicating between one fourth and half of arable land to trap carbon! By betting on unicorns like carbon dioxide removal, NGFS scenarios suggest that a marginal reduction of fossil fuel production is sufficient and even allow for hundreds of billions to be invested in their extraction. As fossil fuel assets concentrate climate risks and NGFS scenarios will play a vital role in mitigating these risks, it is both shocking and disconcerting for the NGFS to disregard the imperative to phase-out fossil fuels.”

Based on the conclusions from this report, Oil Change International and Reclaim Finance call on the NGFS to review its scenarios to position a 1.5ºC scenario, with a precautionary approach to carbon dioxide removal, as the central scenario. It should make transparent the assumptions behind all its scenarios, notably when it comes to CDR. It should also highlight the need for central banks and financial regulators to adopt concrete, rapid measures to eliminate their support to the fossil fuels sector.

(1) The NGFS report considers scenarios in two dimensions. First, whether the 2ºC climate target is met or not. Second, how the transition takes place. Scenarios where targets are met further divide into:

The NGFS paper chooses to center two marker scenarios that are meant to be “representative” of orderly and disorderly pathways.

(2) The report provides details on the limits of carbon capture (CDR and BECCS). Additional information can be found in a paper by Greenpeace.

(3) This is the “GCAM Immediate 2°C with CDR”, called “Representative Orderly” by the NGFS and denominated “marker scenario” in this report.

(4) This is the “REMIND Immediate 1.5°C with limited CDR”, called “Alternate Disorderly” by the NGFS and denominated “fastest transition” scenario in this report.