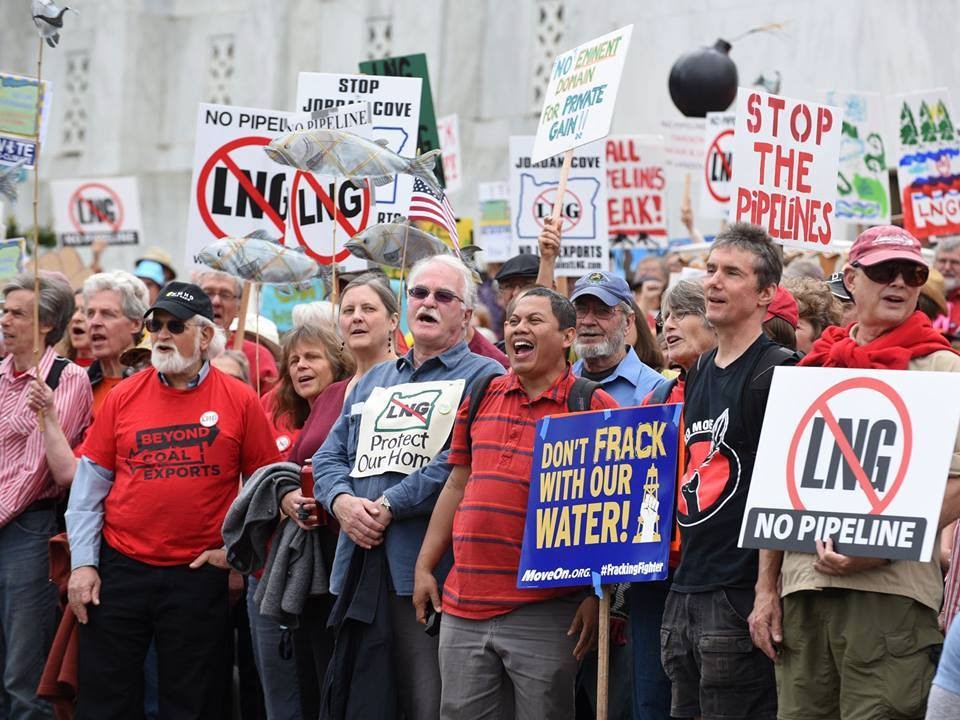 This is the latest in a series of regulatory losses for Jordan Cove LNG, representing a huge blow to the 15-year-old proposal that has been vehemently opposed by Tribes, impacted landowners, fishermen, climate advocates, and others. The project has also not qualified for other critical state, federal, and local permits needed to move forward.

In its summary of today’s meeting, FERC wrote: “The order finds that Jordan Cove and Pacific Connector never requested certification with respect to the Commission authorizations for the Jordan Cove Energy Project and that the Oregon Department of Environmental Quality could not have waived its authority to issue certification for a request it never received.”

“The FERC decision is very encouraging. It is certainly our hope that Pembina will give up on this devastating project once and for all,” said Chairman Don Gentry of the Klamath, Modoc, and Yahooskin Tribes.

“The evidence in the record was clear, FERC had no choice other than to deny Pembina’s request to waive Oregon’s 401 water quality authority,” said impacted Douglas County landowner Stacey McLaughlin. “Any approach to seeking approval of its Pacific Connector Pipeline and Jordan Cove Energy Project without proper permits compromises the safety of Oregon’s landowners. Pembina is proving it cannot be trusted — this is not a characteristic seen in a ‘good neighbor.'”

“The headwinds for the Jordan Cove project continue to blow strongly. FERC’s decision to uphold Oregon’s authority to deny a water quality certification for the project demonstrates that measures are in place to protect the Coos Bay estuary and rivers of southern Oregon,” said marine biologist and Coos County resident Dr. Jan Hodder.

“Today’s unanimous FERC decision shows that when our communities come together and speak out, we win! Thousands of southern Oregonians have raised their voices to stop this project for years and will continue to until the threat of Jordan Cove LNG is gone for good,” said Hannah Sohl, Executive Director of Rogue Climate. “Now we must focus on creating good, local jobs in clean energy and energy efficiency in Oregon.”

“Today’s decision is a huge win for clean water and healthy communities who’ve been fighting this harmful project for nearly 15 years,” said Robyn Janssen, Director of Rogue Riverkeeper. “FERC’s decision to uphold Oregon’s 401 denial gives me hope that this is the end for Jordan Cove LNG.”

“Today’s decision confirms Oregon’s right to protect its communities and waters from big polluters like the proposed Jordan Cove liquefied natural gas terminal and pipeline,” said Andrew Hawley, Attorney at the Western Environmental Law Center. “We have battled this harmful behemoth for decades and defeated it at every turn. With everything we know today about climate change this project must never again rise from the ashes.”

“Jordan Cove LNG would have threatened the drinking water of nearly 160,000 Oregonians. Today’s FERC decision is a win for public health,” said Damon Motz-Storey, Healthy Climate Program Director at Oregon Physicians for Social Responsibility. “Oregon’s right to deny Clean Water Act permits on the basis of unacceptable harm to our water resources is vitally important. This is a day to celebrate.”

“For 15 years this climate-polluting proposal threatened landowners, waterways, forests and imperiled species across southern Oregon,” said Dylan Plummer, grassroots organizer with Cascadia Wildlands. “Today, we can finally breathe a sigh of relief, and tomorrow we will redouble our efforts to end this project for good.”

“The latest rejection of the Jordan Cove project is yet another victory for our clean water and our communities. We’ve said time and again that this project will never be built, and today’s announcement is just further proof of that,” said Sierra Club Senior Attorney Nathan Matthews.

“Jordan Cove LNG was poised to become the biggest source of greenhouse gas emissions in our state of Oregon should it have been approved, responsible for 15 times more emissions than the now-closed Boardman coal plant’s annual emissions. This project was a disaster in waiting for the climate and communities in its path, and today’s news from FERC is a welcome relief after years of fighting this dirty project,” said David Turnbull, Strategic Communications Director at Oil Change International. “Let’s hope this is the start of a new era at FERC, where communities and our climate are protected rather than ignored in the face of industry demands.”