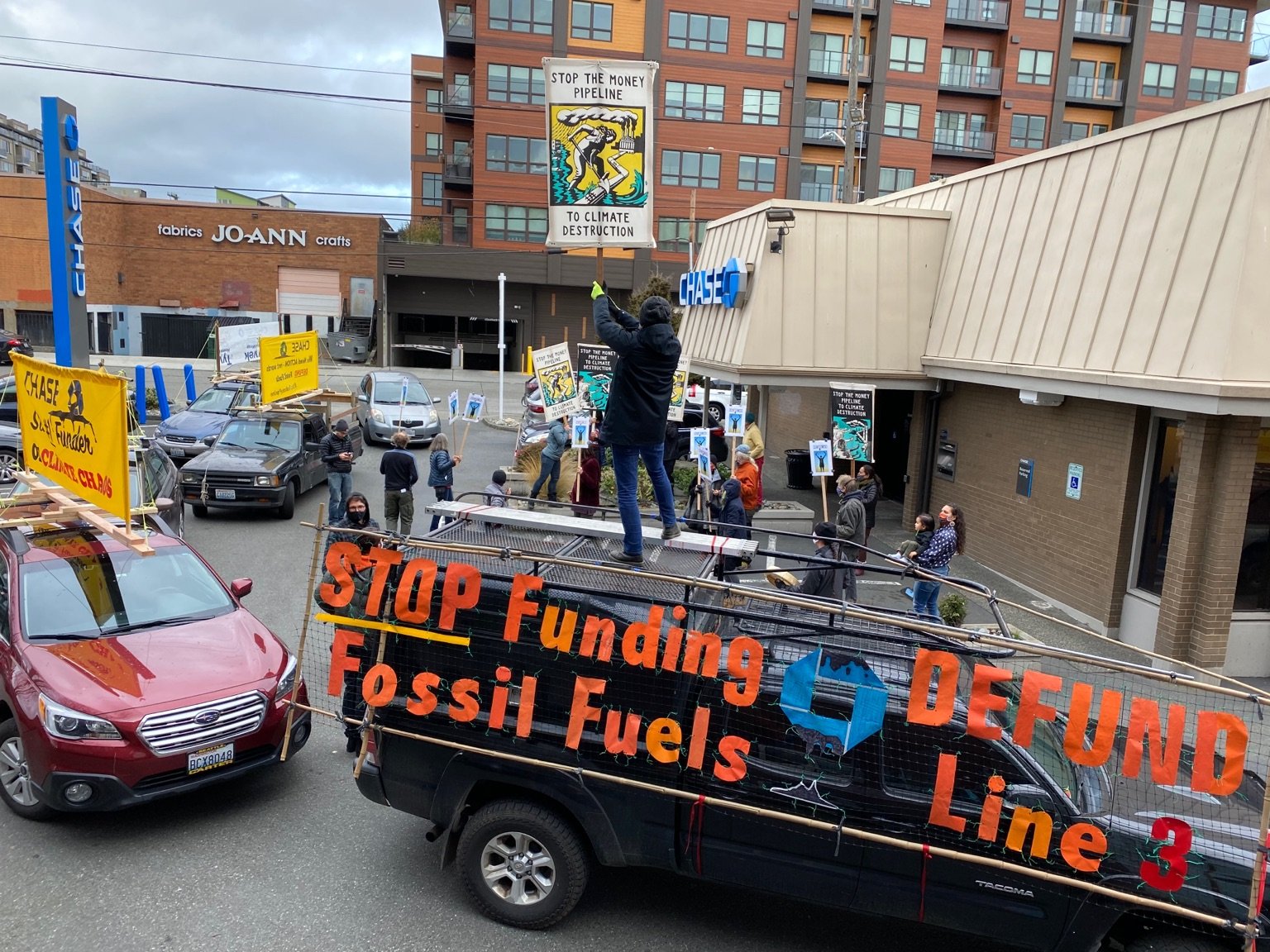 WASHINGTON, DC — Today across the nation, activists in 60 cities and 25 states plan to utilize COVID-safe and creative ways to deliver letters calling on major banks to distance themselves from the funding of the toxic Keystone XL and Enbridge’s Line 3 tar sands pipelines. These demonstrations are part of a day of action organized by Stop the Money Pipeline, a coalition of over 140 groups committed to ending the financial sector’s support for fossil fuels as a key pathway to decarbonization.

Amid an intense spike in COVID-related deaths and infections and stay home orders, the activists plan a “COVID-safe” Day of Action where hundreds of individuals will deliver letters to local bank branches and insurance offices of the major funders and insurers of fossil fuel investments calling on them to not fund or insure the Keystone XL and Line 3 tar sands projects.

“You would have thought that Wall Street would have learned their lesson,” said Alec Connon, Stop the Money Pipeline Coalition Co-Coordinator. “In 2016, the resistance to the Dakota Access pipeline hit the financial sector hard. Protests were held at bank branches throughout the country. Thousands of people pulled their money out of Wall Street banks. City governments stopped banking with the funders of the pipeline. Yet once again, Wall Street is complicit in funding an oil pipeline that violates Indigenous treaty rights and damages our climate. They can expect the backlash to be every bit as fierce as it was at Standing Rock.”

In Seattle, activists will be participating in a car caravan, attaching large #DefundLine3 banners to trucks and cars, and taking the car caravan to Chase branches across the city. They will occupy the street outside of both Chase and Liberty Mutual’s regional HQ, as activists go inside to deliver the letters in a COVID-safe fashion. In Portland, organizers will be taking a decommissioned fire truck to downtown Chase branches to demand that Chase helps put out the fires of the climate crisis.

Actions are planned in New York City, Washington DC, San Francisco, Denver, Boston, Chicago, Cincinnati, Madison, Minneapolis, and Charlotte. In Boston, Climate Finance Action will make deliveries to Liberty Mutual and BlackRock offices. In the Bay Area, activists will visit at least twenty bank branches in cities across the region. In Washington, DC activists with Shut Down DC will be delivering the letter to a branch of Chase Bank, Bank of America, Wells Fargo, and Citibank, with banker CEO puppets, signs, banners, and chants. In Colorado, activists in Denver, Boulder, and Colorado Springs will be participating along with others in 25 states to carry out COVID-safe letter deliveries at local bank branches and insurance offices.

This is a particularly crucial time for activists seeking to push the financial sector away from financing climate emergency. Many are looking at building momentum leading up to the late March 2021 renewal date for Enbridge’s $2.1-billion credit facility. Eighteen banks are on the existing loan, including Chase, Citibank, and Bank of aAmerica. Keystone XL is also entering a key financing period, with TC Energy currently trying to secure a $4.5-billion loan for the project before year-end.

“These financial institutions continue to be the drivers of the climate crisis. They continue to finance, and profit from, fossil fuel projects such as Line 3, TransMountain, and the Keystone XL pipelines that knowingly violate the treaty rights of Tribal Nations. Our Tribal communities continue to push back against and resist these earth-destroying projects,” said Matt Remle (Lakota), co-founder of Mazaksa Talks. “People need to pick a side — stand with those protecting the air, water, lands, and health of communities for all peoples, or with those profiting from the destruction of the air, water, lands, and health of our communities. It’s that simple.””

Tar sands pipeline are problematic due to their toxic impact on water and the environment. But the potential for destructive impacts is even higher during a pandemic. Enbridge’s Line 3 could bring thousands of workers into Tribal lands in northern Minnesota, as COVID is spreading more rapidly than ever before. Additionally, worker camps have been proven to contribute to sexual violence and trafficking against Indigenous women.  If built, Line 3 would violate Ojibwe treaty rights, release as much greenhouse gas pollution as 50 new coal-fired power plants, and put Minnesota’s water, ecosystems, and communities at risk.

Activists and Indigenous communities are fighting to hold off construction until lawsuits can progress, and until the incoming presidential administration of Joe Biden and Kamala Harris takes office and could conceivably stop Line 3 by rescinding federal permits.

“This pipeline isn’t about the so-called ‘safe’ transportation of a necessary product it’s the final gasp of a dying industry desperately trying to perpetuate fossil fuel use in a society that knows its past time to make better choices for energy use,” said Amy Gray, Stop the Money Pipeline Coalition Co-Coordinator. “All tar-sands pipelines leak, and they wreak havoc from the extraction at the tar sands through the route of the pipeline all the way to the communities who live in the shadow of the refineries. It’s time for Wall Street to stop funding these dangerous pipelines, respect Indigenous sovereignty and frontline communities, and reinvest in a just and equitable transition to renewable energy.”

The coalition plans to deliver a cover letter from Stop the Money Pipeline and the Indigenous Women’s Tar Sands letter which was sent last month to the CEOs of 70 major financial companies and insurers. The letter calls on institutions to respect Tribal rights and end all ties to tar sands pipelines. In support of the Indigenous women authors, over 150 organizations representing millions of supporters have signed onto the letter’s demands to stop Line 3, Keystone XL, Trans Mountain, and other tar sands expansion projects.

“Line 3 and Keystone XL are fossil-fueled disasters. These pipelines violate Indigenous rights and would wreck the climate — our analysis shows constructing both would be the equivalent of building hundreds of new coal plants. Supporting projects like Line 3 and Keystone XL in 2020 is unconscionable, and we’re taking action to show financial institutions that the movement for climate justice won’t let them get away with it any longer,” said Collin Rees, Senior Campaigner at Oil Change International.

“Line 3, Keystone XL, and all tar sands extraction and pipelines must be stopped immediately and financial institutions much be held accountable for their role in financing these projects and perpetuating further Indigenous rights violations, destruction of the climate, escalating harms to public health during a pandemic, and increased rates of violence toward Indigenous women living near ‘man camps’ associated with pipeline construction. As multiple crises in 2020 proliferate, business as usual must not and cannot continue. We must heed the call of Indigenous women leaders,” said Osprey Orielle Lake, Executive Director of the Women’s Earth and Climate Action Network International.

“Here in DC, we are committed to fighting to #Stopline3 and demand #NoKXL. We came out today to put Chase, Bank of America, Wells Fargo, and Citibank on notice that they better not fund the two remaining pipelines of the toxic tar sands project,” said Liz Butler, organizer with Shut Down DC.

“This project is an insult to people in younger generations like mine who will be forced to live with the disastrous consequences of climate chaos and trashed wetlands here in Minnesota. Even worse, it is an assault on the fundamental rights of Indigenous communities and an intolerable continuation of settler colonialism,” said Sasha Lewis-Norelle of Sunrise St. Paul.

“Toward righting the ongoing wrongs of our European ancestors, we deliver these letters in solidarity with the 41 Indigenous Women who have patiently asked CEOs of major global asset managers, banks, and insurers: With fossil fuel corporations plowing ahead with pipeline construction in the midst of a global pandemic and massive financial meltdown, we urge your institutions to immediately decline any support for TC Energy’s Keystone XL pipeline, Enbridge’s Line 3 pipeline, and the Canadian government’s Trans Mountain pipeline — and to cut ties with these tar sands projects and companies,” said Cheryl Barnds, co-chair of the Rapid Shift Network.

“As oil stocks plummeted this year, wildfires raged and clean water became more scarce than ever; somehow banks like Chase, Wells Fargo, Bank of America, and others still think it’s ok to invest in fossil fuel infrastructure like Enbridge’s Line 3 and KXL. There is no logic, aside from greed. Indigenous rights abuses continue to be perpetuated by the industry, and climate chaos is not a thing of the future any more, it is NOW. We are in the final hour to save our planet from hundreds of years of runaway climate change. Big banks must stop funding fossil fuel infrastructure immediately,” said Kellie Berns, Program Director at Earth Guardians.

“We must end all tar sands extraction and pipeline projects immediately! Line 3 and KXL are violating Indigenous rights and pose devastating health risks to the Indigenous communities surrounding these sites, as well as to our planet overall. It’s unconscionable that these projects were even considered, let alone moving forward in the middle of a pandemic. We took action today to expose the financial institutions bankrolling these projects like Chase, Bank of America, and Wells Fargo to demand that they respect tribal rights and immediately end all ties to tar sands pipelines. Listen to Indigenous women leaders!” said Erika This Patterson, Campaign Director at Action Center on Race & the Economy.