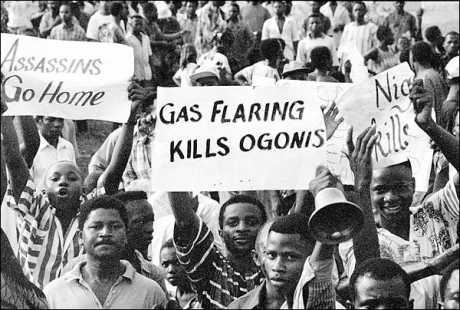 They were hanged after spending 17 months in police custody followed by a sham trial where they were sentenced to death. Their only crime? Exposing the devastating impact that Shell Petroleum Development Company’s extraction of fossil fuels from the Niger Delta had on the Ogoni land, lives, and livelihoods.

The nine men who were executed were leaders of the Movement for the Survival of the Ogoni People (MOSOP). They were at the forefront of a campaign to protect Ogoniland, in the Niger Delta in southeastern Nigeria, from the devastating impacts of what was then already decades of oil and gas development.

Ken Saro-Wiwa, a well-recognized author, along with MOSOP, led a campaign against the Shell in the early 1990s. The campaign was one for human rights and the environment, and it lit a fire in many. At one protest in 1993, 300,000 Ogonis, about 60 percent of the whole population, came out into the streets; following this, January 4 became known as Ogoni Day.

Many of the activists and organizations that continue the fight today against the oil and gas industry have been shaped by the struggles of the Ogoni in Nigeria. Nigerian activist and poet Nnimmo Bassey, was one of many whose lifelong commitment to environmental campaigning was solidified by Saro-Wiwa’s death. He shares: 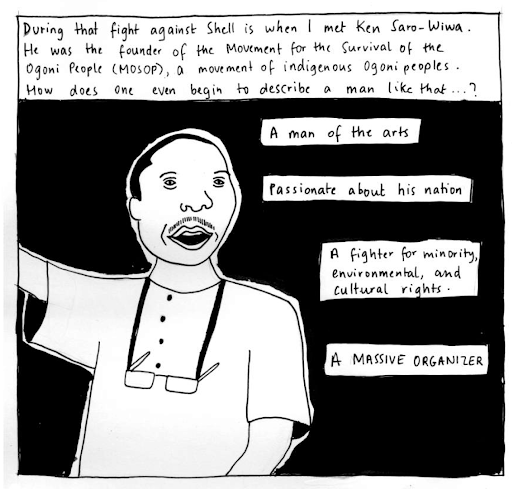 While the executions of the Ogoni 9 resulted in international condemnation of the Nigerian dictatorship, the persecution of the Ogoni continued, as did the devastation wreaked by Shell and other oil interests in the broader Niger Delta. To this day, communities in the Delta face continued impacts from oil spills and gas flaring.

You can learn more and support current movements for the rights of Ogoni people here:

Movement for the Survival of the Ogoni People (MOSOP)

Oil Change International was founded based on the conviction that shedding more light on struggles like these, amplifying voices from the frontlines, exposing the true costs of fossil fuels — could not only lessen the chances of similar tragedies but could also begin to tarnish the industry’s social license, and to begin to chip away at the power structures propping up Big Oil and Gas.

Twenty-five years on from this particular tragedy, the oil industry continues to devastate the environment and threaten the health of communities — in Nigeria, in Texas, in Argentina, the list goes on.

Twenty-five years on, land and environmental defenders continue to be our first line of defense against extractive industries and the climate crisis, and they continue to be threatened and killed for efforts to fight this pollution and devastation.

Twenty-five years on, we have not forgotten that Shell has the blood of the Ogoni 9 and many more on their hands, and we will continue to hold them accountable.

As we continue our campaigns to pressure decisionmakers to make change at the structural level, we must also support the struggles of the communities on the frontlines. We need to remember those whose lives were unjustly stolen for merely protecting their families and their land.

Saro-Wiwa’s last words still resonate today, “Lord take my soul, but the struggle continues.” Black Lives Matter, everywhere. They always have and they always will.