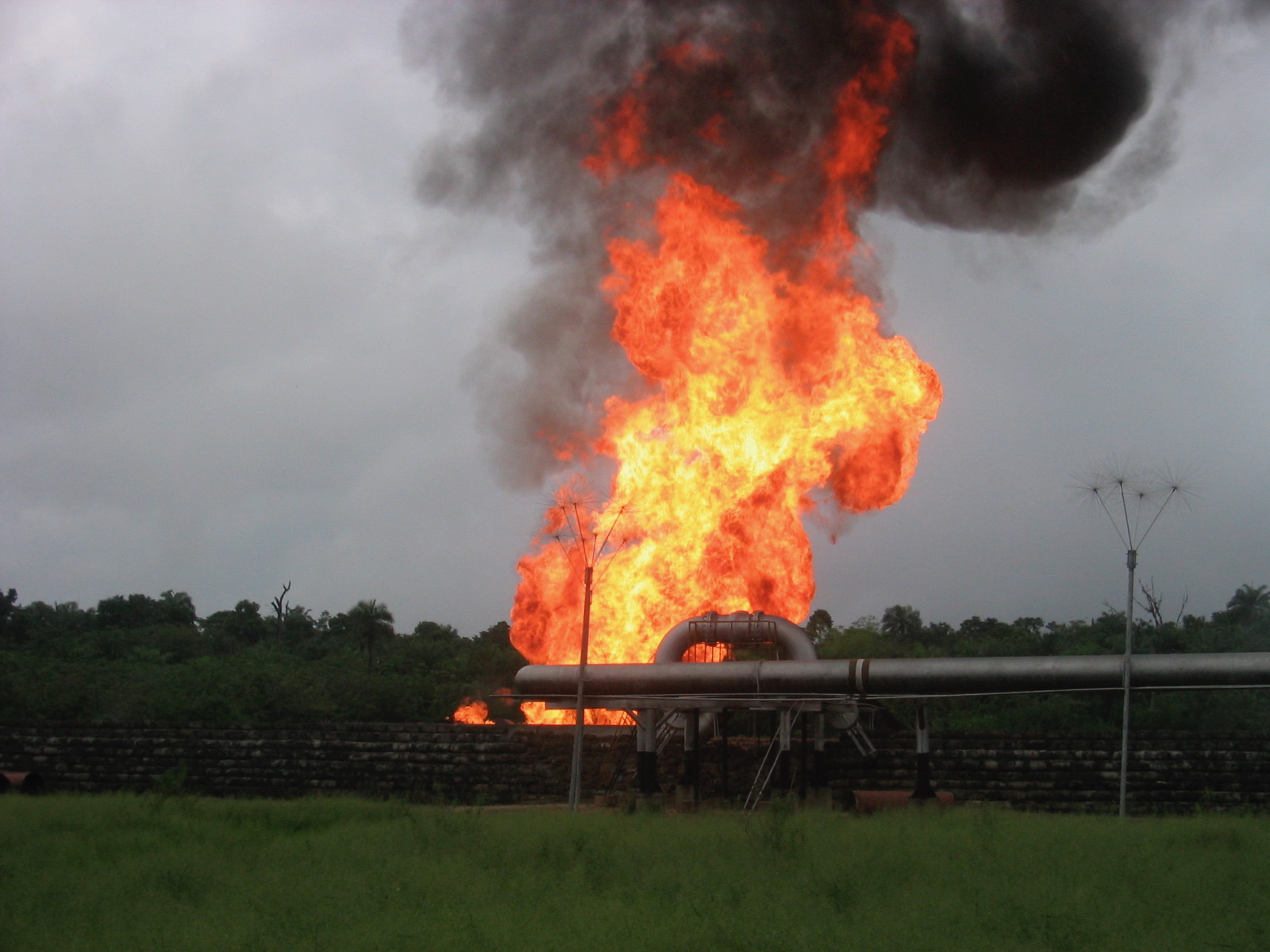 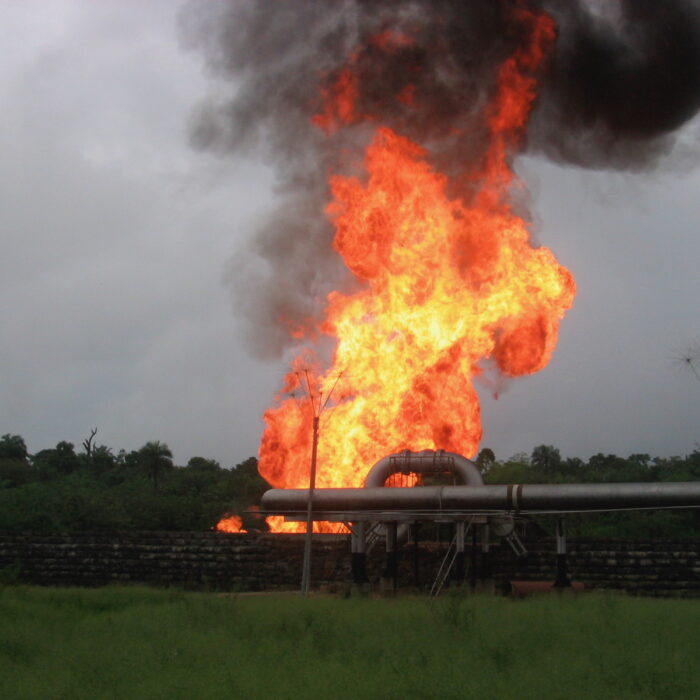 Twenty-five years ago today, on November 10, 1995, Ken Saro-Wiwa, a well-known Nigerian author and environmentalist, and eight other Ogoni activists were hanged by the Nigerian dictatorship in Port Harcourt. Their only crime was to so effectively communicate their opposition to the devastating impacts of Shell Petroleum Development Corporation’s oil and gas exploitation on their homeland in the Niger Delta in southeastern Nigeria.

The nine men who were executed — Saro-Wiwa, Saturday Dobee, Nordu Eawo, Daniel Gbooko, Paul Levera, Felix Nuate, Baribor Bera, Barinem Kiobel, and John Kpuine — were leaders of the Movement for the Survival of the Ogoni People (MOSOP). They were at the forefront of a campaign to protect their communities from the impacts of oil development — the pollution of the land, water, and air; the debilitating health and development impacts; the rampant destruction of the fabric of their communities; and the violent response by the Nigerian military to this resistance — all for the profit of a few: the political and business elite and a massive multinational corporation.

National and international environmental and human rights groups had been working for months to pressure Shell and the Nigerian government to act to save the Ogoni 9, but in the end it was not enough. And though it did not save Saro-Wiwa and his comrades, the executions were swiftly and widely condemned by the international community. Beyond the withdrawal of several ambassadors, and the suspension of Nigeria from the Commonwealth, one of the most immediate responses was from the World Bank, which immediately announced that it would not support a $100 million loan to Nigeria for a liquefied natural gas project.

In the ensuing years, development finance institutions like the World Bank provided some spaces to level concerns about the moral consequences of fossil fuel development. Before carbon emissions and climate change became a driving force, development institutions (which have a mandate to alleviate poverty) were more receptive than many other financial actors on issues of environmental pollution and human rights.

In 2001, the World Bank Group initiated a three-year-long Extractive Industries Review (EIR) — an independent consultative process to consider the Bank’s future role in the oil, gas, and mining industries. The review itself recommended the Bank stop upstream coal and oil finance and “position itself to help adopt sustainable energy strategies that address the energy needs of the poor and that minimise climate change.”

But as with most change, progress was slow. The Bank’s Board of Directors rejected this recommendation in favor of incremental action focused on greater transparency. And yet, through the 2000s and early 2010s, the World Bank Group and other multilateral development banks continued to provide a forum for activists concerned about the environmental, human rights, and more lately, climate impacts of fossil fuel projects. Occasionally, campaigns succeeded in pressuring banks to halt finance to projects — for instance, the World Bank suspended finance to Chad in 2006 for the Chad-Cameroon pipeline because the government had failed to honor its agreement to use oil revenues for poverty alleviation.

In 2017, because of many years of effort on the part of activists and campaigners, the World Bank Group committed to stop financing all upstream fossil fuels. The European Investment Bank followed with an even stronger commitment in 2019 to halt virtually all fossil fuel finance. In these decisions, the urgency of climate action — in addition to the lack of evidence that oil and gas production had the desired development impacts — certainly weighed in heavily.

Over the last 25 years, the people of the Niger Delta have continued to suffer from the impacts of oil and gas development, and Shell and other oil corporations have continued oil and gas exploitation leading to oil spills and continued gas flaring.

On a trip to the Delta in 2006, I visited Goi, a community in Ogoniland that has been hit repeatedly by oil spills over the years. The river and agricultural lands have been terribly contaminated, but many of the villagers in the surrounding areas rely on fishing and farming, and have no choice but to subsist on contaminated crops and the remaining polluted fish and crabs. Despite ongoing attempts to stop it, gas flaring also continues in the Delta, emitting huge air and heat pollution just a few hundred yards away from peoples’ homes. These are just a few of the negative impacts on communities — communities seeing minimal benefits from this oil and gas production and bearing many of the costs.

This week, public development banks will be attending the Finance in Common Summit — the first global summit of all public development banks. In a statement, more than 200 movements and organizations from the Global South are calling on the 450 banks in attendance “to end public financing of fossil fuels and other harmful projects” and scale up “public financing to support the swift and just transition to renewable and democratic energy systems.”  They are also calling on the banks for debt justice. Groups from all over the world echoed these demands in a joint letter to the banks ahead of the summit.

Despite slow steps of progress, public development banks are still backing billions in oil, gas, and coal — Oil Change International estimates G20 institutions’ and MDBs’ support alone at USD 77 billion a year. These institutions have the opportunity — in the face not only of the local pollution, human rights issues, lack of development benefits or poverty alleviation, but also now, overwhelming evidence of the need to stop oil and gas development to slow the impacts of climate change — to take decisive action against financing for fossil fuels. But the majority of these institutions are still unwilling to commit on this issue, and those that are taking action, like France and the European Development Finance Institutions, leave significant loopholes to continue to finance fossil gas.

Next to the EIB’s leadership, the results of the United States presidential election this past weekend should only strengthen the hand of the multilateral banks where the United States holds a share — Joe Biden and Kamala Harris ran and won on a platform of climate action, ending fossil fuel subsidies and finance, and international re-engagement. All of these commitments, paired with climate justice movements that are stronger than ever, point to increased U.S. support for ending fossil fuel finance moving forward.

Time and again, fossil fuels have proven bad for development, bad for human rights, bad for the environment, and bad for the climate, while renewables are cheaper, effective in delivering energy access, and deliver the jobs needed for a just transition. To do anything less than stopping all public money going to fossil fuels dishonors the memory and sacrifices of Saro-Wiwa, the Ogoni 9, and countless others who have risked — and sometimes lost — their lives to defend their lands and communities.