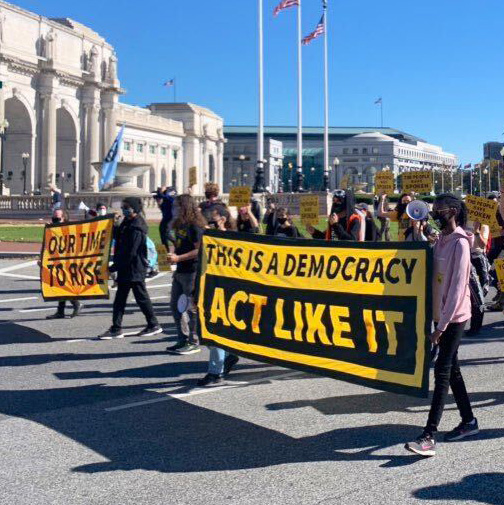 We’re in this together, and we’re going to get through the next few days by continuing to show up, calling each other to action, and appreciating the ones fighting right besides you – knowing that you are in a community of millions fighting for justice. These next few days, we will let those who want to corrupt our democracy know the strength of our voices and let them see the depth of our solidarity, and all we are willing to do to fight for each other. 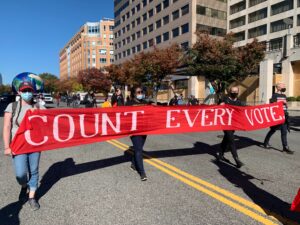 This week’s U.S. election was going to be a close election, and we knew counting all the votes would take time… and that’s what we’ve got. With millions of valid ballots still to be processed in key states, it’s clear that the election isn’t over. There is no final result until every single vote is counted and our democracy is protected.

In a nation with a long history and current acts of racism and voter suppression, any attempt to prematurely end the counting of people’s votes is dangerous and unacceptable. This is a critical moment to stand up for the rights of voters across the nation and fight to ensure their votes matter.

While there’s still work to be done to defend democracy and ensure that every vote is counted, candidates and voters this cycle made a strong statement the climate crisis is a top-tier issue of concern. Hundreds of millions of people turned out to vote in an election dominated by discussions of the tragic COVID-19 pandemic and, for the first time, the climate crisis, and environmental justice. As wildfires continue to rage across the West and hurricanes continue to threaten our coasts, the threat of the climate crisis was on the minds of voters in races up and down the ballot. 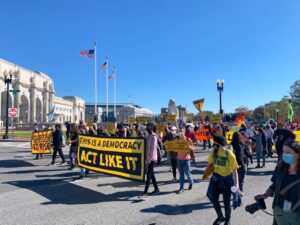 In a huge victory against Big Oil, the dangerous Amendment 5 ballot measure in Louisiana that would have given billions to the fossil fuel industry was soundly defeated by voters.

Thank you for all that you have done so far, and for the fighting you will continue to do.The election isn’t over until every vote is counted and we respect the principles of a free and fair democracy. We must come together to fight back against attempts to damage democracy, protect communities, and ensure every single vote is counted.