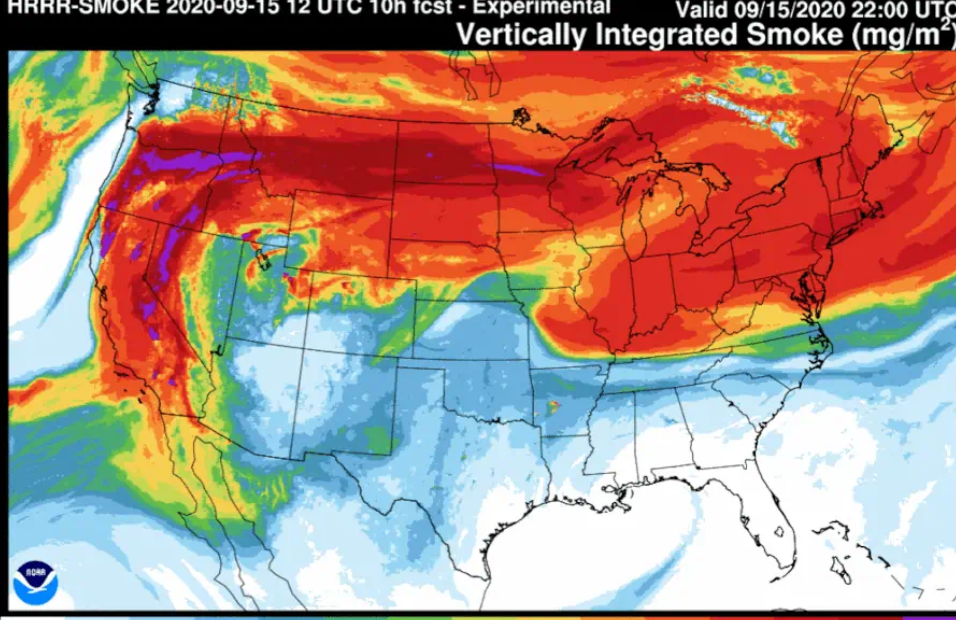 The deadly future that scientists warned us about is here. For years, climate scientists modeled how if we made the earth hotter, the heat had consequences. Unrelenting heat dries vegetation and makes it more likely to burn. It warms the oceans, increasing the fuel available for tropical cyclones.

The U.S. right now is caught between a rock and hard place. East and West. The West is on fire. The East now stands in the path of five potentially deadly storms.

Out West, we know the toll the devastating wildfires has wrecked on communities, cities, and people. Dozens of people are missing and at least 23 are dead, communities are destroyed, and millions have literally been struggling to breathe.

The size of the fires is staggering. The fires have burnt over 3.3m acres of California, 1m acres in Oregon, and more than 620,000 acres in Washington state.

The air quality was some of the worst in the entire world, considered “unhealthy” or “very unhealthy” to breathe. Yesterday the Guardian reported, “four west coast cities in the U.S. currently rank in the top 10 for worst air quality in the world, as wildfires rage up and down the western seaboard, cloaking the entire region in smoke.”

The paper continued, “Portland, Oregon, and Seattle, Washington, hold the No 1 and No 2 spots, while San Francisco and Los Angeles sit at four and six. Collectively, with the smoke from the wildfires, these four cities have knocked every city in China out of the top 10 for worst air quality.”

And yesterday, the smoke from the fires actually made it to DC and the East coast. It is predicted to hang around until Thursday. So large parts of the country are now chocking and experiencing severe smoke conditions.

I don’t recall ever being able to take a direct picture of the sun without a filter of some kind. Quite the wildfire smoke filled sunrise this morning in Maryland #MdWx @capitalweather @hbwx @JustinWeather @TenaciousTopper pic.twitter.com/ksj6ciI9ro

This is not the only problem on the Eastern coast. Out East, the situation is equally dire. For only the second time in recorded history, five tropical cyclones are churning in the Atlantic Ocean at the same time.

Earlier today, the National Hurricane Center in Miami warned that the closest Cyclone to land, Hurricane Sally, was crawling Northwestward towards the Gulf Coast” and that “historic flooding is possible” with “extreme life-threatening flooding likely through Wednesday along portions of the northern Gulf Coast.”

It threatens several southern U.S. states including Florida, Mississippi and Alabama, with the later two states already declaring a state of emergency.

Meteorologists are warning that some 30 inches of rain could fall within 24 hours along the Gulf Coast.

“When it comes to heat waves, we see that climate change is an absolute game-changer,” argues Friederike Otto, a climate scientist at the University of Oxford.

The hydro-climatologist, and member of the U.S. National Academy of Sciences, Peter Gleick, described himself as a choking, gasping Californian when he wrote last week, “while fires in the west are not unusual or unexpected, these fires are different: they’re earlier, bigger, and hotter than usual… Seven of the 10 largest fires have occurred in the last four years. This isn’t normal. What’s different now? Human-caused climate change.”

Despite what President Trump would have you believe, Gleick wrote, “the links between human-caused climate change and extreme events are real, dangerous, and worsening… The influence of climate change on wildfires is easy to see… Eighty percent of California, 95% of Oregon, and all of Colorado, Utah, Arizona, and New Mexico are currently in drought.”

“This shouldn’t come as a surprise to anyone,” Michael Gerrard, director of the Sabin Center for Climate Change Law at Columbia University, told the Los Angeles Times. “Maybe we underestimated the magnitude and speed” at which these events would occur, but “we’ve seen this long freight train barreling down on us for decades, and now the locomotive is on top of us, with no caboose in sight.”

The air is getting hotter and dryer, the droughts are getting longer, the forest is getting more flammable. The future is getting more terrifying. “It’s not so much that climate change is destabilizing historical weather patterns,” argues Daniel Swain, a climate scientist at the University of California. “In many cases, it’s amplifying them.”

Swain argues that in California, “the fires that we’re seeing are larger, and faster moving, and more intense than those you could have expected historically.”

Indeed, when you look at historical records, scientists argue that we are now on course to reach what they term a “Hothouse” state not seen in 50 million years.

Climate change is driving our extreme weather and not just in the United States. “The planet is showing signs it’s in peril. In recent weeks, the world has seen ferocious wildfires in the U.S. West, torrential rains in Africa, weirdly warm temperatures on the surface of tropical oceans, and record heat waves from California to the Siberian Arctic”, reported Reuters recently.

In West and Central Africa, some 1.5 million people have been affected by severe flooding in recent weeks, with over one hundred killed. The list of countries affected includes Burkina Faso, Cameroon, Chad, Ghana, Niger, Mali, Nigeria, Congo Republic, Senegal, and Sudan.

We have to act now to stop this. “If the fires of 2020 horrify you, as they should, consider that by 2050, when the benefits of fast climate action will only begin to arrive, the area burned annually in the west is expected to have at least doubled, and perhaps quadrupled, “ wrote David Wallace-Wells last week in the New York Magazine last week.

Working with other civil society organizations, which are part of the Last Chance Alliance, OCI is calling for this drilling to stop. To add your voice go here. It’s not too late to join the debate on Twitter either. Demand your right to breathe clean air.